Auburn is trailing South Carolina, and it still hasn’t been the Tigers day offensively. Quarterback Bo Nix has struggled with turnovers and miscommunication, and that came to a head on the sidelines during the third quarter.

Following one of those offensive possessions that ended due to a third-down incompletion from Nix intended for wide receiver Seth Williams, the two carried their frustrations to the sideline. Josh Vitale, an Auburn beat writer for the Montgomery Advertiser, caught the exchange and shared it to Twitter.

Some frustration on Auburn's sidelines after that last offensive possession. Chad Morris trying to be the mediator between Bo Nix and Seth Williams.pic.twitter.com/ve1NWgRoVv

As you can see, new offensive coordinator Chad Morris had to act as a mediator and stayed with Nix to talk through what went wrong on the previous possession.

It has not been Nix’s best day. He’s already thrown two interceptions, both of which have been a major factor in South Carolina staying in — and even winning — the football game. It hasn’t just been those two throws, however. There have been constant miscues all day despite the fact that the Tigers have 19 points and are currently 7-of-12 on third-down conversions.

The honeymoon phase with Nix, Morris and Williams is officially over. The frustrations are mounting.

Update: It continues to go downhill for Auburn, as Nix threw his third interception of the game that was returned to the Tigers’ 8-yard line. South Carolina scored on the next play to go up 27-19 with 54 seconds left in the third quarter. 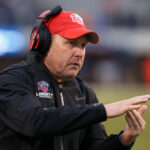 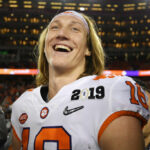