Let’s check back in with boxer Ebanie Bridges and that eye that was swollen shut during her boxing match last week where she lost a 10-round decision to British fighter Shannon Courtenay. “My eyes bigger than my boob… is it?” the Australian math teacher (5-1-0) asked after the loss. Uh, close.

The good news is that time heals all wounds and that includes Ebanie’s eye that now looks like she’s been transformed into the Terminator. I’m no optometrist, but it sure looks like Ebanie has some broken blood vessels in there. Again, I’m no doctor. Just an observation.

I see more than one similarity 🤷🏼‍♀️🤣🤣🤣 pic.twitter.com/vNXElDIyHW

As I suspected, Bridges earned herself a new contract with her performance last week. Boxing Australia announced Friday that the Blonde Bomber had her contract extended for the performance she “put on…inside and outside the boxing ring.”

This was an absolutely brilliant move by the Australian boxing promoter because the bare-knuckle fighting organization where Paige VanZant fights sure could use someone like Bridges who’s willing to get her eye blasted to sell pay-per-views.

“I couldn’t see for the last three rounds,” Bridges said after the fight. “But I was like, ‘Please don’t ask me if I can see, because I’m not f—ing quitting. I don’t quit.’” 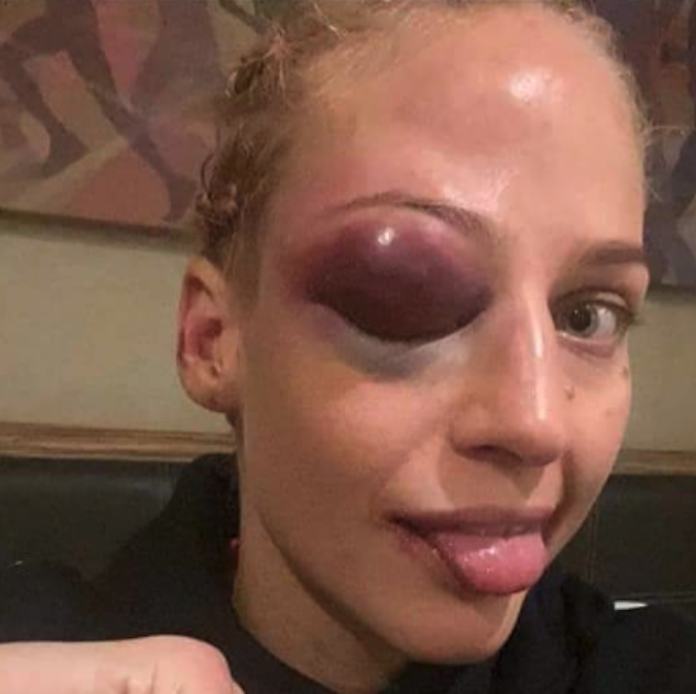 “My eyes bigger than my boob… is it?” Hhaha @KuganCassius “no comment” loll I always make Kugan uncomfortable 🤣🤣😜

Shout to edwardooo for getting me over to the UK finally, can’t wait for the next one