Bishop Sycamore football coach Leroy (Roy) Johnson, whose team of random online post-grads lost two games in 48 hours over the weekend, including being trounced by IMG Academy 58-0 on ESPN, faces an active warrant out of Delaware, Ohio, and multiple civil lawsuits, according to court documents obtained by OutKick.

The bench warrant for failure to appear in a domestic violence case, which was eventually dropped to a criminal mischief charge, was issued July 2 by the Delaware County Sheriff’s Office and remains active.

Then Friday, a Franklin County judge ruled Johnson and Jay Richardson, a former Ohio State Buckeye and current Columbus prep sports TV personality, will go to trial for defaulting on a $100,000 loan issued in April 2018 that was never repaid to First Merchants Bank.

“Defendants’ failure to answer the request for admission served upon them proves fatal to their cause,” the court wrote in its decision. “Because of this failure, Defendants have admitted to the Bank’s claim of fraudulent misrepresentation, conversion, and unjust enrichment.”

The $100,000 loan issue has dogged Johnson since his time as head coach of Christians of Faith Academy, a precursor to his Bishop Sycamore football operation. Johnson also faces a 2019 civil lawsuit filed by ARN Hospitality, which owns a Delaware, OH Baymont Hotel where the head coach is believed to have housed football players in rooms for $81.19 a night during the fall of 2018. 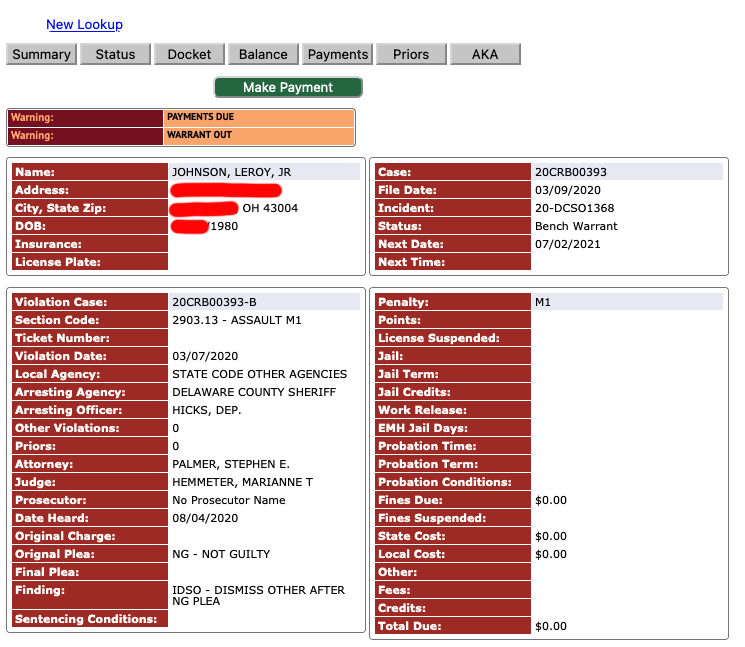 “During the parties’ dealings and the course of negotiations, Defendant Johnson represented to Plaintiff that he and COF Academy had sufficient funds and creditworthiness to pay for the room rental,” the lawsuit reads.

Baymont says Johnson and his guests left “without paying any portion of the outstanding balance owed for the rooms.”

The “Bishop” in Bishop Sycamore means “Overseer.” I am the “Overseer” in this program. If you have a issue with what we do, how we do it and why we do it… by all means… contact me… not my young men!!! You can talk to us… you can play us… you can scrimmage us. Or you can🤫!

It’s not just housing that has presented a challenge for Johnson. In a 2018 Columbus Dispatch story, LVL Up Sports Paintball Park in suburban Columbus claimed Johnson brought his team over for some bonding. The football players “shot thousands of paintballs” and had fun, according to the owner. Johnson allegedly told owner Dave Pando that “the person who was supposed to pay” the bill that was over $1,000 would stop later in the day to pay the tab. A credit card was left with Pando, but nobody ever showed up to pay the bill.

Johnson’s team went through 20,000 paintballs and four hours of staffing. When Pando ran the credit card, it was useless.

That same year, a Columbus training facility told the Dispatch that Johnson had racked up a bill totaling $7,720 that wasn’t paid. “A consistent theme about this is that Roy is very convincing with the purpose of the school and the story and all of that,” SuperKick Columbus owner Jim Waters told the newspaper.

ESPN’s Acting Like It Was Scammed Into Broadcasting Terrible Ohio HS Football Team Vs. IMG Academy

Now the man with a warrant out for his arrest and multiple civil lawsuits is fielding a football team against IMG Academy on ESPN. How does that happen? A former Ohio High School Athletic Association investigator who trailed Johnson for years told OutKick that Bishop Sycamore fills a perfect void for national powerhouses. The former official said that programs inside Ohio know all about Johnson and Bishop Sycamore, but schools like (Akron) Hoban and Lakewood St. Edward “would rather play an illegitimate school than have a bye,” the former OHSAA official added.

Is Roy Johnson running a scam? That depends on what you consider a scam. In a Twitter chat held Monday afternoon, the coach explained that students attend classes online. The school doesn’t have a building. It doesn’t have a dedicated practice facility. Johnson even joked that his team will practice on an open parking lot if that’s all they can find. The coach says that underage players on his team stay with him, while the players 18 and older live in random places as if they’re in college.

During the Twitter chat, Johnson tried to explain how this whole Bishop Sycamore thing works. “We rent space a few days a week to go over our classroom stuff class, work stuff,” the coach said. “That’s in the eastern area so you can kind of get us there in a few days a week that we have school. Remember we’re not a traditional school, so we don’t have our young men sitting in school from 7:00 AM,” he added.

Bishop Sycamore is an untraditional school with just five wins since Johnson flipped the script from the COF Academy to his new incarnation. The school went 0-6 in 2020 and was outscored 227-42. Through the first two games, this season things haven’t been much better. They’re being outscored 96-0 and head next to Paintsville, Kentucky to face Johnson Central.

When asked Monday what Johnson will do at the quarterback position after running out of quarterbacks against IMG, the coach who could sell a used car to a used car salesman, said he had a plan in the form of some kid named Trilian Harris out of California.

“He did a great job at the last minute coming in there and throwing the ball around and whipping it around and so you know we’re really confident with him and then you know what we do more than anything else and that’s played defense and play special teams,” Johnson said.

Pending the Delaware County Sheriff’s Department paying a visit to Roy, he’ll be on the road for some Friday night action with one of the most mysterious ‘high school’ football teams in the United States.