Transgender swimmer Lia Thomas’ total domination of biological females at the NCAA championships in Atlanta hit a bump in the road Friday night as the transgender national champion swimmer didn’t have enough in the tank to win a second national title.

Thomas finished a distant 5th in the 200 freestyle finals with a 1:43.40 after swimming a 1:42.09 in the prelims. Stanford’s Taylor Ruck won the national championship with a 1:41.12 to shock the world after Thomas held the nation’s fastest 200 freestyle time throughout the 2021-22 season until Friday at Georgia Tech’s McAuley Aquatic Center.

While Thomas was able to dominate the final 100 yards during the 500 freestyle, Friday night’s race was a completely different story. The Penn senior was never a factor as Taylor Ruck got out to a fast start and never looked back. 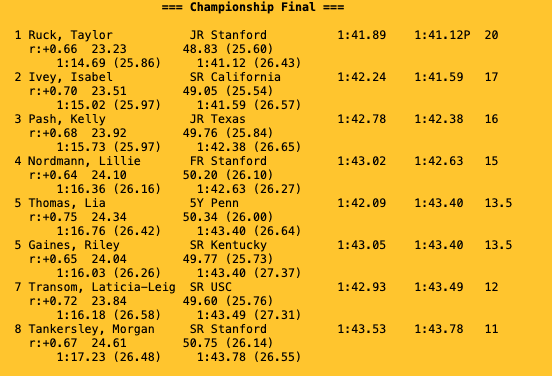 Congratulations to Taylor Ruck of @Stanford in the 200 free, and the other 6 women who swam! But let's remember Reilly Tiltmann of @UVA who was shut out of the top 8 by a man who didn't belong. #SaveWomensSports #SecondIsTheNewFirst

Thomas’ NCAA championship swimming schedule comes to a close Saturday in the 100 freestyle where Thomas doesn’t figure to factor into the championship picture after qualifying with the 10th fastest time in the nation.

From what we know out of the Sports Illustrated feature on Thomas, law school and training for the Olympics is supposedly on the table. SI writer Robert Sanchez says he was told by USA Swimming officials that it doesn’t have an issue with Thomas joining the team as long as the transgender rules on the books are met.