Josh Allen says he’s “at a loss for words” over how Bills fans reacted to news that Allen’s grandmother, Patricia, passed away unexpectedly Saturday at 80 years of age. Bills fans, led by the team’s Reddit page, started pouring in $17 donations to Buffalo’s Oishei Children’s Hospital. As of Monday afternoon, $34,650 had been donated, according to the hospital.

“You are making such an impact here for our patients,” Oishei Children’s Hospital said on Twitter. The hospital has since made a $17 donation button on its website that is easily visible to Bills fans. The button features a Bills Zubaz design.

“I can’t tell you how special it is to see the outpouring of support for me and my family during this tough time,” Allen said via the Bills website. “The donations made to OCH in honor of my grandmother would make her so proud. Thank you Bills Mafia! It is an honor to be your quarterback.”

Less than 24 hours after his grandmother’s death, Allen played one of the best games of his short career. He completed 31 of 38 passes for 415 yards and three touchdowns and added a rushing touchdown. The Bills beat the Seahawks 44-34 and are now 7-2. Allen’s record two and a half years into his NFL career sits at 22-14.

“It was a very rough day yesterday but grammy wouldn’t have had it any other way but to have Josh out on that field with his family/teammates,” Josh’s mother tweeted. “She lived for Sundays to watch her grandson and favorite team the Bills. Grammy and Papa had the best seats in the house.”

This isn’t the first time Bills fans have rallied around a quarterback with donations. Fans donated $14 increments to Andy Dalton’s charity in 2017 after the quarterback led the Bengals to a late touchdown in Week 17. The Bills ultimately beat the Ravens and made their first playoff appearance since 1999. Over $400,000 was raised for Dalton’s charity.

At a loss for words. Buffalo, I love you. https://t.co/HdhoK0zUp3 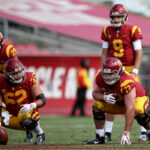 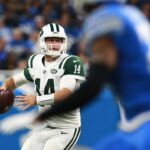