The Spectator will name Ben Domenech its Editor at Large on Tuesday, OutKick has learned.

At The Spectator, Domenech will publish a monthly column in the magazine and direct new voices to the project.

“Domenech is a great addition to the magazine and brings invaluable expertise to our growing project,” Zack Christenson, the publisher of The Spectator World, says. 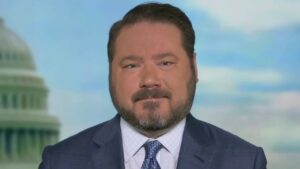 The Spectator features writers such as Douglas Murray, Amber Athey and Stephen L. Miller with focuses on politics, culture, current affairs and the economy.

“Founded in 1828, The Spectator has been proud to describe itself as ‘the oldest continuously-published weekly in the English language,'” the company says.

The magazine offers separate online editions for the US, United Kingdom and Australia.

Earlier this year, Domenech left The Federalist, which he co-founded with Sean Davis in 2013.

Domenech will remain a contributor on the Fox News Channel and host a podcast on Fox News Radio in addition to his role with The Spectator.

Separately, Domenech is working on a documentary focused on the topic of abortion and Roe v. Wade, OutKick is told.

Domenech previously worked as a speechwriter for Secretary of Health and Human Services Tommy Thompson during the George W. Bush administration.