Disney will not feature Tim Allen as the voice of Buzz Lightyear in the upcoming Toy Story spinoff film.

Actress Patricia Heaton criticized Disney for the decision on Tuesday.

“Tim IS Buzz! Why would they completely castrate this iconic, beloved character?”

Here is why: According to various reports, Disney did not want to cast Allen because he has conservative beliefs.

Disney has been punishing talents for having conservative views for years. Political beliefs are primary factors in the hiring process for Disney properties like ESPN and Star Wars. Shout out to former Disney employee Gina Carano.

The woke have especially hated Allen since last year when he said he “kind of liked” how Donald Trump “pissed people off.”

That probably did it. 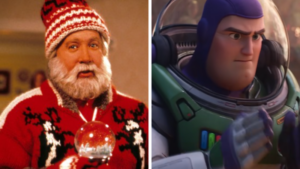 “Tim’s version of Buzz is a little goofier and is a little dumber, and so he is the comic relief,” MacLane told Vanity Fair.

Tim Allen made Buzz the character that he is. I say that as someone who once had a Buzz action figure.

But Disney has little interest in appeasing fans. The company is full of pandering weasels and its content is atrocious as a result.

To infinity, and beyond.