Another day has passed since the ongoing saga between Auburn football first began between Bryan Harsin and the administration on the Plains. People around the program are hoping this is getting closer to a resolution, but Thursday’s SEC coaches meeting is almost a line in the sand.

How we’ve gotten to this point is a touchy subject, no matter who you talk about it with. One side says they are looking out for the university, while the other said is obviously looking out for their power. We’re sitting at a poker table and both parties think they have the winning hand, not about to fold their cards, especially when they think their hand is the winner.

Here’s the kicker. Bryan Harsin is going to go about business as usual right now, because he’s still the head coach. Also, if he thinks that he’s done nothing wrong, then he will not just walk away or agree to a negotiated buyout. If he were to do this, then in some ways he’s admitting that he was doing something wrong at Auburn, it will be viewed as some sort of admission of wrongdoing. So, there’s absolutely no reason to walk away with some sort of buyout, especially if you’re telling folks you’ve done nothing wrong.

So, now that Harsin is back in the country that standoff continues, with all SEC football coaches scheduled to gather in Birmingham Thursday morning for their annual meeting. How can Auburn send Harsin to meet with other coaches in the conference when he doesn’t know his own fate at the moment. I would hope his lawyer is telling him to go about his business and keep doing everything he’s contractually obligated to do, even though the university is currently investigating how the program has been run.

This is also a problem for Auburn, in a big way. I grew up in Alabama and know how these money figures work behind the scenes. Trust me, it’s crazier than it sounds, especially when talking about past instances of meddling. But, this isn’t all about the big donor money, it’s about how Harsin has conducted himself while at Auburn. Whether that be his treatment and handling of former assistant coaches or players, to how he runs the day-to-day operations side of things. Someone is always looking over your shoulder at Auburn, sometimes deservedly so.

In this case, we’ve seen what happens in Auburn when someone decides they don’t like certain aspects of how you approach the job. We saw it with Tommy Tuberville, Gus Malzahn and now with Bryan Harsin. Hell, I imagine Athletic Director Allen Greene is constantly wondering if today will be his last day on the job. It’s gotten so weird inside the Athletic Department that they brought in someone else to run certain aspects of the Power Three sports at Auburn. The way it looks from the outside is that Auburn has an AD that has to run things up the chain to the ‘Super AD,’ which is something you don’t see at other schools.

But, back to this public relations nightmare that Auburn is currently sitting in. How does a university even think about bringing someone back, who they’ve let dangle in the wind for the last week, and not think it won’t hurt the overall state of the program. I promise you other coaches in the SEC are currently using this against the Tigers on the recruiting trail and will continue to do so until things start settling down. There will never be a ‘normal’ in Auburn, it just doesn’t work that way on the Plains. Nothing is ever simple, it always has to be complicated. This is the reason we are sitting here today with a coach that’s hanging on by a thread and a school that looks worse by the day.

It’s not as if this will all change overnight, once they come to a conclusion on the football situation. There’s always going to be someone lurking in the bushes, trying to decide how much power he or she wants that day. Here’s your perfect example. Bryan Harsin appeared at multiple events last week proudly wearing the Auburn colors, but when he gets on a flight for a family vacation, all hell breaks loose. Sorry, but this doesn’t just appear out of nowhere, and it didn’t. Auburn had been looking into a few things for the past few weeks. But, they finally decided it was time for it to be made public, so it did. See how things are working here?

Here’s something else for you. Auburn just updated on its website a section called. “Employee Duty to Cooperate Policy,” which pretty much states that the employee must cooperate with any kind of investigation or review. Now here’s the crazy part, it says on the document that this was made effective on February 8th, 2022. Yes, that was Tuesday, which makes this look even worse, even though I would hope there was already another version of this and that Auburn didn’t just come up with this policy for this certain case. Here’s the link 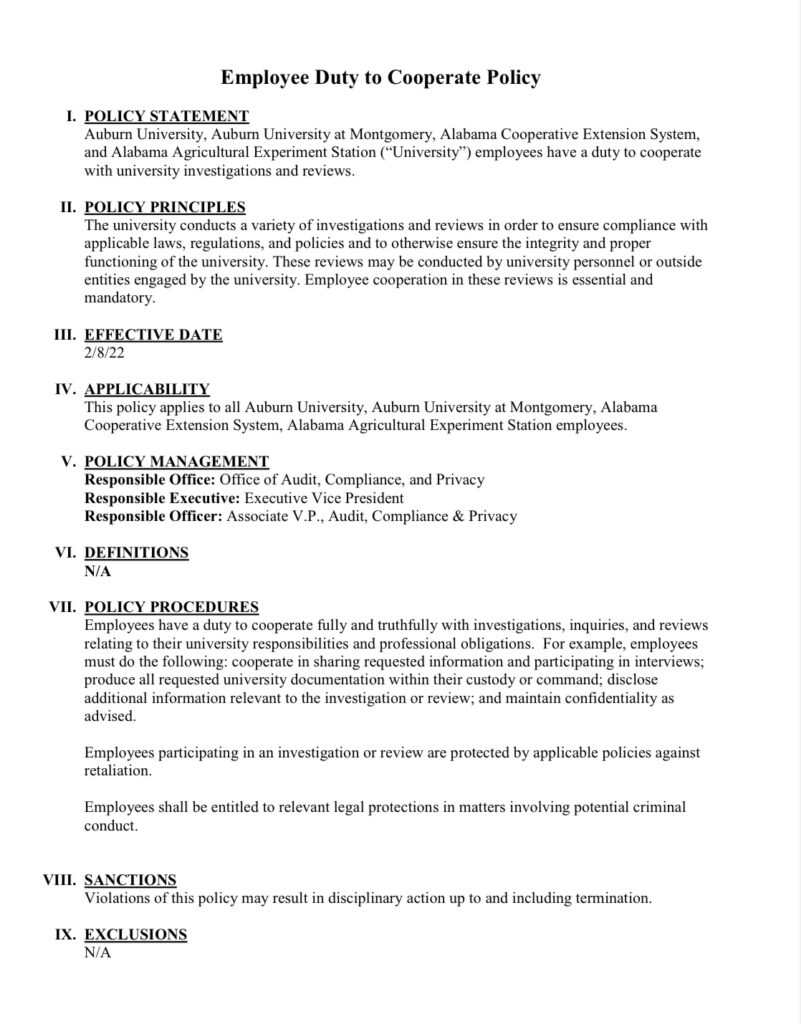 But now you’ve seen what kind of mess this situation can do to a university from a public relations standpoint. No matter how this turns out, Auburn looks sloppy in the process and the stain of another coaching hire gone bad will linger. Well, that’s until they potentially hire a new coach that can sell season tickets, then everyone will go back and make this look like a bump in the road of long-term success.

The decision to buy into that public relations mess will be up to you. Carry on, Auburn.