This summer, Ocasio-Cortez — calling her “AOC” is “disrespectful” but buy her $65 “AOC” shirts now — called for a boycott of Goya Foods after CEO Robert Unanue spoke publicly of his support for President Donald Trump.

Oh look, it’s the sound of me Googling “how to make your own Adobo” https://t.co/YOScAcyAnC

Ocasio-Cortez — write out the name, always – even sent a follow-up tweet to her ambitious followers with a recipe: 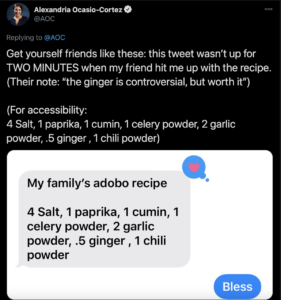 While Ocasio-Cortez’s tweet successfully prompted a #BoycottGoya, it also drove up Goya’s sales. By a lot. Check out this swing and a miss:

“She was actually our Employee of the Month … when she boycotted us, our sales actually increased 1,000%,” Goya Foods CEO Robert Unanue says. “We never were able to hand it to her, but she got Employee of the Month for bringing attention to GOYA and our adobo. Actually, our sales of adobo did very well after she said, ‘Make your own adobo.’ She’s our hero. She helped boost sales tremendously.”

This is the equivalent of a popular Twitter account quote-tweeting a video that the user hates and inadvertently driving up the view count, making the host more famous and rich.

Movie theaters, the tanking NBA, and all the businesses the Democrats have shut down that are still offering take-out now hope that Ocasio-Cortez will denounce their brands, too.