Antonio Brown has never been accused of being the sharpest tool in the NFL shed and he went ahead and proved that Thursday morning when he fired up Instagram Story and posted a text exchange with Tom Brady’s trainer Alex Guerrero that Big Brain — who also took shots at Bruce Arians by revealing texts — seemed to think made Guerrero look bad.

“Hey AG if we not going to work any more that’s fine Lmk about the 100k I paid you only fair get back half my money lmk how to proceed,” Brown texted Guerrero on Christmas Eve morning, two days before the Buccaneers beat Carolina on the road. Brown had 10 catches and 101 yards in that game. 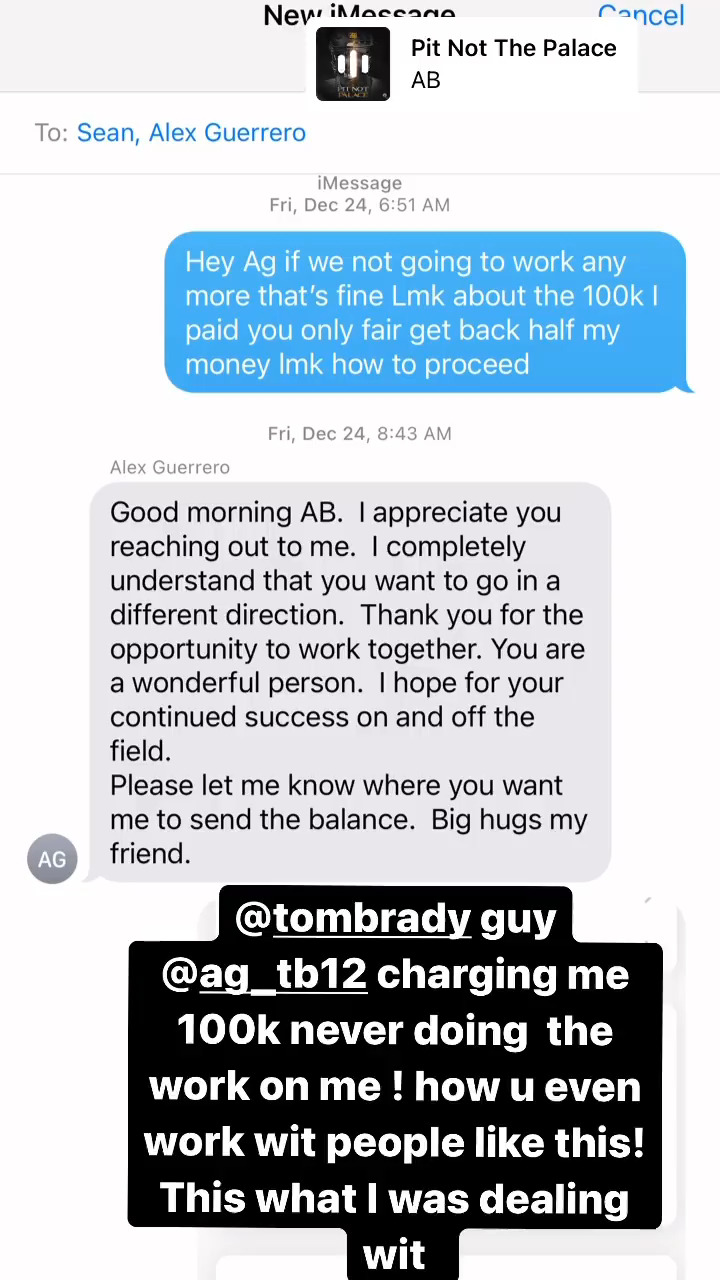 “Good morning AB. I appreciate you reaching out to me. I completely understand that you want to go in a different direction,” Guerrero texted. “Thank you for the opportunity to work together. You are a wonderful person. I hope for your continued success on and off the field. Please let me know where you want me to send the balance. Big hugs my friend.”

Seems innocent enough. A couple of guys agreed to part ways and settle up a balance.

Nope, Big Brain Brown isn’t done with Guerrero. Thursday morning Brown took a weird shot at the trainer by claiming he was charged $100,000 and the work wasn’t performed. “How u even work wit people like this!” Brown asked. “This what I was dealing wit.”

Maybe the guy is lit up with CTE. Or he’s just this big of a moron.

Brown wasn’t done with his dumb narrative. He jumped on Twitter and went further.

“Imagine your QB trainer charges you 100k then doing no work must be was a part of these guys plans all along,” he wrote.

We’re supposed to believe that Tom Brady and Alex Guerrero hatched a plot to steal $100k from Antonio Brown?

It’s sounding more and more like Big Brain is just this big of a moron.

Don’t get it twisted. My brothers have been good to me. From Tom to practice squad, we were a top-level unit. They have been good to me and knew nothing about my talks with coach last week. The team mishandled this situation. They let me down and, more importantly, my teammates.