We cannot blame one person for the demise of New York City. But we can say for certain that former New York Mayor Bill de Blasio is partly to blame.

And he’s back. If anyone votes for him, that is.

Friday, de Blasio announced on Morning Joe that he wasn’t teasing, that he is running in the Democratic primary for a newly drawn district representing Manhattan and Brooklyn.

“I’m declaring my candidacy for Congress in the 10th Congressional District in New York,” de Blasio said with glee.

“Polls show people are hurting. They need help, they need help fast, and they need leaders who could actually get them help now and know how to do it.”

True, but what does de Blasio running for Congress have to do with that? What’s he going to do to better any of those concerns?

De Blasio, a stupid man, left New York worse off in nearly every category, from crime rates to the economy to the appeal of the city.

During his time as mayor, he quoted and sympathized with Karl Marx and embroiled himself in campaign finance scandals.

Just 37 percent of city residents approved of this guy at the end of his run as Mayor of New York City.

The Radical Nets are getting another beauty to join their fanbase — Bill de Blasio, who many people are saying is the worst mayor in NYC history. pic.twitter.com/3XLZ87d2jb

That big Nets fan is the reason Kyrie Irving and another player not vaccinated against COVID-19 had to sit out of home games during the basketball season. In December, the de Blasio administration put in place a vaccine mandate for employers of venues like gyms.

Congressman Bill de Blasio. It doesn’t roll off the tongue.

De Blasio lacks the self-awareness to know that no one had missed him. Even New Yorkers are done with him. He ruined their city. 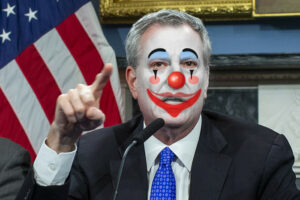