The multi-time cheating slugger and current ESPN baseball analyst took advantage of some down time to publicly display his affection for girlfriend Kathyrne Padgett. While vacationing in Italy, A-Rod and Padgett were photographed engaging in some European tonsil hockey.

Rodriguez, 46, and Padgett, 25, chose the island of Capri as the perfect spot for their budding romance. When not holding Padgett, Rodriguez opted to get handsy with a tambourine. 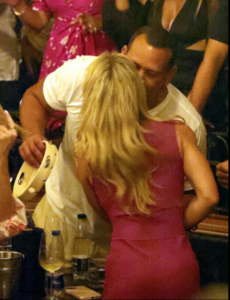 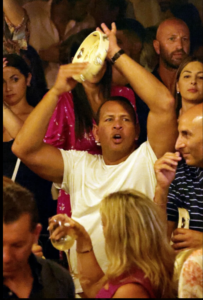 Fortunately (or maybe unfortunately) for Padgett, the tambourine and scenery kept the retired Rodriguez from falling asleep. The same couldn’t be said for these lovebirds last month when middle-aged A-Rod was caught catching some shut eye alongside Padgett at a Minnesota Timberwolves game.

Did Alex Rodriguez Take A Nap On Date Night With Girlfriend Kathryne Padgett At Mavs-Suns Game 7?

Neither the tambourin, nor the public affection from Padgett were solely responsible for keeping Rodriguez awake and afloat while in Italy. Per Padgett, who competes in fitness competitions and also works in nutrition, the couple also enjoyed a late night cruise and some wine.

Being that his career MLB earnings were just shy of $400 million, one would assume A-Rod was footing the bill. Regardless, it’s easy to see why he’d opt to indulge in such a seemingly pricey and public get away.