As the countdown began on the video board to start the SEC Championship, you could feel the emotions, as both fan bases rose to their feet in anticipation of the opening kickoff. We’ve been waiting for this game for over a month, as both teams were on a collision course for Atlanta. After starting the game as underdogs, Alabama left the field as Champions, defeating Georgia, 41-24.

If you’ve paid attention to Georgia this season, the defense has been mostly unstoppable, ranking first in the country and racking up stats. Well tonight it was the opposing team breaking records and padding the stats, humbling the Dawgs in the process. Alabama quarterback Bryce Young had been preparing all week leading up to this game for a defense that could force him into mistakes or bring out turnovers from pressure. Turns out, Young was going to break SEC Championship records with his performance Saturday night. 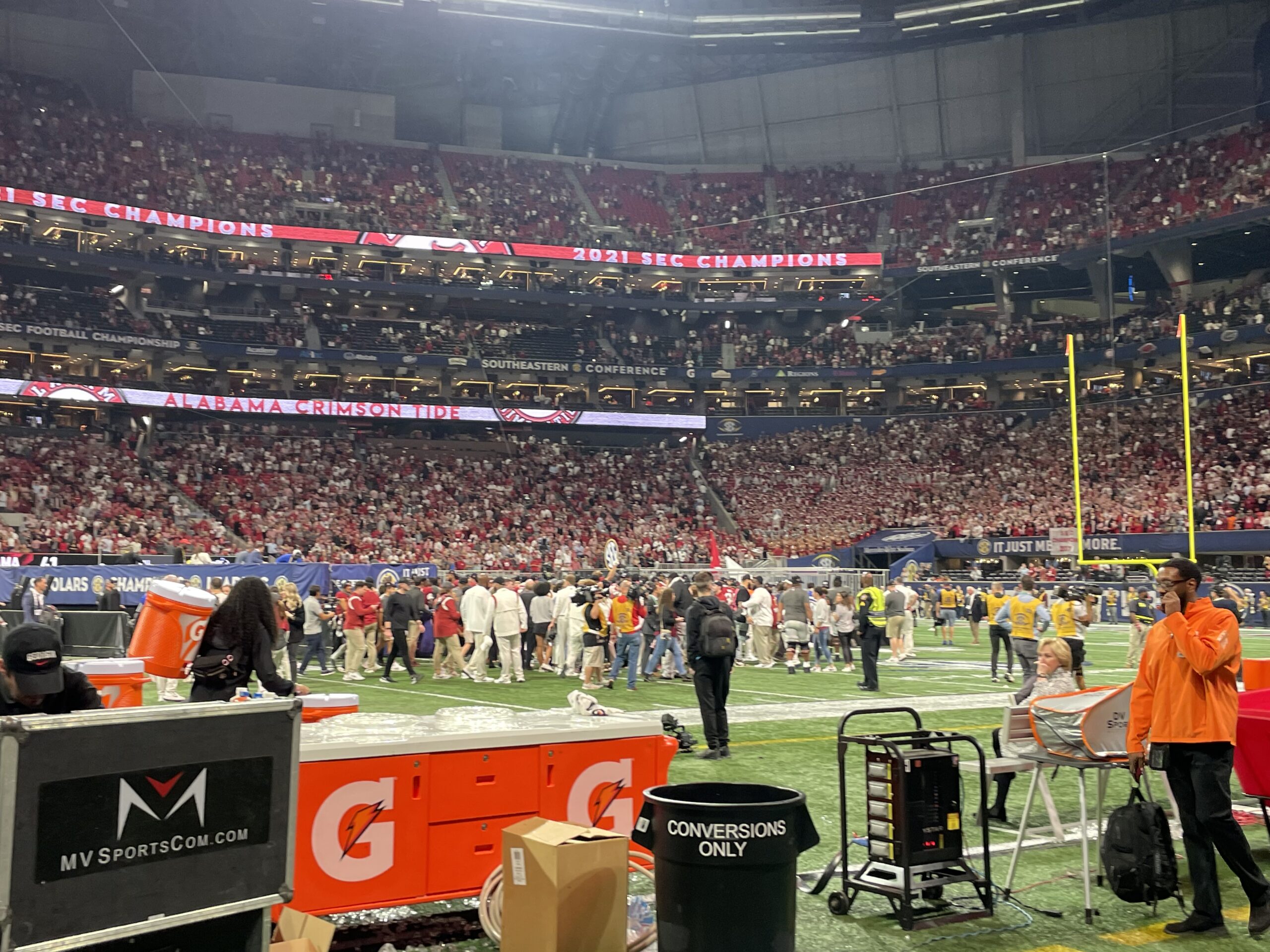 Coming into the title game, opposing quarterbacks against Georgia only averaged 150.8 yards per game, throwing five touchdowns and 12 interceptions. But, they hadn’t played Bryce Young yet, who decided to have one of his best career games. The Alabama quarterback threw for 421 yards, while rushing for another 40 yards and finishing the game with four touchdowns.

Young was named the game’s MVP after setting an SEC Championship Game record for passing yards, while his 461 total yards broke another record.

“Yeah, I think, again, that was a really good defense. It had really good players, great coaching. I think it was just about how we prepared. We kind of wanted all as an offense take that challenge.

“Like Coach is saying, you hear the rat poison, and it was kind of against us this week,” Young added. “We took preparation very seriously, and we all understood the magnitude of the moment, and we all stepped up. So it was everybody, all 11. It was the coaches doing a great job calling plays, managing situations.”

It was surprising to see Georgia give up all of those yards through the air, especially with a defense that is so highly touted, which they should’ve been, based on the previous 12 games. But when you look back on those games, it’s hard to point toward a team that had a quarterback like Bryce Young. We witnessed the Dawgs dominate Will Levis, K.J. Jefferson, Bo Nix and Hendon Hooker, but clearly Bryce is on a different level and most likely wrapped up the Heisman Trophy.

This was clearly a game that would be won through the air, not on the ground. But, there hasn’t been a game this season where Georgia has had to pass their way to a win, which came back to bite them against Alabama. Stetson Bennett found himself in a critical spot, not having the rushing attack that he’s been afforded over the past 12 games. His two interceptions were costly, especially the one returned for a touchdown. As Kirby Smart noted postgame, they didn’t spend much time in practice this week working on the run game.

“We actually went into this game all week. We didn’t work on run much because we didn’t feel like with the backs it was coming. It was going to be a pass game. Felt like we’d get a lot of empty, which we did.

“I really feel good about the things we worked on, but our ability to execute them — we had two or three third downs where we have a bust and cut a guy loose, and we haven’t done that all year,” Kirby added. “When you’re in man coverage and you cut a guy loose, that’s not typical of us.”

After leading 24-17 at halftime, Alabama came out swinging in the second half, as Bryce Young connected with Jameson Williams on a 55-yard touchdown. It was 31-17 and Georgia was up against the ropes, in a bad way. We’ve watched this team all season, but they’ve never had to respond to a two touchdown hole. Kirby Smart can talk about how his defense had stopped them two or three times in a row, but the only time they responded was on the 75-yard drive in the 4th quarter, making it 38-24. The pick-six thrown by Stetson in the 4th was the finale to an underwhelming performance by Georgia.

Georgia could never really get into a flow against Alabama, probably because they’ve never been in a shootout or had to climb their way out of a huge hole. We’ve seen this team look like Superman throughout the regular season, but it feels as if we witnessed Alabama stick the kryptonite right into the back of Georgia’s defenders, as they were chasing down a receiver.

After the game, Kirby Smart was asked what adjustments they would have to make if they played Alabama again this season, which could happen.

“The first answer would be don’t leave people uncovered, you know what I mean? Like that’s the first objective. Let’s cover them, and then try to win some one-on-ones and get balls down.

“Because look now, they’re going to throw and complete balls,” Smart added. “They’re really good at doing that. At the end of the day, you have to put a body on a body and cover them. Some of the plays we gave were gifts.”

I hate to break it to Kirby, but those plays that were given up weren’t gifts. Alabama was prepared for a shootout and Georgia wasn’t, it’s pretty simple. When you have receivers like Nick Saban does, he’s going to make you pay, especially when you haven’t been tested in that department for most of the season. On the other side of the ball, Saban talked about making Bennett uncomfortable and pressuring him into making throws on the run, which benefited the Tide.

“So I think us changing the picture on him a little bit helped. We have to play the ball better in the deep part of the field. We’ve had a couple of those the last couple of weeks that are things that we need to do better, but all in all, I think that was probably the one thing that helped it the most.

“Pass rush always helps you. If you get good pass rush. We affected him in the pocket,” Saban added. “He scrambled some, which is — you hate, but you’re also affecting a guy when you do that because you’re not throwing the ball on time.”

Alabama came into this game with a very big chip on its shoulder, the rat poison that Nick Saban loves to reference, was very prevalent this week. It was all about the Georgia defense and how would Alabama sustain any kind of offensive rhythm. Well, Saban was quick to point out postgame how much he appreciated that type of talk all week, as all it did was motivate his football team to go get their respect.

“I think what these guys really wanted to gain was more respect. Not just the fact that they were underdogs because I think we had a tremendous amount of respect for Georgia, their team, and what they accomplished. But you guys gave us a lot of really positive rat poison. The rat poison that you usually give us is usually fatal, but the rat poison that you put out there this week was yummy.”

The Tide got their respect, while Georgia is wondering how it all went wrong in the big game, again. I guess it goes back to the famous quote, “the more things change, the more they stay the same,” and Alabama made that clear on Saturday night.