Talkers.com released data from the month of May for the 15 most listened to talk radio shows: 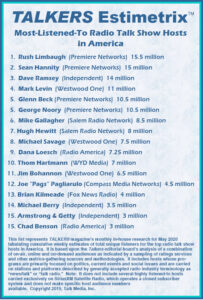 Terrestrial radio is often forgotten about in the conversation as it doesn’t play as well on social media. But, as you see, it remains a dominant medium.

Rush Limbaugh has long been at the top of this list. Limbaugh’s conservative talk program has been nationally syndicated since 1988 and has over 600 affiliates. This type of run is an anomaly. Few have ever stayed on top of their field for as long as Limbaugh. His stretch on radio will likely never be topped

Sean Hannity, whose show airs after Limbaugh’s from 3-6, hosts the second most consumed radio show and his television show, which routinely draws 4 million viewers, is often the most-viewed on cable news. Between the two, Hannity is arguably the most influential talent in all of media.

It’s been a while since I’ve heard Dave Ramsey’s name. And it couldn’t matter less as he comes in third with 14 million.

I’d guess a sports show would soon emerge down the list between 16 and 25. Sports radio has been impacted more by podcasts than political and business radio. While political podcasts are more listened to than sports — Ben Shapiro Show, Pod Save America — there are fewer options compared to the clustered sports market. With that said, you can conclude there is an opening for political podcasts, particularly with conservative hosts (look above).