There are still three weeks left of 2021, yet 12 major U.S. cities have already broken annual homicide records. According to ABC News, five of the cities have homicide totals that top records set or tied last year. 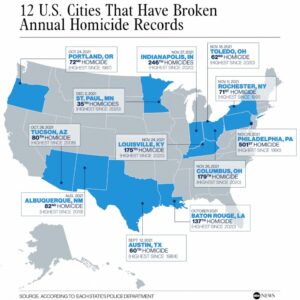 All across the country, people are being murdered at record rates. There is not a single problem more striking than that.

So why is it happening? You guessed it: the reasons are political.

There are not enough police officers to protect major cities. First, the retirement rate in police departments nationwide jumped 45% over 2020 and 2021. Then, another 18% of officers resigned. According to the Police Executive Research Forum, these declines followed social justice protests and calls to defund law enforcement agencies after George Floyd’s death.

Keep in mind, most of the cities struggling with homicide increases have elected mayors who have framed police as the true threat to humanity.

Chicago, run by a grotesque human called Lori Lightfoot, leads the nation with 739 homicides. The only reason Chicago didn’t make the chart is because the city recorded 974 homicides in 1970.

In Oakland, California, Chief LeRonne Armstrong said its city is down around 70 officers from the past year.

“To have 70, nearly 70 less officers a year later,” Armstrong said, “is definitely going to have an impact on our ability to address public safety.”

I argued last summer that police are now understandably more hesitant to do their jobs, knowing that the New York Times has anti-cop narratives already written and ready to publish, should things go awry.

Moreover, cities across America are letting lawbreakers arrested for gun possessions walk away unscathed only to commit worse crimes.

“Nobody’s getting arrested anymore,” Robert Boyce, retired chief of detectives for the New York Police, said. “People are getting picked up for gun possession and they’re just let out over and over again.”

Though murders and crimes increase, arrests continue to decline. New data from the FBI show that the number of arrests nationwide fell 24% in 2020, the lowest in 25 years. FBI crime data is not yet available for 2021, but estimates aren’t promising: 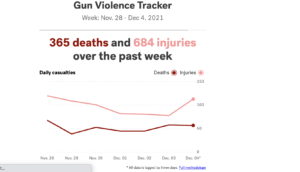 These data points read like a horror film. In the country’s most populous areas, police are quitting, people are dying, criminals are walking free, and politicians are mostly to blame for it all. Essentially, major cities across America are not safe anymore.