Over the summer, I tracked the growing views of podcasts and radio shows that aired on YouTube. In the era of cord-cutting and smart TVs, it was evident that viewers were no longer just watching quick YouTube clips on mobile devices. They were also consuming YouTube videos on their large, HD TVs like a channel in their cable package.

The growth is even larger than expected. Wednesday, YouTube said that since December 2020, 120 million people have watched YouTube on their TV screens. This makes an active YouTube presence, whether through full episodes or various show clips, a must for all media shows and personalities.

Though there are listeners who prefer the mere voice of a podcast or radio host with no visual component, trends show that the video versions are of increasing interest. Here are some numbers from July: 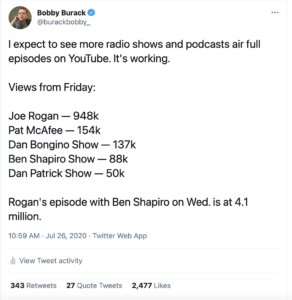 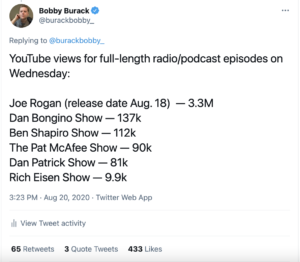 Rogan and Patrick have since moved their full airings exclusively to Spotify and Peacock, respectively, but continue to distribute clips on their YouTube pages as well.

YouTube’s impact on the TV side is undeniable and is now a factor in talent contract negotiations. As much as networks would love to keep viewers watching linear TV, there’s a growing number of viewers who consume top personalities only via online clips, primarily through YouTube. That’s the reason the vast majority of opening monologues from Tucker Carlson, Colin Cowherd, Stephen A. Smith, and Chris Cuomo appear for free on YouTube. All four of these personalities have large reaches with viewers who never watch TV.

A cable or OTT subscription is not needed for access to most top personalities.

In response to last week’s uproar regarding Skip Bayless’ salary, I discussed why Fox Sports would make him such an offer. The answer is clear: FS1 has calculated that Bayless helped establish a lucrative YouTube channel with nearly 2 million subscribers.

Industry experts have spent years trying to pinpoint what will replace linear TV habits. This answer isn’t so clear: it’s a combination of OTTs, podcasts, Twitter, Facebook, and of course YouTube clips on TV screens. And for media circles, that last one may be the most important.