Took a quick trip to go look at water

The wife and I piled the kids into the grocery-getter and took off Friday after work for a quick two-night trip up to Niagara Falls to do what people do on the U.S. side — look at water and not much else. I hadn’t been to the Falls since I was 12, and my wife hadn’t been since she was in her teens so it was a good trip to see if things had changed from back in the day. Not much has.

The New York state park system does a great job with the gardens, the Maid of the Mist operation, Cave of the Winds, etc. There’s a trolley that takes you to Goat Island where you can look at the water, go on a walk, look at flowers and look at more water.

As for the city, it’s still a dump with very few restaurant options. I’m told the city has actually been cleaned up in the tourist area, but it’s hard to tell.

• Do people have any idea how to use a trash can?

• Why do so many Indians (from India) love the falls?

• If there’s a Delta variant spin-off, it’s going to be born out of the people visiting the falls.

• Are you a people-watching person? You’re going to have fun here. It’s right up there with amusement parks.

• I’m pretty sure my 4-year-old was having an out-of-body experience while riding straight into the Canadian falls while standing at the front of the Maid of the Mist.

• I’ve never stayed in a bigger dump of a Hyatt property. Not good for a hotel that’s been open for like 3-4 years. I’m talking a broken window near the elevators on the 5th floor that was repaired with clear tape.

• And what’s up with making people wear gloves while getting food at the breakfast bar? You should’ve seen the people running their hands through the box of gloves before putting on the gloves. It was a comedy bit. 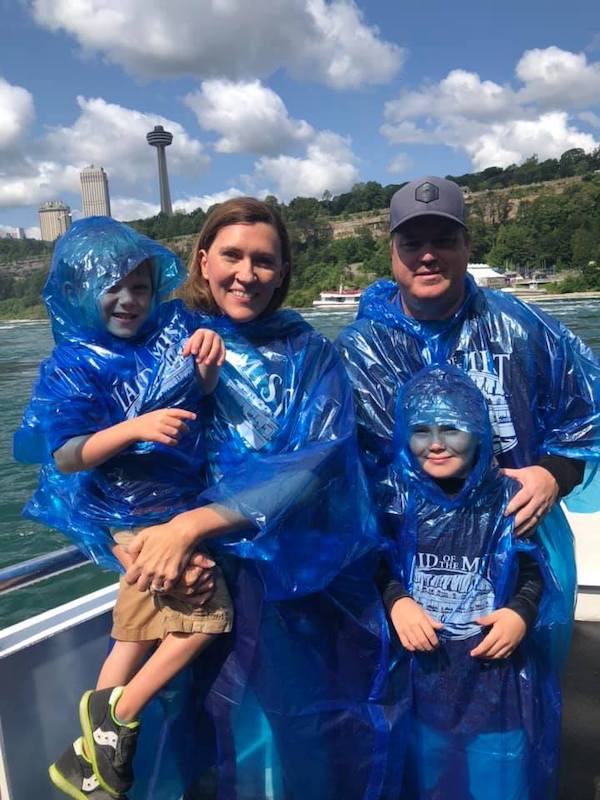 • I never swatted at more bees and flies while eating than in Niagara, even in restaurants.

• I’m fairly certain the ‘Made in America’ store has a few things that were actually made in China. Whatever. I won’t lose sleep over their marketing scheme.

• The Canadian side looks like a good time if they’d ever open up.

• Hey foreigners, stop hogging the observation deck railing during the nightly LED show. You know that whole thing where Americans are just the worst and they’re horrible travelers when visiting foreign countries. LOLOLOL. Go to Niagara Falls and get back to me.

• 3-4 total hours of dicking around at the falls was plenty for the kids. They were ready to swim.

We finished off the trip with a visit to a friend in Williamsville, NY (suburban Buffalo) and it was nice to feel like we were back to civilization in restaurants without fly issues. However, one thing I wasn’t expecting to see out of a Buffalo restaurant was the introduction of market pricing on chicken wings. IN BUFFALO! I knew chicken wing prices were out of control, but we’re now talking pricing like we’re buying lobsters. This is insanity.

Conclusion: I’ll definitely be back to see a Bills game. I got an immediate Green Bay vibe from Buffalo. Yes, I understand that Ralph Wilson is out in the middle of a field and there’s not much to do besides tailgate and watch a game. Still, it’s not hard to feel and see the passion for their team. The biggest problem I see out of a Buffalo trip this season is that the home schedule isn’t the most exciting ever.

Thursday night, ready for the big game, I come out into the living room with my uniform on, new cap, and my old school suede Pumas.  Game time!  My 22-year-old daughter looks at me and in her best sassy voice says “WHAT… is…. THAT?”  I said it’s my TNML uniform for mowing.  After a few seconds of silence, as she processes what her dad is now a part of, she grabs her camera and has to take pics for her friends.  I proudly oblige.  However, she then asks a very good question.  How many people are in “The League”?  I said I have no idea, but it seems like a lot across this great country, and I would imagine internationally too.  So Commish, any stats on how big this movement is?  Can we base it on ticket (er, uh, uniform) sales, mentions on social media, followers, etc?  And what regions of the country are most represented?

As a side note, there are a LOT of us normal dads out here getting a laugh or two out of your work every day.  Mornings are walk the dog, check the fantasy team stats and read Screencaps for a chuckle.  Great way to start any day.  You never disappoint and we appreciate it.  My sons are getting a glimpse into their future when I share your columns.  Keep it up!

Commish response: I love this email from Paul. The bad news for his daughter is that the TNML is a tri-blend, not the cardboard cotton she was expecting her dad to throw on. I took care of you guys. I went to war and told the OutKick t-shirt marketing manager Maxx (yes with two Xs) that it was tri-blend or we weren’t doing shirts. I wanted to change dad wardrobes forever. I guarantee dads out there ask their wives for “whatever kind of cotton that OutKick shirt is” for Christmas.

Fun, quick story for you guys. A few years ago, I was at Radio Row for the Minneapolis Super Bowl doing interviews, and Saints Super Bowl champion receiver Lance Moore stopped by. I gave him a tri-blend shirt from my previous employer. Six months later, I get a message from Lance requesting another shirt. It turns out his wife took control of that shirt and used it as her pajamas shirt.

And I’m not sure about the countries represented. That’s a great question. I have to believe Canada is represented. I’ll ask Maxx if he’s seen shirt sales from foreign lands.

• NFL preseason football is back Thursday and it’s supposed to get blazing hot here starting Saturday. Have I ever told you guys how much I like August? Football, Michigan canoe trip in two weeks, festivals, massive Wiffleball tourney coming up. The juices are flowing again.

Former Cubs Kris Bryant, Anthony Rizzo and Javier Baez all homered in their debuts with their new teams.

They are the first trio in the modern era to each homer in their debut with a different team after playing on the same team earlier that season.

Saw his guy earlier. Made quite an entrance. pic.twitter.com/8Xw0JaTCRC

He’s worked so hard on his pitch for Amy. pic.twitter.com/yAsaEC3DFK

They went with the slaughter pic.twitter.com/zEkaoNSE6w

Fred Durst rolling in to Lollapalooza with Dad pants and a grey wig doing cheesy dances and absolutely crushing like he’s 2021’s cool Uncle from 1999 is going to be my energy from here on.

Lolla is awesome!! Even mayor Triple threat is having a good time. Next week, masks for everyone!! @MorningAnswer @DanProft pic.twitter.com/AXiXLKdmgb

@OutKickTNML Hey Commish. Although I have retired from mowing acreage, this was mandatory equipment on the old Ranch King. If your still driving a machine with a steering wheel this helps you drink during the turns. @JoeKinseyexp pic.twitter.com/zL2AgTMBGA

Born Nov. 8, 1970, your friend Tom Anderson is 18,530 days old today, matching Wilford Brimley's age on the day 'Cocoon' was released. Here's how it started and how it's going, from his own Instagram. Congrats @myspacetom! You've reached the Brimley/Cocoon Line. pic.twitter.com/6szTWkHJLx

On July 24, CBP officers in Louisville, with the help from officers at the National Targeting Center, Antiquities Unit, intercepted a shipment containing 13 pieces of ancient artifacts dated from Post-classic to the Aztec era, 1100 through 1532 AD.

US BORDER PATROL in PR: This morning, Ramey #USBP agents deployed to the southeastern region of PR detected a drug smuggling vessel inbound towards Yabucoa, PR and with assistance of LE partners discovered and seized over 750kgs of COCAINE!!!#RmyBPdetections @CBPCaribbean pic.twitter.com/HVnU3r3VFm

In a helicopter over the Strip, 1982. Small buildings on the lower left are the site of today's City Center. Photo by Don Ploke. pic.twitter.com/BENc7RPVMG