WWE Monday Night Raw is considering a shift from a TV-PG rating to TV-14.

On Thursday, Andrew Zarian of the Mat Men podcast reported that Raw would move to TV-14 this Monday, but later learned the company had halted those plans and is now considering the change for a later date.

Raw airing on USA Network was rated TV-14 from 1997 to 2008. WWE made the change to create a more family-friendly product.

That pivot proved controversial as wrestling was most popular during the Attitude Era when it pushed the boundaries of even TV-14. 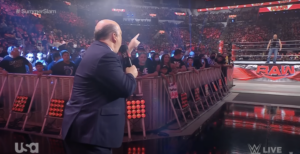 WWE may not make a final decision on the rating until it gets clarity on the future of WWE chairman and CEO Vince McMahon. Last Friday, the Wall Street Journal reported that McMahon agreed to pay more than $12 million in hush money to four women over the past 16 years to suppress sexual misconduct and infidelity allegations.

There is uncertainty about how the networks and WWE board will handle this report. If the board were to push McMahon out, the future of the company would be up in the air. (Note: WWE will be fine financially either way. The company is making more money than ever.)

If McMahon survives and Raw ultimately goes TV-14, the pivot away from the PG era would prove primarily symbolic. It would not spark a return to the Attitude Era.

To the chagrin of old-school wrestling fans, WWE is never going back to hardcore programming, Bra and Panties matches, and Steve Austin almost “shooting” Vince McMahon.

Look at this potential move as a promotional tool. In terms of excitement, Raw lags well behind AEW Dynamite and WWE SmackDown.

Raw lost wrestling supremacy in 2019 after SmackDown moved from cable to Fox. WWE had considered Raw its flagship program before this move. In the move, Raw lost Roman Reigns, the biggest active mainstream draw at the company.

So if anything, a move to TV-14 would give Raw a branding distinction from SmackDown, which would stay rated PG on Fox.