Chick-Fil-A can ruin people and even get them into legal trouble.

Thursday, Kimberly George Ragsdale, 47, of Dallas, was arrested for posing as an FBI agent to get free Chick-Fil-A. According to the Polk County Standard, Ragsdale attempted to get free food from the Chick-fil-A several times last week and threatened to arrest employees if they didn’t comply.

After employees called police, Ragsdale said she didn’t have her credentials on her, that they were electronic only.

Once officers placed her in handcuffs for impersonating a public officer – a felony – Ragsdale began to speak into her shirt like she was talking into a radio, saying that they were arresting her and to send backup

Quite the plan, I’d say.

“We are thankful for the observant and professional staff at CFA who knew what to do and gathered the info needed for us to make our case and catch her in the act,” Rockmart Police Chief Randy Turner said. “We would like to inform our citizens to call 911 if someone is claiming to be an officer if they aren’t in a marked car, or in a proper uniform, or if they don’t have the proper credentials.”

Turner said if other businesses believe Ragsdale has come in demanding free food as a federal agent to contact the police department.

“You will not hear a real officer demand a meal anywhere.”

It’s unclear if Ragsdale was seeking a spicy sandwich or regular. 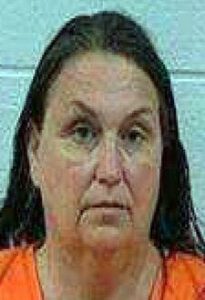