The Woke Hacks had quite a week.

— In March, ESPN anchor Elle Duncan interrupted an NCAA Women’s Tournament game to protest a Florida bill that protects third graders from talking about sex with their teachers. Yet Duncan had no comment about the NBA partnering with the UAE, where homosexuality is punishable by death.

In the meantime, the self-proclaimed gay rights advocate is Twitter fangirling with Joy Reid, who posted homophobic messages on her blog.

— Joy Behar has been on an incredible run of idiocy since the Roe leak.

“[The mob protest] shows Alito what it feels like to lose your freedom of choice. He cannot leave the house easily. Maybe that’s a good lesson for them,” Behar said.

Give her the ridicule that she so clearly deserves:

Ever since the Roe leak, Joy Behar has been on an incredible run of idiocy.

— Keith Olbermann is a sad loser. Even on Mother’s Day.

— WNBA player Liz Cambage has issues with “little white men.” And it seems that she’s not a fan of women of color either.

According to a former teammate, Cambage told Team Nigeria to go back to their “third world country” during a Vegas practice last year.

— Young Turks co-founder Cenk Uygur is upset that Joe Rogan called groomers “groomers.” Uygur is now begging transgender people to call his show and say whether they had sex with Rogan or not.

— Democrat Chicago Mayor Lori Lightfoot is encouraging members of the LGBTQ+ community to get armed and take to the streets because she believes the Supreme Court is going to attack them.

— And we close out with White House Press Secretary Jen Psaki, who is leaving the post today to take a job at MSNBC.

Name her best lie below. Truly a remarkable run while up on that podium. 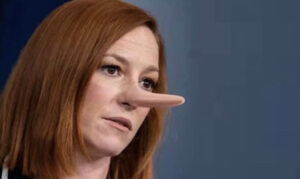 Did we miss anyone this week?