Matt Patricia was fired over the weekend, and Darrell Bevell became the interim head coach of the Detroit Lions. Bevell becomes the third interim NFL head coach this season, after Raheem Morris replaced Dan Quinn in Atlanta and Romeo Crennel replaced Bill O’Brien in Houston. To get a perspective on what being an interim head coach is like and what these coaches’ goals should be, OutKick reached out to Wade Phillips, who was a three-time interim head coach — with the Saints in 1985, the Falcons in 2003, and the Texans in 2013.

Ryan Glasspiegel: If Darrell Bevell, Raheem Morris, or Romeo Crennel called you for advice on how to approach the job, what would you say?

Wade Phillips: The good thing for them was I only had a few games left each time, so you really can’t change a whole lot with three games left in the season. These guys [especially Crennel and Morris] had quite a bit of games. You’ve got a chance to really change things.

They didn’t get training camp or anything like that to get what they want done. It’s often called “culture.” I call it attitude. You get the attitude of the team and the players going in the same direction. That’s the first thing, your message to the team: Hey, this is something new. The old season’s over. Let’s do what we can do in this amount of time and games.

Raheem and Romeo have had quite a bit of season left, which I think gives you a better chance of changing the direction of the team. If they fire a coach halfway through the season, you’ve got half the season left to do it. If it’s only three games left, you really try to get them to play as hard as they can play the last few games, because they’re not playing for anything. You’re playing more for pride.

When those guys took over, they had a chance to even make the playoffs. It’s a little different there, as far as what I’ve experienced, but you’ve just gotta give your message and your culture and how you want the attitude of the team to be and try to influence them that way. If there’s any changes you wanted to do as far as offense or defense or staff-wise, you’re able to do that — especially with a half a season or more left. If there was something you’d do as a new head coach, you could do it in those situations.

If you’re a defensive coach, you can get the offense to run the ball more — whatever your priorities or whatever you think can help the team win, you have more of an influence than you do with a few games left.

RG: Football is a relationship business. How do you handle the dynamic where you’ve been working under a head coach, he gets fired, and all of a sudden you’re in charge of the team?

WP: If you’ve been a head coach before, I think that helps a little bit because unless you’ve been one, you don’t know all the insides and outsides of what happens — or the problems that you have as a head coach, rather than being an assistant and just working for somebody.

But the good thing is, when you take over as a head coach, you can influence people in that now you have a platform where you talk to the whole team. Even if you’re a defensive coach — or an offensive coach — you get to talk to the whole team so they know what you want as an organization and team the rest of the way, rather than being on one side of the ball because that’s the way they’ve looked at you.

I always said to have a lot of meeting with the whole team and let them know about you. One side of the ball knows about you, and that side is probably happy you got moved up. The other side, they have to know who you are and what’s expected. The details of it — it’s not just, hey we want to do this. It’s how we want to do it and what it’s gonna take. That involves your philosophy, which might be different than the previous head coach’s, who got fired during the season, was.

I think you’ve gotta show a difference. You certainly don’t badmouth the guy who was there, because a lot of the players — they don’t make that decision, and they might not have [if it were up to them]. You don’t say, Hey this guy wasn’t no good, because there’s a lot of players that felt like they were there because of that guy.

You just have to bring the team together in a certain way. You do that with communication and details. They have to have the information on what kind of coach you are, what you want, and how you want it done.

RG: When you took over for Dan Reeves (in Atlanta) and Gary Kubiak (in Houston) during the season after working for them … They’re fired and you’re getting the job of the person who hired you. How do you preserve the relationship? Do you call them?

WP: Not necessarily. Dan Reeves is kind of a special guy. I first took over for him as a head coach after he was fired in Denver, after the 1992 season. Sometimes coaches, especially in those situations, resent that. People say, Hey you got backstabbed, and you hear all those things.

That’s why I have great respect for Dan Reeves, because I took his place after the season one year, and he hired me later on. We’re still really good friends, even though he got fired in Atlanta, and I took over for him again.

Sometimes they’re not happy with you when you take over for them.

But that’s also not what happened with Gary Kubiak. When you take over for someone late in a season, it’s not really a big deal, in my opinion. The ownership decided to go in a different direction, and they needed to hire somebody. Gary Kubiak also hired me again after I took over for him — when he got the Denver job. Obviously, that worked out pretty well — we won the Super Bowl.

But it can be a problem. It’s just human nature sometimes. Somebody takes your place, and you’re not happy with it. I haven’t experienced that because Dan Reeves and Gary Kubiak both hired me again, and obviously the other guy I took over for was my dad with the Saints in 1985 — and he didn’t get fired. He retired. He made the decision.

Again, if there’s only three games, I don’t really think you can change much. But if there’s 6-7-8 games, you can change a whole lot. You can totally change what you’re doing on offense or defense or special teams. The whole message can change, and if things are going bad early, that can change anyway, even if the head coach had stayed. The more games you have, the bigger the opportunity. 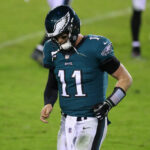