Over the past few weeks, the Los Angeles Angels have been on a tailspin, dropping their thirteenth consecutive game last night to the Red Sox, 6-5.

While they had an opportunity to tie the game in the 10th inning thanks to the automatic runner on second base, Jared Walsh and Max Stassi struck out and Kurt Suzuki grounded out harmlessly to short, putting the finishing touch on two weeks of futility.

The result mirrors the diverging fortunes of both teams since late-May; on May 24th the Angels were  27-17, one game behind the first place Astros, leading the race for the AL Wild Card, and outscoring their opponents by 53 runs on the season.

In the weeks since they’ve gone 0-13, been outscored by 44 runs and lost 8.5 games in the standings, leading to the firing of manager Joe Maddon.

In a rare move, Maddon criticized the front office for the decision, calling it a “bad evaluation”  and partially blamed analytics for his departure.

As the Angels have collapsed, the Red Sox have turned their year around.

On May 15th the Red Sox reached rock bottom, losing to Martin Perez and the Rangers 7-1 and dropping their record to 13-21. In the 3+ weeks since, they’ve statistically been one the best teams in the American League, winning 16 of 22 games and outscoring opponents by an average of 2.4 runs per game in the process.

The playoff odds from Fangraphs create a remarkable visual of their wildly diverging fortunes: 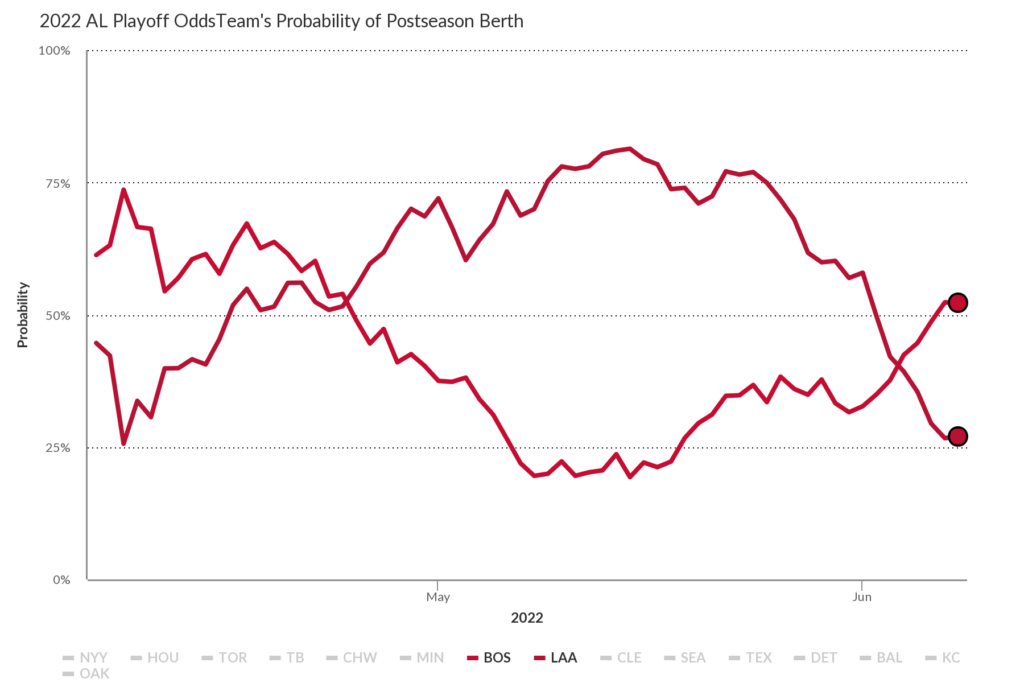 Just a few weeks ago, the Red Sox reached a season low 19.3% chance to reach the postseason, while the Angels had one of the highest probabilities in the American League at 81.4%.

Now it’s the Angels who appear on track to miss the postseason yet again, despite the talents of Mike Trout, Shohei Ohtani, Anthony Rendon and major offseason acquisition Noah Syndergaard.

On the flip side, the Red Sox might have salvaged their year.

Thanks to MLB’s addition of a third wild card spot, the Red Sox would be in the playoffs if the season ended today, and their postseason probability has crept back over 50%.

The baseball season is commonly (and rightly) referred to as a marathon and not a sprint, and the dramatic reversal of fortunes from these two teams shows how quickly things can change. The Angels could right the ship in a matter of weeks and pull themselves back into contention. But in such a short period of time, these two teams have set themselves up to head in completely different directions this October.

Ian Miller is a former award watching high school actor, ice cream expert and long suffering Dodgers fan. He spends most of his time golfing, eating as much pizza as humanly possible, reading about World War I history, and trying to get the remote back from his dog. Follow him on Twitter.