My old buddy O.J. Simpson is out with his annual fantasy football draft recap Twitter video and I lasted about five seconds into it before I was distracted by whatever that is clipped to his Titleist visor. First thing that popped into my head was golf cart garage door opener. I’ve watched pretty much everything Juice has pumped out on Twitter and have never seen anything clipped to the infamous Titleist visor until now.

Golf experts tell me it could be a GPS range finder that helps Orenthal, 73, with distance. I’ve told you guys about how I shoot in the 98 range, so I have no need to worry about exact distance to the flag. In fact, I usually ask my cartner — while I’m behind trees or in overgrown grass — what it’s showing on the Grint app. And then I duff one back into the fairway.

Perhaps Juice is getting into product reviews. That would be the only justification for an (alleged) double murderer to be worrying about some Siri knockoff telling him it’s 110 yards to the flag. Can’t Juice just walk it off from the red disk in the middle of the fairway?

That’s why I’m sticking with garage door opener. I figure he’s been forgetting (73 and has spent those years in the penal system) the opener and that led to someone suggesting he clip it to his trusty visor.

I can’t imagine wearing one of these during a five-hour round and it rambling on about being 155 out when I can look down at the white marker. I predict we’ll soon find out a golf GPS company sent one to Juice to review on Twitter. It’s not a horrible marketing idea when you consider he’s sitting on 930k followers who are glued to his every word in case he lets something criminal slip.

It’s nothing for the Pro Football Hall of Famer to rack up 400k views. So you throw him a GPS tracking device and see if he’ll wear it. Smart play if in fact that’s what happened here. 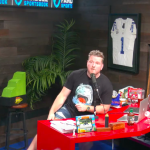