And then there were four. Four warriors. Four woke soldiers. Four souls who battled their hearts out for the right to be a champion inside his/her echo chamber. The Identity Politics Final Four of the Woke All-Star Challenge is set and it’s star-studded. It’s time to get it on! 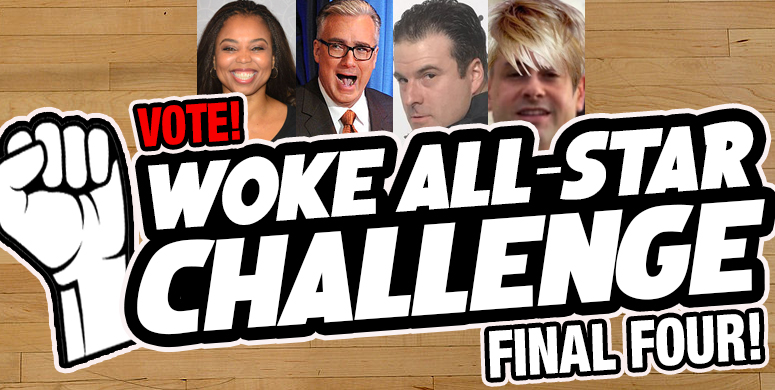 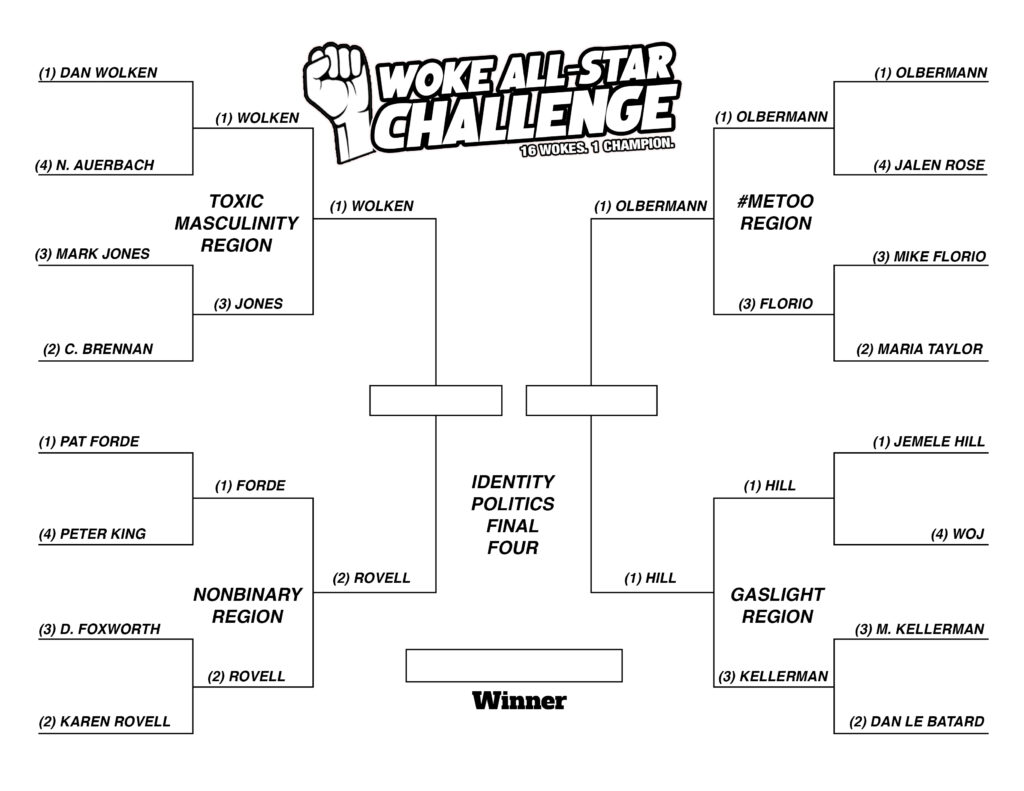 @BeatinTheBookie handicapper report: Rovell has the advantage in this matchup of woke nerds because he’s the hardest working snowflake in the game, while Wolken mainly stays in his feelings towards college sports. I expect Rovell to pull it out and stuff Wolken in a locker, similar to how he was stuffed in lockers during high school.

@BeatinTheBookie handicapper report: Listen, I know what you’re thinking: How is Crazy Keith a pick ’em against the woke queen? It’s simple. Recency bias and strength of schedule all go to Olbermann, who came out swinging with absolutely batshit tweets to Clay this week. Maybe he didn’t take his meds or maybe he was trying to impress OutKick readers for a boost in his woke rating. We will never know, but the one thing we do know is this will be a woke semifinal for the ages. Some would say it is the true final.

Each of our four woke semi-finalists brings an incredible array of talents with him/her to the Identity Politics Final Four. Dan Wolken specializes in mixing his love of COVID-19 and stupid college football takes into what has become an incredible force across the southeastern United States where fans have joined forces to see which fan base can hate Dan more.

His opponent, Karen Rovell, has figured out a way to work his love of COVID-19 into his general hatred of many different segments of society. Rovell actually increased his hatred brand during COVID-19 by being one of the virus’s biggest supporters, rooting hard for the virus to take out sports and everything else you value in society.

On the other side of the bracket, it’s bizarre lunacy from Keith Olbermann versus a woke street warrior in the form of Jemele Hill, who never lets a day go by without reminding her fellow street warriors who the queen is.

All four should be honored by just how hated they must be to get to this point in the All-Star Challenge. I was asked by OutKick readers to feature some of the greatest hits that these four have pumped out over the years. I didn’t waste too much time here. This should paint enough of a picture. You know the track records of all four. Let’s do this.

Who ya got in @outkick’s woke Final Four: Dan Woken or Darren Rovell?

The same coronabros in sports media who said the college football season was impossible are asking whether the season was worth it now that it has been safely completed. It’s amazing. pic.twitter.com/Tas8gNHEOk

Woke up this morning thinking about how after Abraham Lincoln emancipated the slaves, he paid slaveowners reparations. Not the enslaved. That was his way of helping to ✌🏾unify ✌🏾the country and pacify angry white folks.

Anyway, what’chall having for breakfast?

Been reading Isabel Wilkerson’s new book, “Caste,” and if you were of the opinion that the United States wasn’t nearly as bad as Nazi Germany, how wrong you are. Can’t encourage you enough to read this masterpiece.

Why are we wasting vaccinations on Texas if Texas has decided to join the side of the virus? https://t.co/Yn2i7zT8KL

National laughingstock below still thinks it’s either/or on Covid-19, life or death – meaning he either deliberately ignores the lung and heart damage or it’s too complicated for him to understand.

Also, you’re not young. You’re in the middle of the 5th worst age cohort. https://t.co/jtEjQKJ574

Many SEC fans wanted their states and their economy open and their right to not wear a mask. How’s your football season looking, guys? pic.twitter.com/DKmGf2AQQ4

An Indiana offensive lineman whose last tweet is that he wouldn’t live in fear of Covid-19 and his mother who now prays he doesn’t have permanent heart damage… pic.twitter.com/OwpvVurKpd