Bryson DeChambeau, who won two weeks ago, is doing that thing he does where he overpowers a golf course off the tee.

During the first round of the Memorial Tournament, DeChambeau logged two drives over 400 yards.

The first came on the 473-yard par-4 17th hole where his drive went a whopping 407 yards. He followed it up with a two-putt par.

Are we serious with this? pic.twitter.com/8T9pwiI9mu

Bryson DeChambeau hit a drive that traveled 345 yards in the air and 423(!) overall.

It went so far, he had to ask somebody where the ball was. pic.twitter.com/PH9Tgier1n

Houston, we have a problem!

It may be time to roll back the golf ball. Maybe Bryson should be required to go completely dimpleless.

DeChambeau was even and tied for 18th, four back of leader Mark Hubbard, at the time this was written. 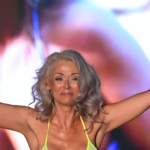