The national press is made up of the worst type of Americans: untrustworthy, thin-skinned, and mediocre. And the worst publication of them all, The Washington Post, keeps getting worse.

Tuesday, some unwitty, mindless hack employed by Jeff Bezos opted to take a shot at Marty Schottenheimer in his — wait for it — obituary.

The outlet deemed America’s second-most prestigious newspaper (behind The New York Times, which is also terrible) issued the following headline for Schottenheimer’s obituary:

This is absolutely disgusting and horrifying @washingtonpost https://t.co/3kg7WPnCu6

The Post quickly tweaked the headline, but the damage to what’s left of its reputation was already done. 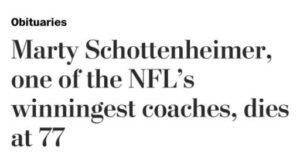 It must have really hurt them to make that change.

It might be time for The Washington Post to leave sports coverage behind. Last week, the paper argued that the Tampa Bay Buccaneers embody Tampa’s love of pirates, which is a major problem. A week before that, the outlet wrote an incredibly disingenuous, misleading puff piece about an ESPN personality that seemed as if the personality had ghostwritten the PR piece himself. The new week is here, and The Washington Post is still unbearable.

Rest in peace, Marty Schottenheimer, and as always, if you are looking for news, don’t go to a “news” outlet.