If Bryan Cranston can publicize spoilers for Better Call Saul, we can too.

Cranston said before the start of the sixth and final season of BCS that he and Aaron Paul would reprise their roles as Walter White and Jesse Pinkman for a total of three scenes.

Through 10 episodes, there’s been no sign of Walter or Jesse. But it’s nearly certain the duo will appear on Monday.

All credit goes to producer @futurejenn Carroll for picking the title of the next #BetterCallSaul episode. She emailed me the 611 title "Breaking Bad" and I thought, "Perfect."

Fans will remember Breaking Bad, as in the series, introduced them to Saul Goodman in an episode titled “Better Call Saul,” the eventual name of the sequel.

There’s been no hint as to what role Walter and Jesse will play. Strangely, there isn’t a pressing issue the show must resolve at this point. The chief suspense is how the relationship between Jimmy/Saul/Gene and Kim concludes.

BCS jumped to the BB timeline at the end of episode nine, only to trick fans last week into its first post-BB episode, “Nippy.” 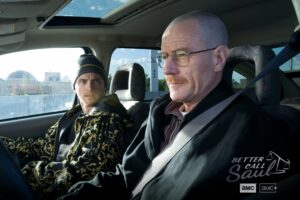 The show seemingly wrapped up the prequel timeline in 609 and will now jump back and forth between the events during and after the original series.

Cranston specifies that he and Paul appear once together and once separate, hence three scenes. Preferably, BCS will show the time Saul spent with Walter in Ed The Disappearer’s basement while the devious vacuum salesman prepared new identities for the characters.

Depending on when in the BB timeline Jesse and Walter appear, the show could revisit Gus and Mike, two central characters in both series.

Better Call Saul hasn’t garnered the cultural attention that its predecessor did. The synopsis doesn’t quite compare to a cancer-stricken chemistry teacher turning meth kingpin. But the prequel is still phenomenal — arguably the best show since Breaking Bad.

On a less positive note: Monday’s episode, assuming it’s the one, is likely the last appearance Walter and Jesse will make in the BB universe. Ever. This is it.