Vince McMahon is the CEO of WWE. He’s 76 years old. And he plans to fight someone in April.

According to Dave Meltzer, McMahon vs. Pat McAfee is listed on the internal schedule for WrestleMania 38.

McMahon will appear on Pat McAfee’s YouTube show this Thursday, presumably to plant the seeds for the match.

McAfee, a former NFL punter, is now the lead color analyst on WWE SmackDown. McAfee has the age advantage at 34, while McMahon is the specimen: 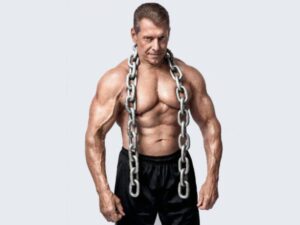 If the wrestling reporters are legit, McMahon’s return to the ring will coincide with the return of his greatest rival, Stone Cold Steve Austin. Meltzer also says Austin, 57, will return to the ring for the first time in 19 years to face Kevin Owens at Mania.

Here’s hoping both McMahon and Austin win their matches, and then Roman Reigns eventually smashes both of them by next year’s WrestleMania.