Jonathan Isaac, a forward on the Orlando Magic, stood for the national anthem and did not wear a Black Lives Matter t-shirt for today’s game against the Brooklyn Nets. He was the first NBA player in the bubble to do so. After the game, he was asked about that and answered:

Jonathan Isaac became the first #NBA player inside the bubble to stand during the national anthem. He also chose not to wear a #BlackLivesMatter shirt

After the game the first question he fielded was "Do you believe Black Lives Matter?"

“Absolutely [I believe] that Black lives matter,” Isaac said. “A lot went into my decision and part of it is my thought that kneeling or wearing a black lives matter t-shirt don’t go hand in hand with supporting black lives.”

“My life has been supported by the gospel of Jesus Christ,” Isaac continued. “Everyone is made in the image of God and we all share in His glory. Each and everyone of us each and every day do things we shouldn’t do. We say things we shouldn’t say. We hate and dislike people that we shouldn’t hate and dislike. And sometimes it gets to the point where we point fingers about whose evil is worse, and sometimes it comes down to simply whose evil is most visible. I felt like I wanted just take a stand on — I felt like we all make mistakes but I think the gospel of Jesus Christ is that there’s grace for us. And that Jesus came and died for our sins. And that we all will come to an understanding of that and that God wants to have a relationship with us.”

Isaac concluded that he believes the gospel is what will get us past not just racism but the rest that plagues us as a society.

Tim Reynolds of the AP further elaborated on Isaac:

Jonathan Isaac is an ordained minister, someone who gave money to make sure kids got fed when COVID closed schools, led a drive to support Hurricane Dorian victims and donates to Central Florida literacy programs.

And as he stood during the anthem today, he prayed.

Earlier this week, Steelers defensive end Stephon Tuitt explained why he’d stand for the national anthem. Prior to that Giants relief pitcher Sam Coonrod had a similar rationale to Jonathan Isaac — that he did not believe kneeling was in line with his Christian faith. 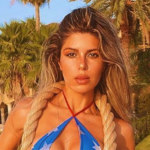