A couple of young Charlotte Hornets fans (believe it or not, they actually exist) waited outside a Charlotte-area condo on Wednesday hoping for a glimpse of LaMelo Ball. Though Ball didn’t bounce their way, the boys did manage to see a GOAT – Michael Jordan.

His Airness was headed for his car when the boys recognized MJ, screaming in disbelief as Jordan tried to temper their noisy excitement.

See it unfold in the video below.

They were looking for LaMelo Ball and ran into MJ instead

What makes the video great is the fact that one of the young boys waiting for a glimpse of Ball is wearing a pair of black and red Jordan’s when MJ appears. Hearing him quickly dissect the situation is awesome. “That’s not LaMelo…Oh, that’s Michael Jordan,” screamed the shocked fan.

Like Jordan so typically did throughout his career, he quickly took control of the situation, instructing the fans to “put that phone down.” They briefly obliged, coinciding with a brief view of the pavement, before panning again towards Jordan, asking where LaMelo’s at and again screaming “Michael Jordan!”

The 25 second clip also provides an awesome look into the garage housing a handful of pricey cars including an Escalade and what appears to be two Rolls-Royce Phantoms. 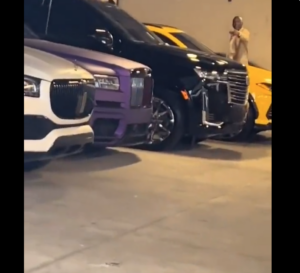 No doubt, these boys now have an unforgetaBULL story to share.