You know that very moment when you’re at the pool with your friends, minding your own business, when out of the deep end emerges a piece of man meat seemingly hand-crafted by God himself? You lean over to your friend and say, “Mmm, break me off a piece of THAT” (and yes, that is a direct quote).

You sit up on your lounge chair and quickly assume your most fool-proof, flattering bathing suit pose, even if it means crushing your lower three ribs and dislocating your right shoulder. You hold your breath and smile maniacally as this fine specimen of a man slowly makes his way towards you; you’ve obviously done this a time or two before and you’ve got it down to a science. He passes by and you nonchalantly continue your gaze after him, only to have your retinas brutally assaulted by this: 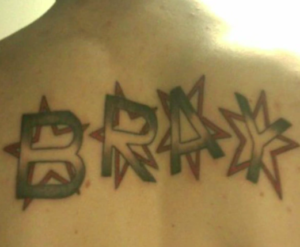 Or what about the moment when you and your latest victim get back to your place on a Saturday night, and you inevitably start making out. Things start getting heated, so you pull back and look at him and say, “This calls for a slow jam” (again, direct quote), and you go over to your iPod dock to put R. Kelly’s “Bump N’ Grind” on repeat. But when you turn back around, your dude has already stripped off his T-shirt and now you’ll forever have this insufferable image burned into your brain: 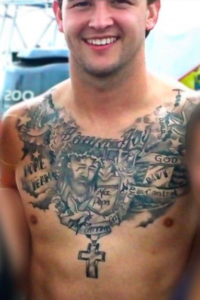 Now I will preface this next statement by admitting that football is a few hundred light-years outside my realm of expertise: I don’t really know much about the sport, but aren’t quarterbacks the leaders of our teams, responsible for calling plays and making like, really important decisions? (Please feel free to correct me if I’m wrong about this. After all, I was the girl who, for the first nine months I lived in Nashville, thought that the “UT” football games everyone was obsessing over stood for the “University of Texas.” I couldn’t quite figure out why everyone here cared so much about a Big 12 Texas school, but as a native Texan I was extremely flattered and made sure to wear burnt orange around town as much as humanly possible.)

This tattoo calamity is disconcerting to me on many levels. Mainly because when I see body art like this, the first few things that pop into my mind are images of Ed Hardy T-shirts, dangerous amounts of hair gel and “Jager Bombs” listed under one’s interests on Facebook. It takes me back to that time at the gym when I spotted a genuine, authentic “tramp stamp” on the small of some guy’s back when he bent over, and a little piece of me instantly died inside. That’s the effect these images had on me too, yet infinitely worse: That guy’s biggest decision that day was probably choosing which Affliction V-neck would properly showcase his shaved chest and complement his spray tan best; Bray and McCarron’s decision-making duties bear a bit more weight. Why are we trusting these men to carry an entire football team when we can’t even trust them not to inscribe eternal eyesores onto their bodies? How can we trust the decision-making processes of grown men who at some point in their lives thought to themselves, “I have absolutely no reservations about permanently engraving this into my flesh today.” More alarmingly, they might have even thought, “In fact, I think this is a great idea.”

As a general rule of thumb, paying someone to help you closer resemble a watered-down Jon Gosselin is never a great idea.

Just as Kesha and Crocs have both caused my faith in humanity to falter at times, so have these tattoos. In their defense, has anyone bothered to tell Bray that those stars are there forever? Has anyone taken the time to thoroughly explain to McCarron that that horrendous cursive lettering doesn’t just wash off in the shower? It’s an honest question, because I really don’t think anyone bothered to tell this to my cousin Billy, whom everyone referred to as “The Body” (and by “everyone” I mean “he, and he alone”), so naturally he decided to get that humble moniker tattooed onto his arm. However, his buddy ended up misspelling the word “Body” (damn those tricky consonants!) and Billy is now proudly sporting a very large “Bob” on his right shoulder until he can save up enough money to cover his entire arm in flames—the only logical remedy for such a mishap.

I don’t know, maybe I’m overreacting here. Ladies, is this a huge turn-on for you?

It’s not for me personally, simply because, upon introducing either of these gents to my father, I’d be immediately disowned, and hostile estrangement just doesn’t really put me in the mood like it used to.

Ultimately, I hope everyone has calmly and quietly come to terms with the fact that these tattoos are very real and very much here to stay. As for me, I want to go back to simpler times, to happier times, when I thought the only thing on McCarron’s chest was a set of pecs that would rival Dwayne “The Rock” Johnson’s.

My Final Verdict: Even though Bray’s back tat is positively atrocious, I’d still label it the lesser of two very nefarious evils, simply because as long as he was facing me I could live in blissful naivety of its existence.