“I created TRUTH Social and TMTG to stand up to the tyranny of Big Tech,” Trump said in a press release. “We live in a world where the Taliban has a huge presence on Twitter, yet your favorite American President has been silenced. This is unacceptable. I am excited to send out my first TRUTH on TRUTH Social very soon.

Truth Social, what a name, will launch in the first quarter of 2022. The service’s iOS app is now available for pre-order on Apple’s App Store.

Here’s a look the platform: 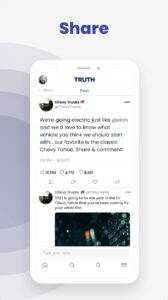 There’s a market demand for an alternative to established Big Tech platforms. Parler’s rise late last year proved as much. It wasn’t until Amazon Web Services abruptly crashed Parler in response to the events of Jan. 6 that Parler’s growth halted. Other alternative platforms, such as Rumble and SubStack, have grown in influence.

Rumble won’t catch YouTube in size. Rumble’s creators know that. Still, Rumble can succeed. And because of exclusive deals with Glenn Greenwald and Tulsi Gabbard, it will. Similarly, Truth only needs to claw away some of Twitter’s users to have an impact.

Moreover, the media will pay attention and promote Truth Social for free. CNN, MSNBC, the New York Times, and the rest of the crew are aching for Trump. The TV networks miss him dearly. Blue-chip outlets will scrutinize every “TRUTH” — equivalent to a tweet — Trump posts. As long as Truth Social installs an embed feature, NPR will again ingrain Trump’s posts into its articles.

With Trump as the service’s face, Truth can attract other influential conservative voices.

Stunningly, the press hates Truth Social. In other words, they will begin monitoring it obsessively at the start of beta testing next month.