On Thursday, Trump reposted a video on his Truth Social account of Megyn Kelly telling BlazeTV host Dave Rubin that DeSantis could not defeat Trump in a 2024 primary.

“The only way DeSantis is going to become the Republican nominee is if Trump chooses not to run and endorses him or dies,” Kelly said. “The only winning move [for DeSantis] is not to play.”

Trump endorsed Kelly’s analysis with a simple message: “I AGREE!” 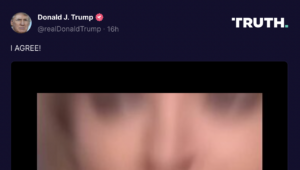 You can watch the full segment below:

Trump’s shot at DeSantis comes on the heels of a report that Trump snubbed DeSantis ahead of an upcoming rally in Florida. Trump’s announcement specifies the rally is only in support of Sen. Marco Rubio.

An adviser to Trump confirmed to various outlets that DeSantis would not attend the rally.

DeSantis and Trump were more political acquaintances than friends. However, a battle between the two has seemed inevitable since DeSantis’ emergence as a party favorite for his handling of Covid-19 and his battles on key social issues, including a ban on sexual indoctrination of young children in Florida — a law his critics inaccurately dubbed “Don’t Say Gay.”

Odds for the 2024 presidential election have consistently ranked DeSantis just below Trump, often ahead of President Biden.

The odds are currently as follows:

Record-high inflation, raging crime, surging gas prices, and an open border have propelled two potential candidates to better odds than the sitting U.S. President. A hypothetical primary between Trump and DeSantis could be a determination of who topples Biden in 2024.

For the record, neither Trump nor DeSantis has announced intentions to run in 2024.

That said, Trump continues to suggest he plans to by telling interviewers that voters will be “very happy” with his decision. In July, he told the New York magazine he had made up his mind, and the only remaining question is whether he’ll announce it before or after the November midterms.

“I feel very confident that, if I decide to run, I’ll win,” Trump added.

Meanwhile, DeSantis refused to answer whether he would run in 2024 during a debate with Democratic Florida gubernatorial candidate Charlie Crist this week.

Trump is the 2024 favorite. A path to victory would require DeSantis to deter some percentage of Trump’s passionate base away from the former president.

Megyn Kelly made the point that there are GOP voters who would appreciate it if DeSantis would wait, and run for president at a later date when Trump is no longer eligible or an option.

“They like DeSantis, but they don’t think it’s his turn,” she said. “They think Trump was screwed out of his last election, that he was screwed out of his first term by all the craziness and the Russia gate and so on. And they think he is entitled, he deserves another shot at it. Like the hardcore Trump faithful is unshakeable.”

Challenging Trump has proven insurmountable for various Republican candidates. But DeSantis has separated from his party’s pack as a potential presidential candidate.