Donald Trump is back online — sort of.

Tuesday, months after both Twitter and Facebook kicked the then-President off, Trump launched a new platform to communicate directly with his followers.

The platform, called “From the Desk of Donald J. Trump,” appears now at www.DonaldJTrump.com/desk. 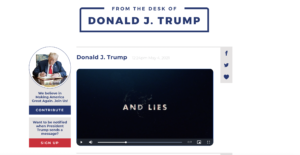 Thoughts on the name?

According to a report by Fox’s Brooke Singman, followers can expect Trump to post comments, images, and videos at various times. The report notes that the platform’s technology is powered by Campaign Nuclear, which was created by Trump’s former campaign manager, Brad Parscale.

Trump’s senior advisor Jason Miller says this is not the social media platform that Trump has been rumored to be moving forward with.

“President Trump’s website is a great resource to find his latest statements and highlights from his first term in office, but this is not a new social media platform,” Jason Miller said. “We’ll have additional information coming on that front in the very near future.”

The key takeaway from Miller’s comment: the woke are mad with today’s news, and they will soon be mad again.

Trump is never allowed back on Twitter, he’s gone forever. Facebook, meanwhile, isn’t quite sure whether it will let Trump back on. Facebook’s Oversight Board is expected to announce its ruling Wednesday on whether it will indefinitely suspend Trump from Facebook and Instagram.

The suspense, it’s killing me.