Each week, Outkick updates you on the latest polls for the 2020 presidential election between Donald Trump and Joe Biden. 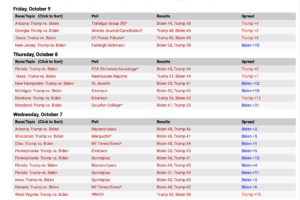 President Donald Trump entered last week’s debate with ground to make up in the polls. A week later, most of them show Joe Biden’s lead growing.

On the map, NPR projects a 290-163 victory for Biden — with wins in Arizona, Michigan, Wisconsin, and Pennsylvania. Despite the polls, I’d be surprised if Biden won all four. That said, an Arizona win — which is plausible — greatly complicates Trump’s re-election chances.

NPR has Florida marked as a toss-up. A recent ABC News/The Washington Post poll gave Trump a 51%-47% advantage in the state. Even if the debate didn’t help Trump, I’m not convinced it brought him down. With under a month to go, Trump should be favored in Florida.

With a deficit, Trump cannot afford to skip next week’s virtual debate, as he’s claiming he will. (And he’s right, a debate over Zoom or some other software is bogus.) Center stage is still Trump’s best route to convincing America that Biden is not fit for office. Of course, that’d require Trump not interrupting and letting Biden hurt himself.