Texan Nick Billardello, whose Twitter bio states he’s the “luckiest man alive,” had a date with Pebble Beach last Friday and ended up getting his hands on a golf ball that has the golf and NFL worlds fired up because it used to belong to Tom Brady, who was also playing Pebble Beach the same day.

Since it’s Pebble Beach and all, Brady goes out and does what the rest of us would do in the same position — he loses golf balls. Nick, who went into the round knowing that Brady was on the course, ends up in the junk looking for golf balls and comes out with something a collector would love to get his/her hands on.

One of Tom’s balls!

Hey @TomBrady we are a couple holes behind you. Would you like this back? pic.twitter.com/OyPZ7ibDDR

And just so we’re all on the same page, Tom confirmed via Instagram that Nick’s find was in fact one of his personalized Titleist balls and that there are “many more” out there for collectors to find in the deep stuff. Here’s where things get interesting: it sounds like Billardello didn’t keep the Brady ball. He says a Pebble Beach caddie named Jack has one of the balls and another caddie named Anderson has another one. 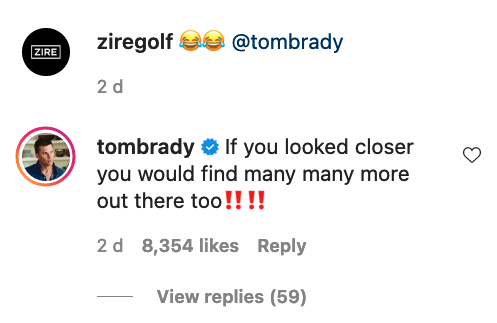 Let this serve as a lesson when you’re in the trees and tall grass hunting for ProV1s. Get a good look at all those finders, in case you’re out there hacking away with a ball that can pay for several rounds at Pebble after it goes to auction.

Nick estimates he spent $600 to play Pebble. You have to figure that golf ball is fetching $5,000 minimum at auction these days. Keep in mind, the cheapest room at the Pebble Beach lodge is $900 a night!

For those wondering if this is real, @TomBrady responded on Instagram. You can see it in this article: https://t.co/ldKAGS8OXa

BTW, the caddie has the ball. If you want to make an offer, call Pebble Beach and ask for Jack. @locktreee also has one. https://t.co/91D8ibOHyV