FanDuel users can bet $5 and win $125 simply by making the right pick in this week’s Thursday night game between the Tennessee Titans and Indianapolis Colts.

Sound easy? Maybe. While the Titans are 6-2, they’ve been anything but predictable. The same can be said about the 5-3 Colts.

Tennessee started 5-0 before losing a close one to the Pittsburgh Steelers. No shame in that. But then the Titans lost to the Cincinnati Bengals. Plenty of shame in that.

Quarterback Ryan Tannehill and the Titans rebounded nicely Sunday, grounding the Chicago Bears by a 24-17 count. So maybe they got their hiccup out of the way. 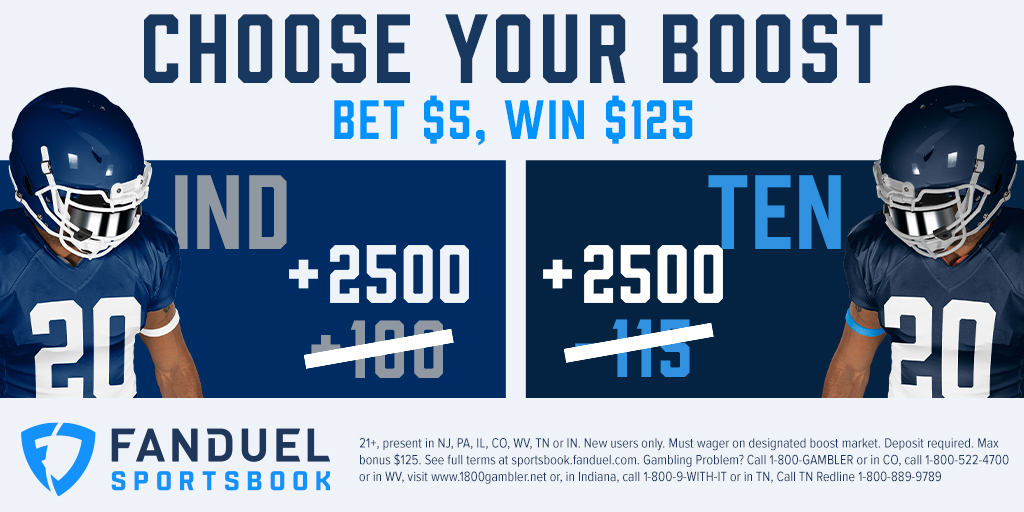 Meanwhile, after opening the season with an inexplicable loss to the Jacksonville Jaguars, the Colts have looked pretty good with new QB Philip Rivers. Their other two losses came on the road against the Cleveland Browns and last week against the Baltimore Ravens.

If the Colts have any realistic hope of winning the AFC South or making the playoffs, they’ll likely have to beat the Titans at least once.

This one would be huge, with the game in Tennessee and all. That home field advantage likely plays a role in the fact the Titans enter the game as 1.5 favorites.

Sign up at FanDuel to place your bet right here.