After hitting the links at 9:11 am EST, Woods wasted little time resembling a hungover dad who uses the first half hour of a Saturday morning round to desperately seek enough carbs to soak up last night’s suds.

After four holes from Southern Hills Country Club, site of this week’s PGA Championship, Woods found himself a sandwich, some tinfoil and a quick breather.

Tiger Woods keeping it real by taking a pack-up on his first round of the PGA Championship…. pic.twitter.com/V5S0jC0yrf

The contents of Woods’ sandwich have not yet been confirmed, though early social media speculation has odds favoring either a rueben or hoagie. Whatever sits between the foil-secured buns is working. Through four holes, Woods is -1.

More importantly, Woods may have inadvertently scored himself another sponsorship deal. This is textbook product placement by the 46-year-old, who won the PGA Championship in 2007. A couple chomps at the sandwich practically begs Jimmy Johns, Jersey Mike’s, or Quiznos to step up to the green! 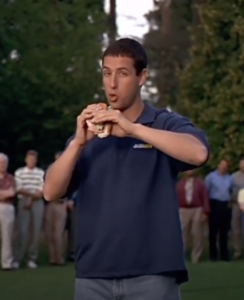 If Happy Gilmore was able to get Subway to supply him with three sandwiches a day to help keep him strong, who knows what kind of deal Tiger can score.