I’m BACK on the Thursday night grind. After weeks of rain, a northern Michigan golf trip, and a screwed-up schedule, the mowing planets aligned last night to get a mow in just as the skies were darkening up for a rain that was much needed to tamp down the dust from the mulched locust leaves.

As I mention further down the page, Thursday marked 14-straight days of above-average temperatures in NW Ohio. And we’re not talking barely above average (approximately 69.7 this time of year). We’re talking temps in the mid-80s. We’re talking plants acting as if it’s mid-August. Pools still open. I can’t even remember what it’s like to wear pants.

I was in shorts and a t-shirt last night and sweating while mowing — on OCT. 14! Needless to say it’s been completely bizarre, but the writing is on the wall. Last night, I had a conversation with my wife about making our first chili of the season. It appears Saturday will be the very first day where it’ll be bearable to suck down bowls of chili, wear hooded sweatshirts and burn wood in seasonal conditions.

Like Beau in Toledo (see below), I’ve been thinking about acquiring a load of firewood before there’s a massive rush as people figure out natural gas prices have skyrocketed. How bad will it get? The Milwaukee Journal-Sentinel reports heating bills will jump as much as 54%.

So with two weeks left in the season, my goals shift to getting the leaves off the trees — they’re not even changing — and wood stacked.

Oh yeah, and I need to get the 2021 league MVP trophies ready to be sent out. We’re going to have some fun with that part. Stay tuned.

Just when I think this league is slowing down and barely able to cross the finish line, someone like Matt in Nashville comes along and sends an email showing me what he cut into his lawn. And read that final paragraph. What an honor it’s been to work with amazing people across this country who completely understand what we’re after here. It goes without saying that 2020 and 2021 have been so damn bizarre, but then something like this project comes along to snap people out of it to where they realize this country is more than what is shown on the nightly news.

It’s been a helluva run by all who’ve been involved this summer with TNML.

After a couple of weeks off post-aeration, I gotta say (and you likely already know this but hey) that first pass through the grass is incredible. It’s like putting a hot knife through butter when you’re starving for that ‘included’ bread before a good steak dinner. The treatment worked its magic too. Every pass left a trail looking like the most expensive green shag rug money could buy in the 70’s.

It’s an incredible feeling and left me with an incredible mow, but that’s not what this is about. With long grass for the first time all year, I was able to pay tribute to the league in lawn form. The pics may not do it justice, but know it was done with love. Love for the league and all the guys and gals out there putting in the work every Thursday to make it happen. This is my tribute to them. God bless. And #TNML forever! 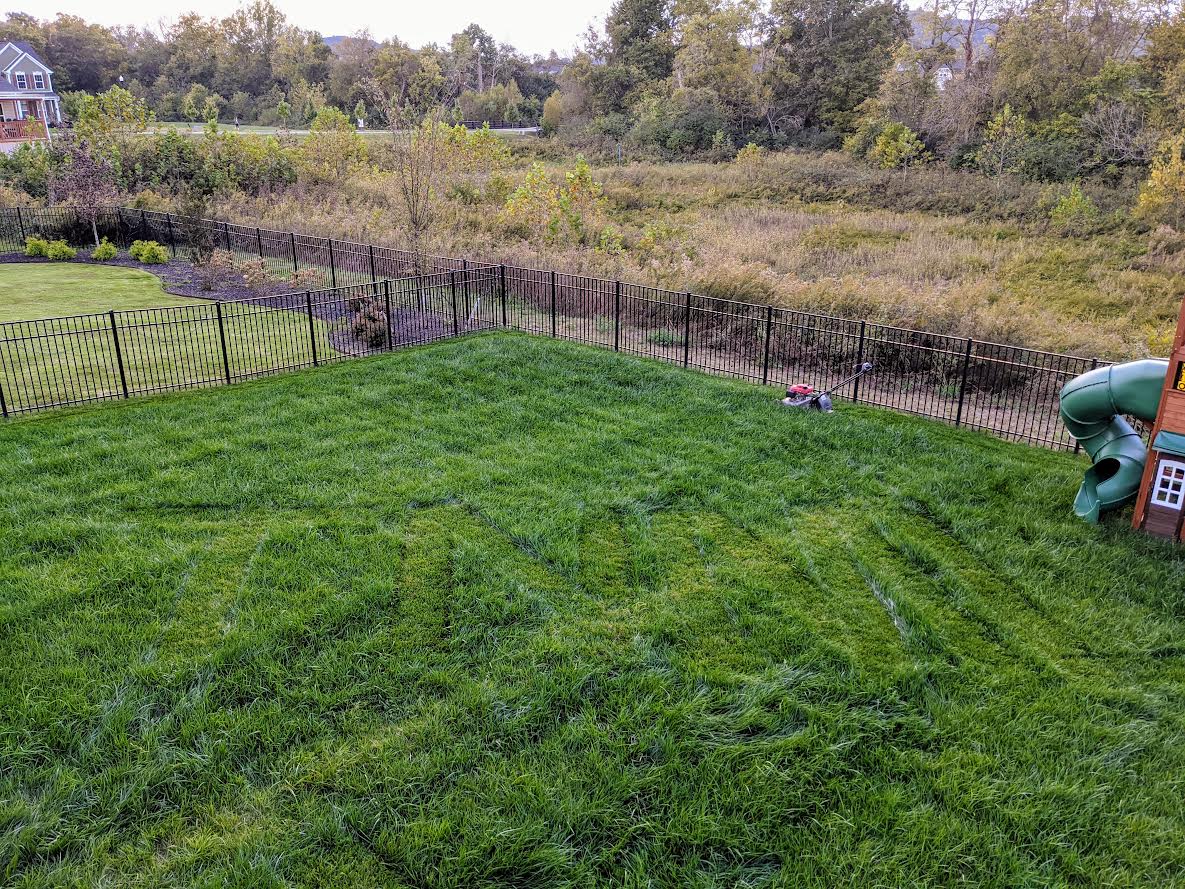 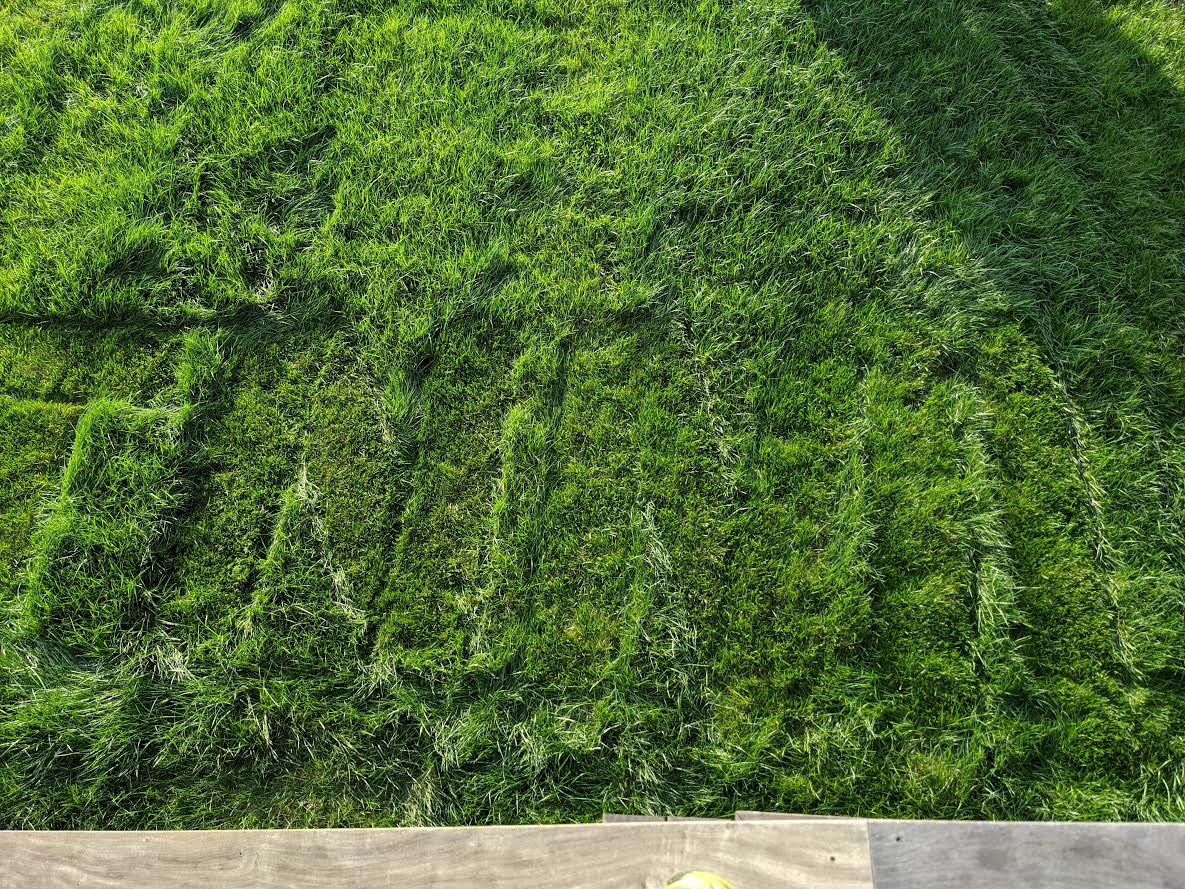 ⁦@OutKickTNML⁩ ⁦@JoeKinseyexp⁩ You know the seed took hold when your feet disappear in the fresh cut lawn like the Philadelphia Eagles run game! Love cutting this time of year. Time for a cold one and some ⁦@Eagles⁩ football. Run the ball coach! pic.twitter.com/861i3oRKut

We finally hear back from John J. in York, PA  who has a yard that I knew held some amazing sports stories attached to it from over the years. Turns out I was right. This is what it’s all about, folks.

Hey Joe. I had made a TNML column a couple of months ago with the below pics and you had mentioned how you needed details on some epic Wiffle ball games in my yard. As usual, your yard intuition was correct. I grew up on the same lot and beginning with my older brother in the late 80s and continuing with me and my younger brother into the 90s and 2000s, every year on each of our birthdays we would have our annual slip n slide Wiffle ball game.

We’d get a bunch of our friends and play a marathon Wiffle ball game where you had to get from first base to second by going down the slip n slide. It was just as fun as it sounds. Found out I had a keeper when, in the late 90s, my girlfriend (now wife), while pitching, took a line drive to the bridge of the nose that opened up a nice gash but she soldiered on and finished the game. All three of my daughters continued the tradition with slip and slide kickball games on their birthdays. Also, one backroads restaurant. The Valley Tavern in Seven Valleys, PA. Incredible fried chicken and giant pitchers for $6 every day. Keep up the great work. 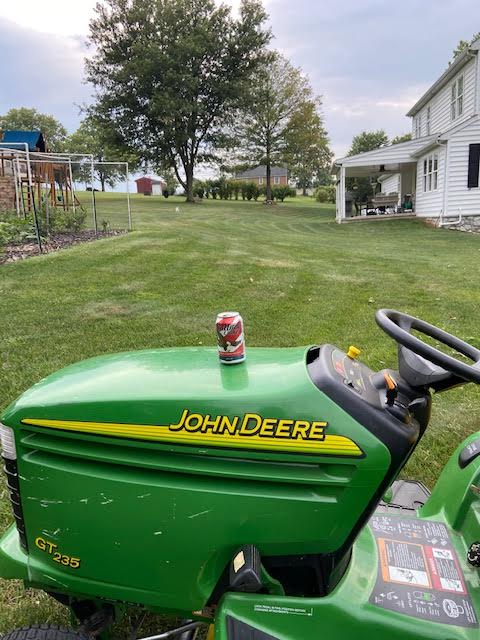 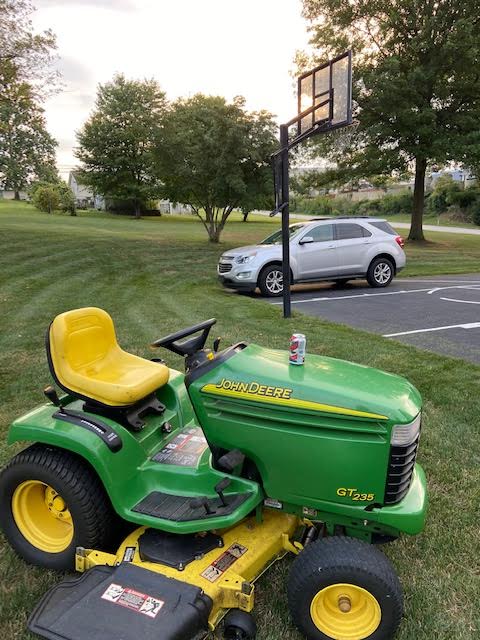 Rob S. in NC has had one helluva summer. He had hurricane damage to his pool and landscaping, but he came back strong and even had to battle the yard drying out, but here he is finishing strong. Rob’s just one of those guys you wished lived next door to you. At least I know the yard would be mowed and the garage fridge would always have Busch Lights.

…finally got some rain to give the fescue some life….got 3 generations on the lawn today.  My folks made the drive from CT to see the kids JV volleyball and senior night football game.  Still got the league cut in with a nasty on the new seed.  Thankfully my parents are in great health and are enjoying life. Thoughts to you and your pops.  Loving the screencaps they make my day.  Rob…#husqv554 #stihl #BLattes #gosox 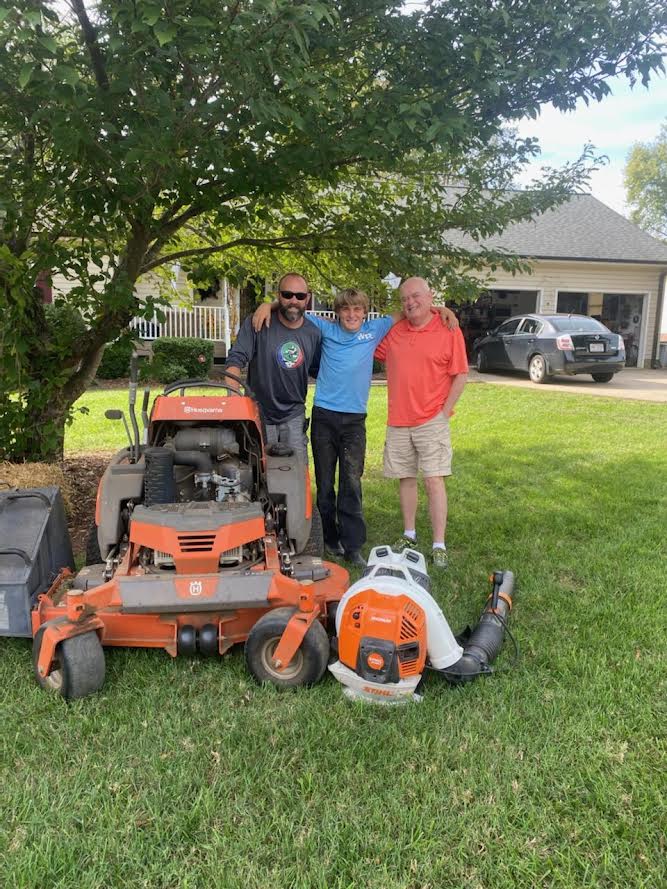 Joe- I’m here to report that I got in my final mow of the season last night. I had to get in a Wednesday mow, but I was happy that I was able to get it done before the weekend. My buddy Sean (also a TNML member) and I talked it over today and agreed that, even if the grass keeps growing, we’re done mowing in ‘021. It’s bittersweet for sure, but my old Weedeater 4.75 push mower could use a rest, and so could I.

Thanks again for organizing the league. It’s been a ton of fun for a lot of people. I’m looking forward to getting the recruiting started as soon as spring hits next year! Enjoy the offseason! 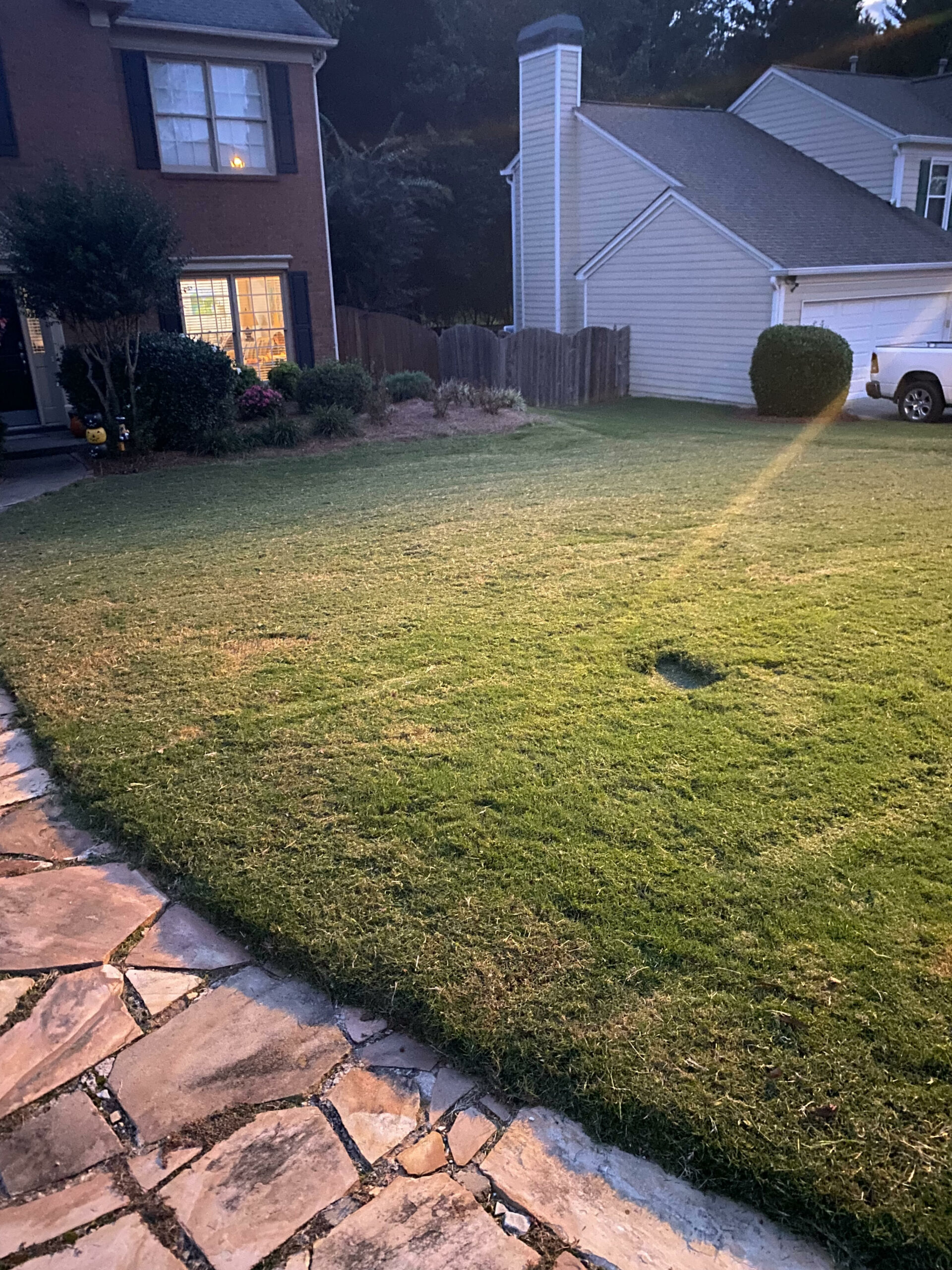 Tim G. in the 419 brings up a great point this week for those of us who’ve lived through 14-straight above-average temperature days in this part of the country:

Another solid 4” cut. Our friendly farmer harvested his beans today. The corn is still up, but beans are being harvested all over the area. Kind of strange to see such a deep green grass even after the harvest has begun in NW Ohio. 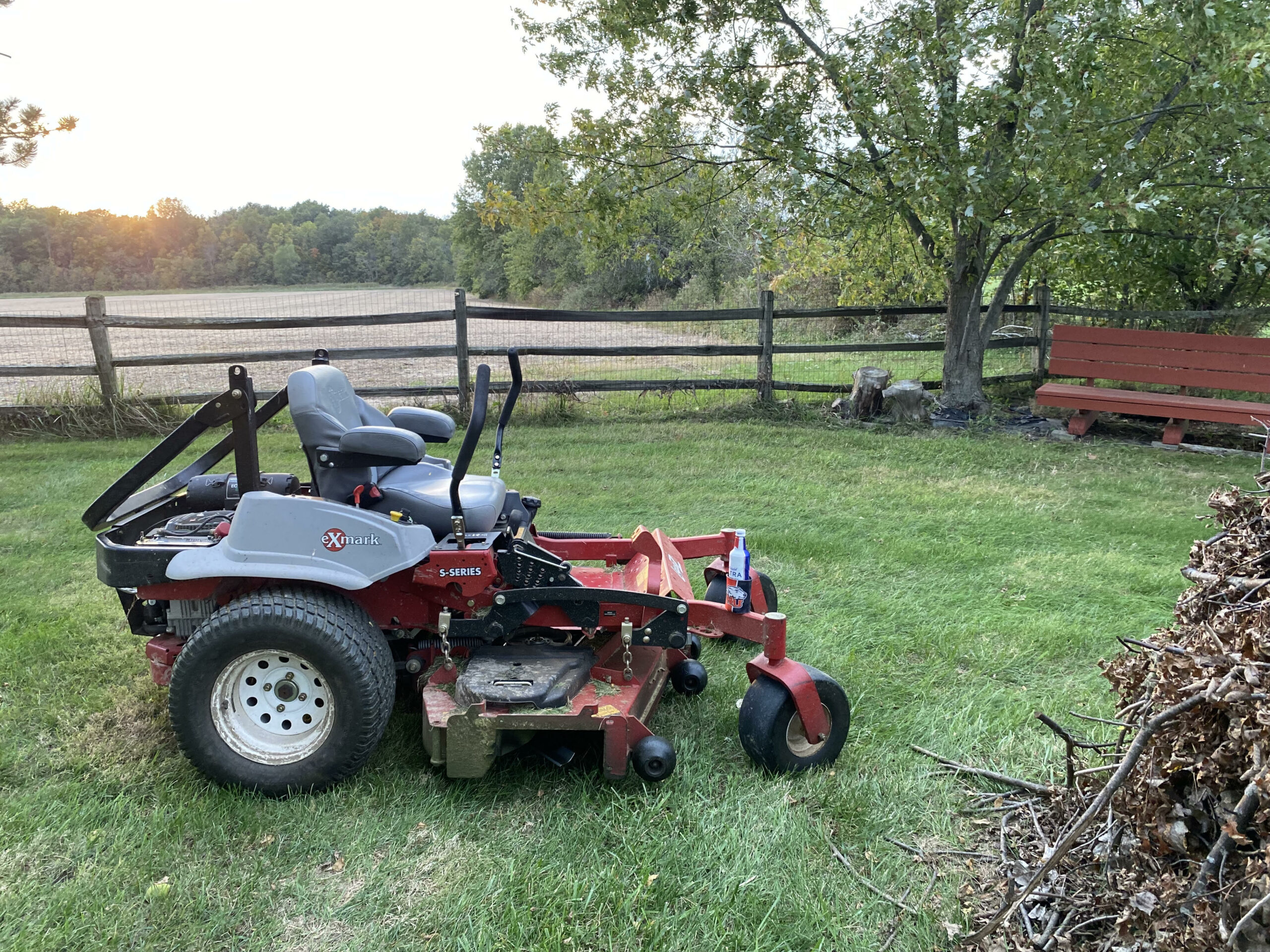 Tony C. has been busy prepping before winter arrives:

Yes sir, on Thursdays we mow, but on this particular Thursday before the weather turns, we mow, dethatch, rake, spread mulch, and prep the front yard with fall treatments.  Only a before picture from the staging area because the after was too dark to see anything…

The backyard is still on IR, but might actually be in position to return for the last week of the season. We’ll have to see if it can suit up for walkthroughs next week. 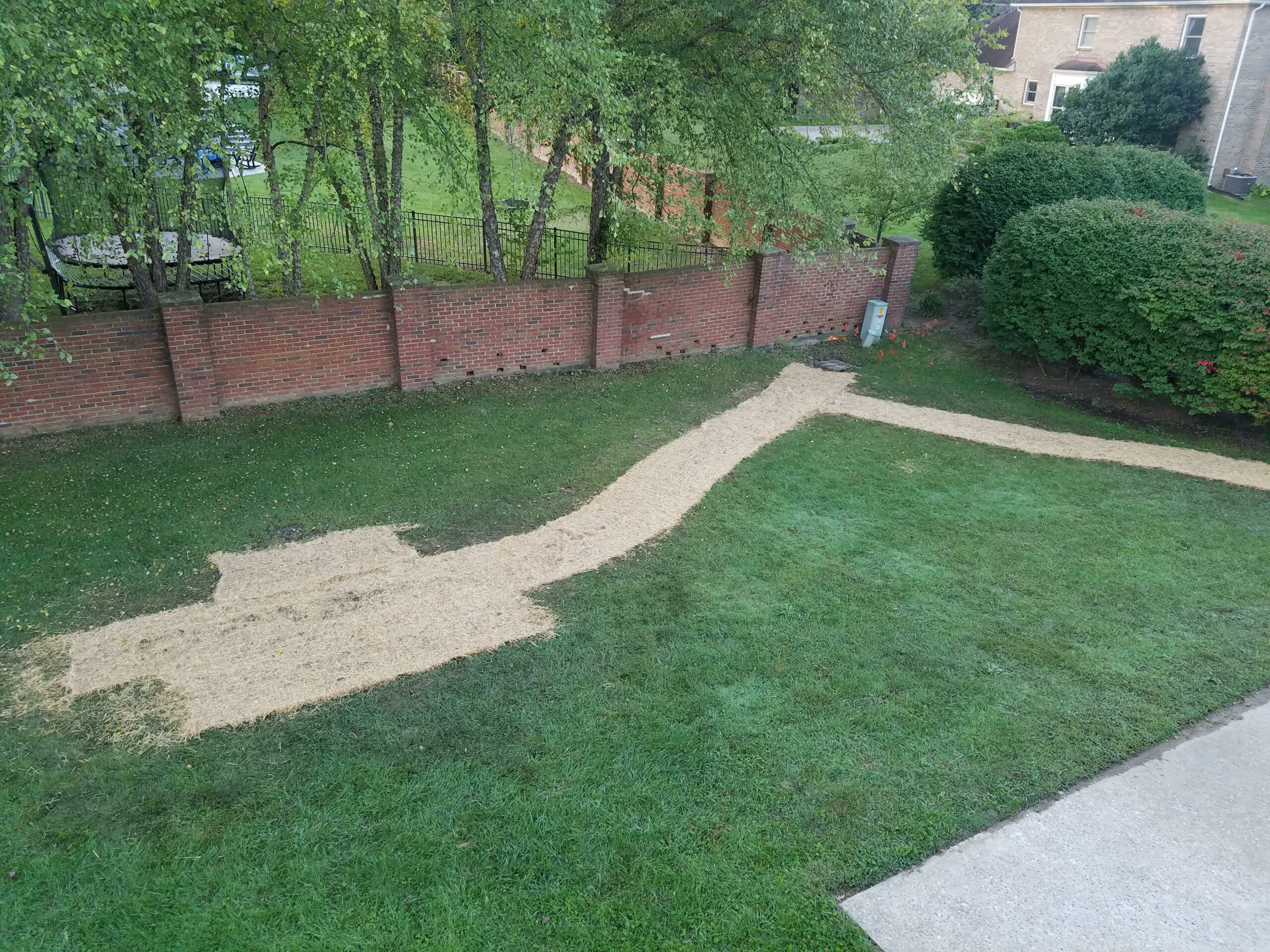 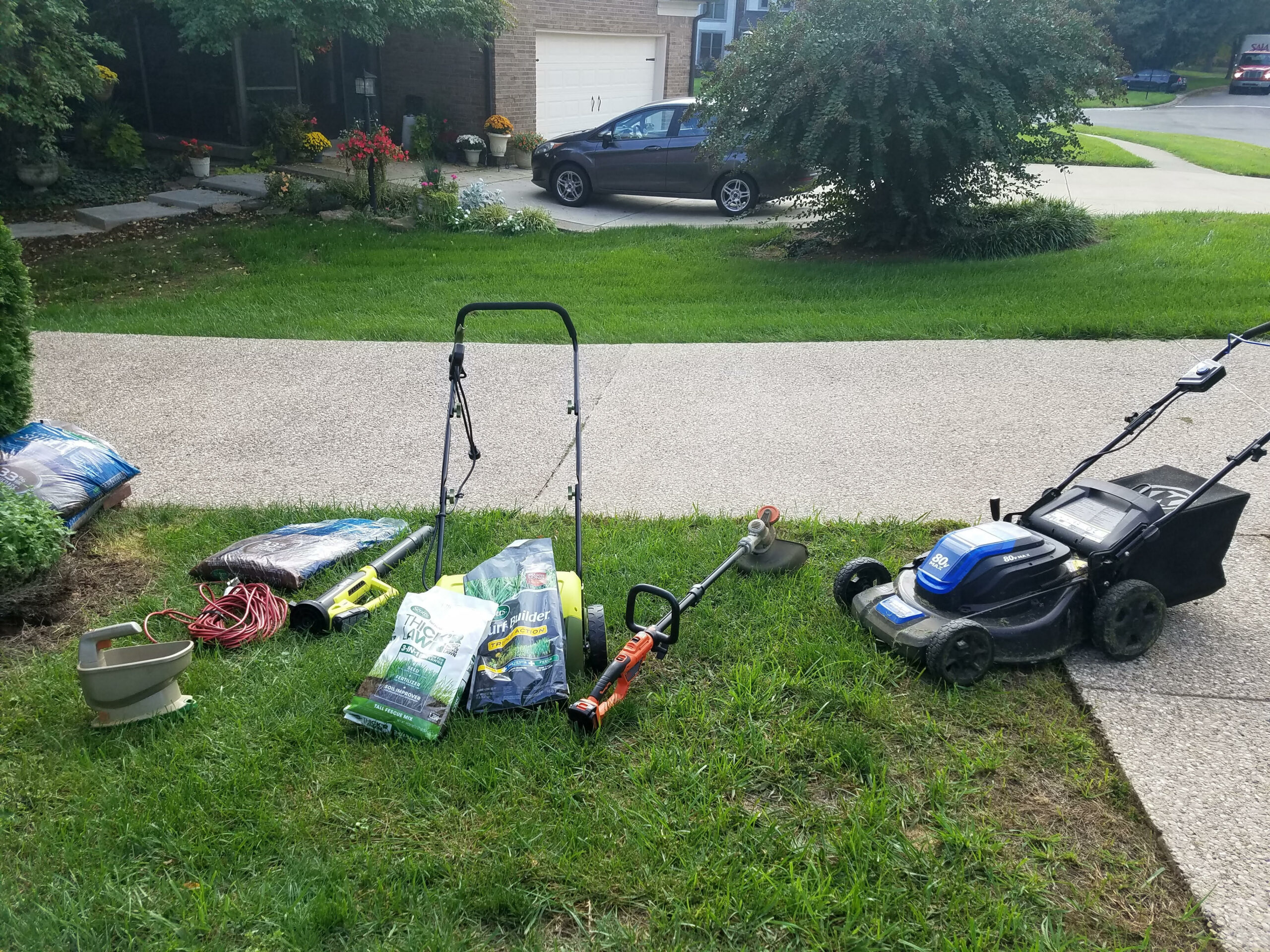 Dave in Rhode Island is back from his Ohio trip with the wife to Put-In-Bay and the Pro Football HOF and went straight to work on the yard.

Got a late one in tonight post-conference call… honestly the best it’s looked all year with the aeration, overseed, fert., and rain.
Remember the tree I had come down several weeks back?  While I was in OH last weekend my neighbor had rented a splitter – he brought it over to my place with his 80-yo dad and split that wood up for me – I owe him big time, what a friend!
Time to keep the rake handy…cheers! 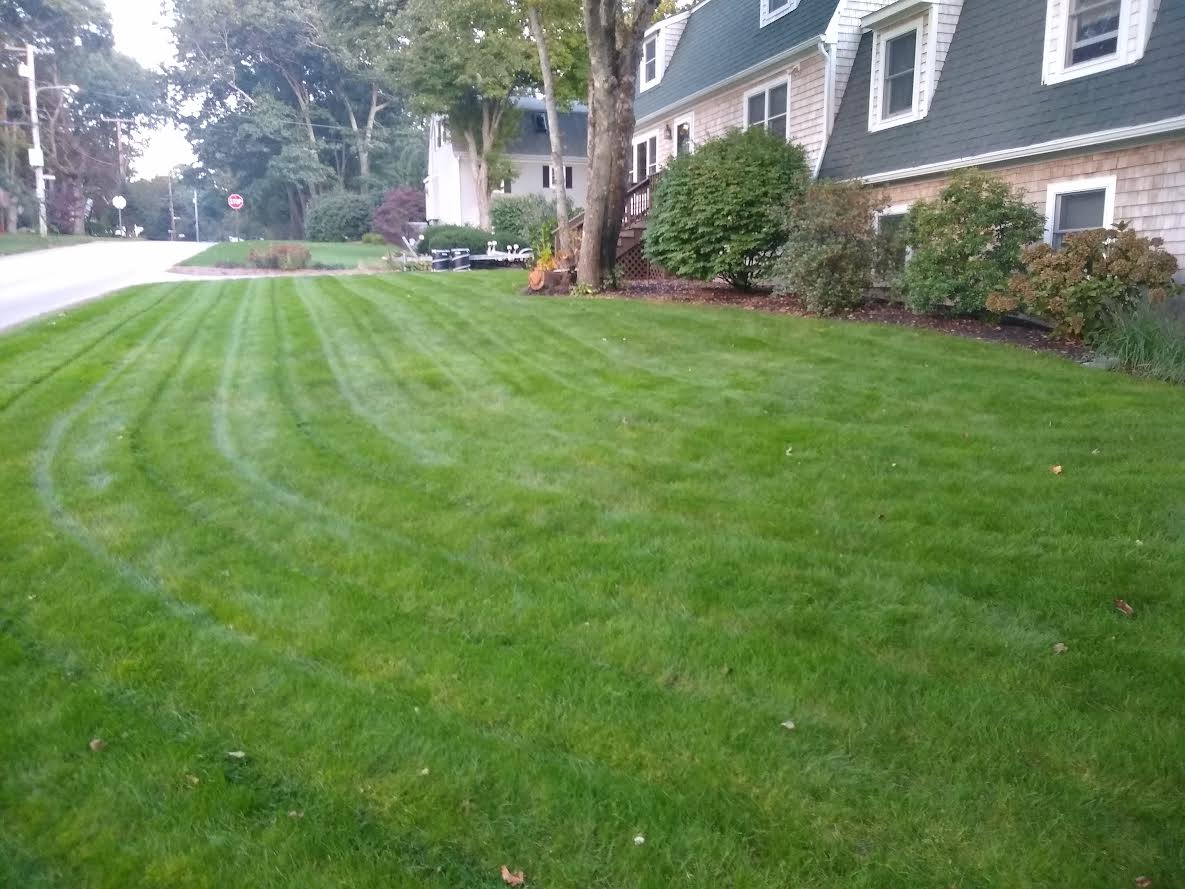 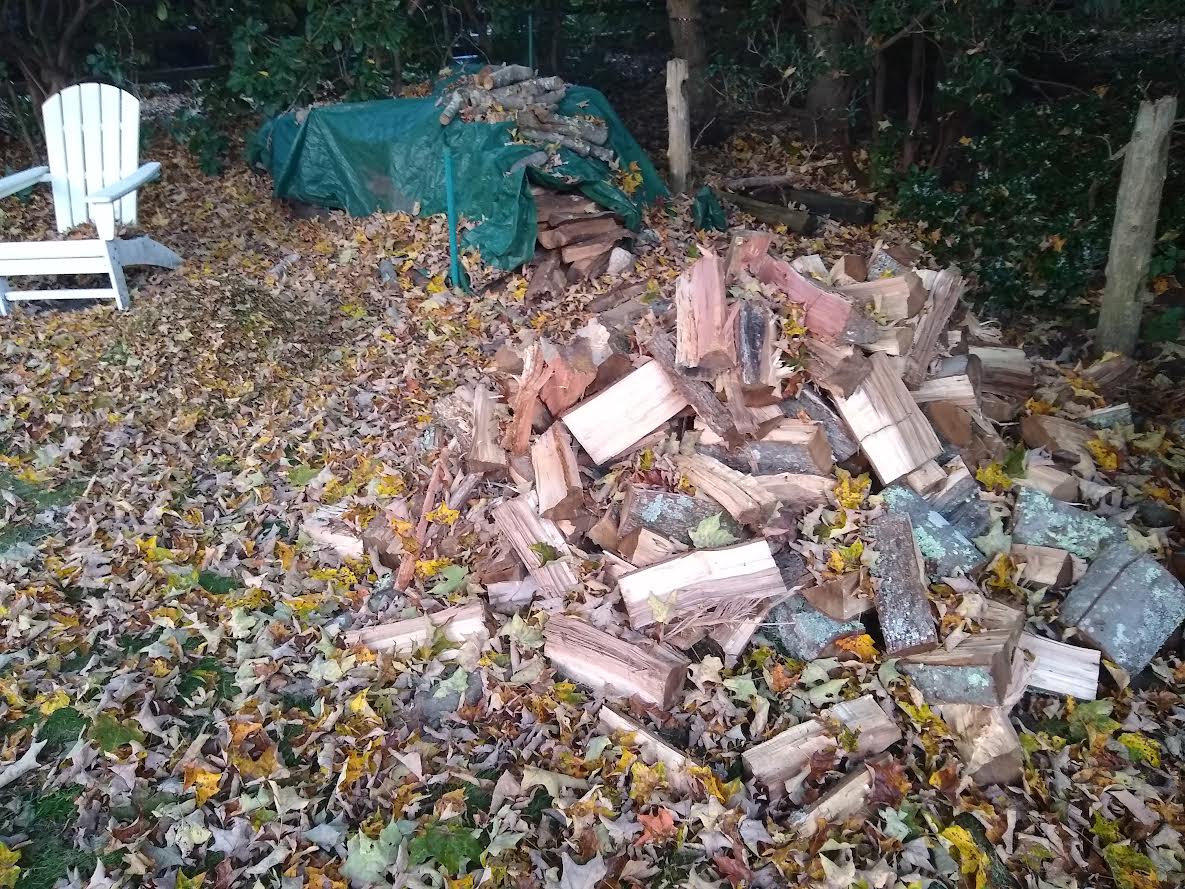 Ryan S. is a real mowing warrior. Loyal to the core. First man on the turf, last one hitting the showers. Week after week of hitting the inbox with his mowing stories. Ryan is right there in the running for league MVP.

It’s been three weeks since I’ve been able to mow on Thursday between rainouts and vacation. But, I’m happy to say I’m back and it feels great. The yard has finally rebounded from its summer slumber and is thicker and greener than ever. I actually had to give it a trim over the weekend, at 4 + inches, in preparation for tonight. That was miserable!!

My mailbox blessed me this week with some team apparel just in time for the season wrap up. Great shirt.

I’ll close with, best wishes to Beau from Toledo with his turret. Beau, I like how your thinking. 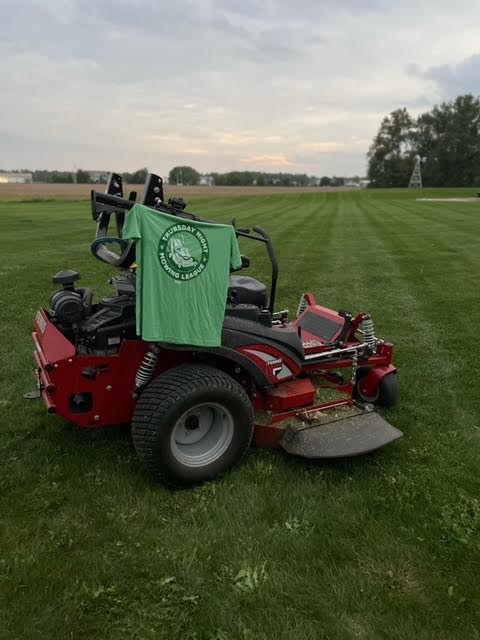 Your favorite TNML redneck Beau in Toledo spent the week in hunker down mode. He made sure to tell me the chainsaw started on the third try because he uses ethanol-free fuel:

Did some Wednesday Work to prep for #TNML and cut up some firewood that came down during some of the NWO storms this summer. Probably gonna need it since using my stove this winter will cost more than my house payment… “let’s go brandon” n stuff… 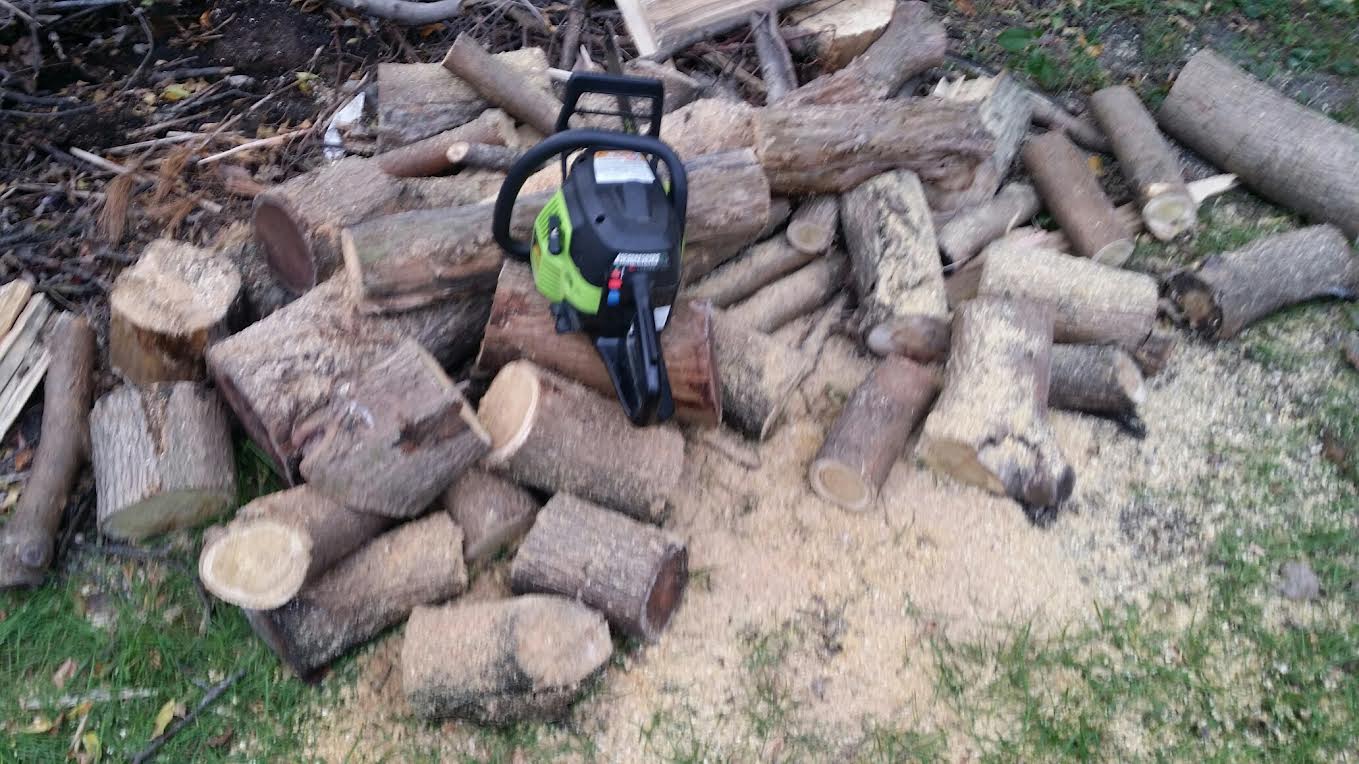 Getting closer. Just a few more days till we can join ⁦@OutKickTNML⁩! Still saving a seat for ⁦@JoeKinseyexp⁩ . #WestTexasIsTheBestTexas pic.twitter.com/0j1g97VN5Q