What a week it’s been for the league!

Thursday I brought you guys the news that the Thursday Night Mowing League has an official shirt and, according to the OutKick t-shirt department manager, you guys wasted no time slapping the ‘order’ button. This speaks volumes about you guys and how willing you are to fuel projects like this one that brings people together. At the end of the day, us sane people are just trying to grind out an honest day of work, take care of our families, have a beer on a Thursday night and let positivity run through our veins.

Guys, we have ourselves a movement. The logo is ready for yard signs. Now we’re ready for bar nights, hats, etc. If you can’t tell, I’m pumped up about this. And to think some of you guys thought Fox would send me packing after Clay sold OutKick. Nonsense! Wait until we get #TNML spots on Fox & Friends.

I can picture Kurtis in Toledo right there in the middle of Manhattan, laying down lines on sod outside Fox studios with a huge smile on his face.

• Mark W. wanted you guys to read this short story that has been floating around Facebook for several years.

I mowed the lawn today, and after doing so

I sat down and had a cold beer.

The day was really quite beautiful, and the drink facilitated some deep thinking.

My wife walked by and asked me what I was doing,

The reason I said “nothing” instead of saying “just thinking” is because she then would have asked, “About what?”

At that point I would have had to explain that men are deep thinkers about various topics, which would lead to other questions.

Finally I pondered an age old question: Is giving birth more painful than getting kicked in the nuts?

Women always maintain that giving birth is way more painful than a guy getting kicked in the nuts, but how could they know?

Well, after another beer, and some more heavy deductive thinking, I have come up with an answer to that question.

Getting kicked in the nuts is more painful than having a baby, and even though I obviously couldn’t really know, here is the reason for my conclusion:

A year or so after giving birth, a woman will often say, “It might be nice to have another child.”

But you never hear a guy say, “You know, I think I would like another kick in the nuts.”

I rest my case.

Time for another beer. Then maybe a nap.

• Don’t miss the YouTube video below from Luke in Maine who made the very first TNML YouTube video to show off his work. Here I thought photos would suffice and this guy goes out and changes the game.

• Cathy Lee in Colorado is reading my mind:

I hear you on that one Cathy Lee. Can't believe I lucked out where I live and got a Friday trash day. Blessed.

• Thank you for all the support. Have a great weekend. Enjoy being done with the yard for a few days and hang tight until the OutKick t-shirt department can get the beautiful TNML logo printed on tri-blend shirts.

Was in the DL for 2+ weeks with a blown seal. Worked through a hydraulic leak and 6+ hours, and almost finished. Knocked down 12 + refitting the PTO. Hell of a day. #TNML @JoeKinseyexp pic.twitter.com/HATrDei3hj

@JoeKinseyexp checking in with some west coast #TNML up in Oregon. Only thing better is the @DeschutesBeer IPA. pic.twitter.com/tofLNKdoxm

Cody in Tulsa checks in:

Long-time reader, first-time emailer. Pretty pumped about my rookie szn in the league. Heat index hit triple digits this week. Fresh 2.75” cut on the Bermuda, ready for Summer and the watering schedule. Got a frosty Kirkland Citra waiting on that Captain’s chair. If you ever end up in NE OK – Citras (and Busch Lights of course) on me. 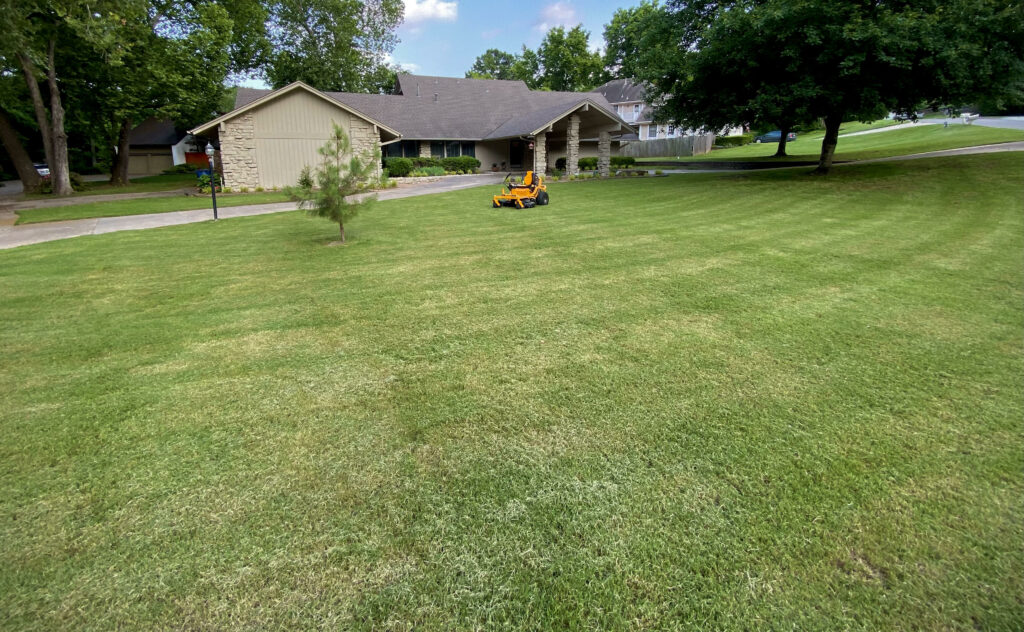 Took the commissioner’s advice and got a front yard mow in Wednesday night and then finished up the back tonight since the rain held off here in Indy.

With all the rain, the wife’s flowers in the front are really starting to stand out! New maple tree in the back meant relocating the raised beds in the back and new grass which has grown like gangbusters.

Keep up the good work!

Commish response: Favorite golfing story has to be my rookie trip to Treetops in northern Michigan with a group of 24 or so guys, many of whom I didn’t know. The first morning, word starts to spread that part of the group got all lubed up in Gaylord, MI the night before and one guy from Cincinnati, who was on the trip with his business client, left the bar and said something about getting a ride back to the hotel. Well, the client gets a call the next day from Justin to come get him up in town to make the tee time.

The business client asks where is Justin located, to which he’s told, “I’m inside a Fastenal truck.” Turns out Justin found an unlocked Fastenal truck and slept in the cab all night. Al books it to town, grabs Justin and they make their tee time. I end up paired with Justin on Saturday, we have a blast talking Cincy sports/life and now we’re friends.

Two weeks from today, I’ll be back to Treetops golfing with those same guys. The group has expanded to 32 with a few rookies who are about to get their first taste of the craziness. I can’t wait. 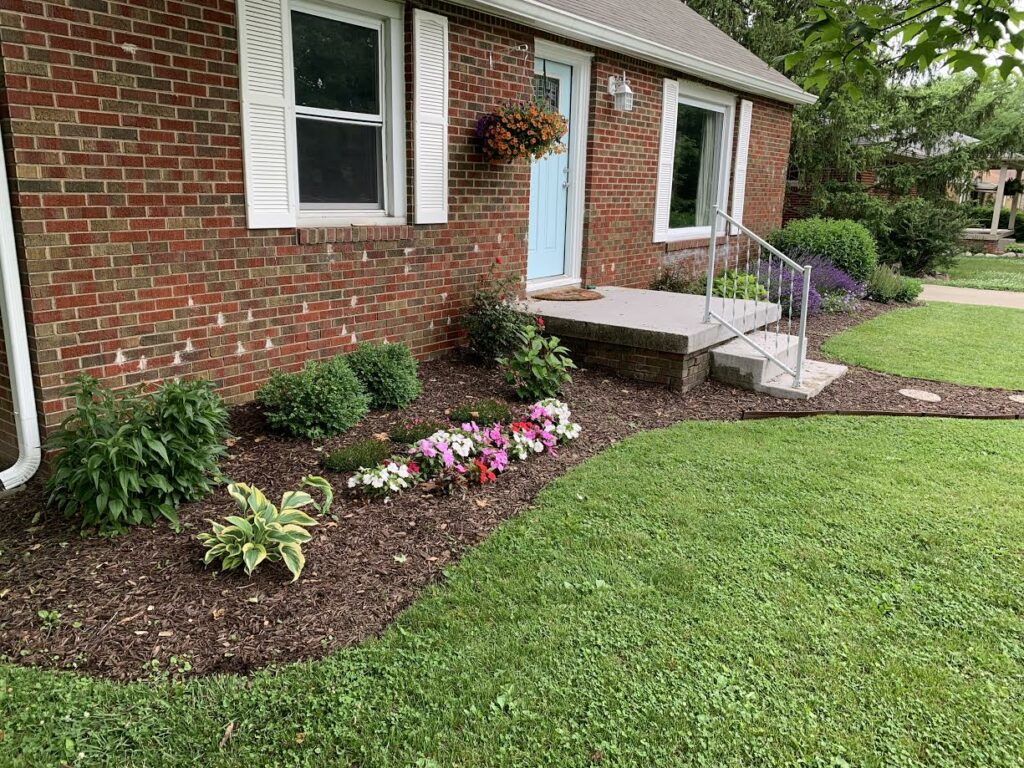 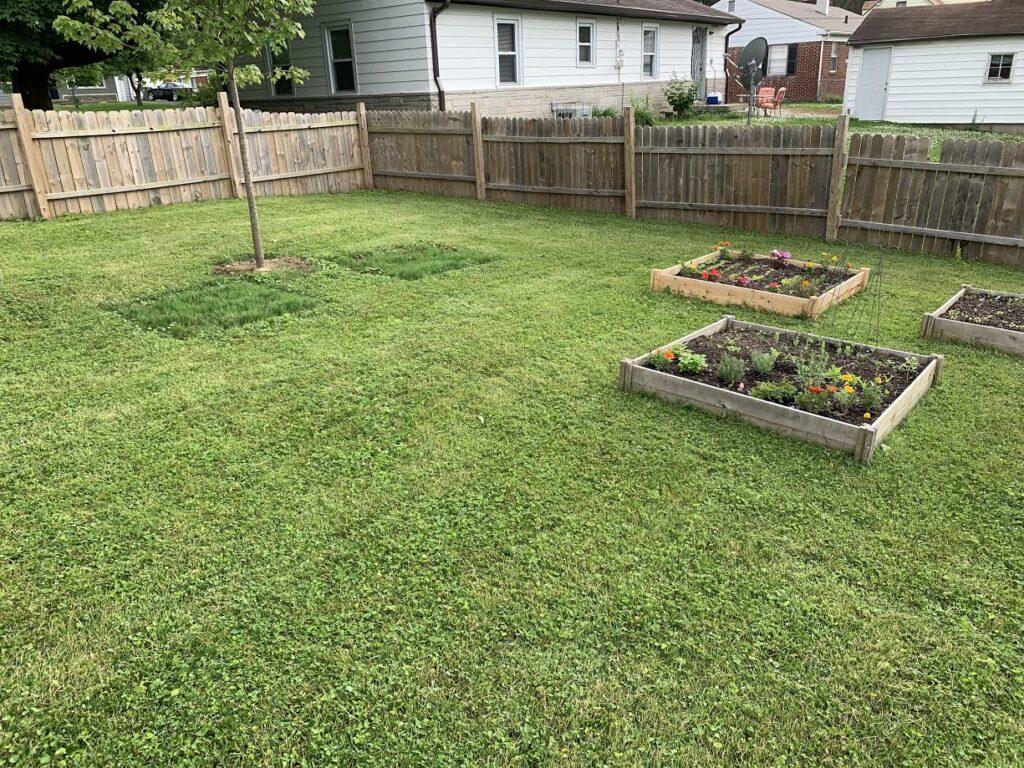 Because of the TNML I mow on Thursdays now.  First time submitting from Jacksonville, FL.  Almost got postponed due to incremental weather but it’s Florida sometimes the rain only last seconds. 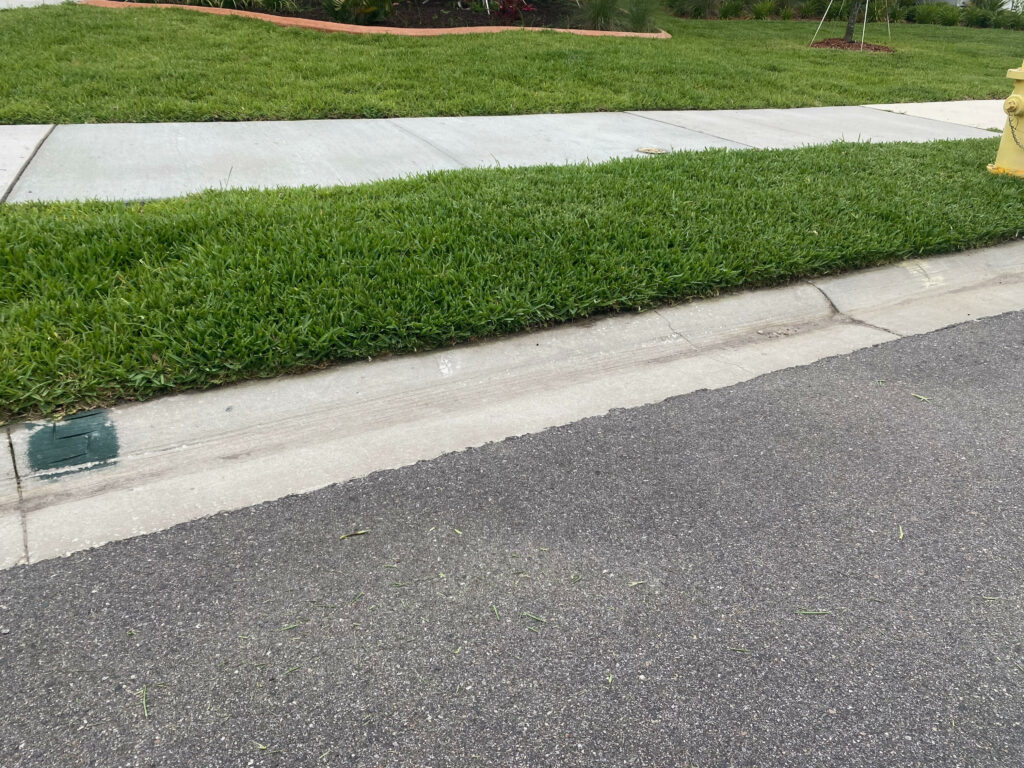 Just finished and the heavens have smiled upon me. The street sweeper was waiting for me to finish so he could make one more pass. Mean Joe Greene got a beer in this commercial. pic.twitter.com/xpmtmadI0R

Ordered my #TNML shirt this afternoon. Got the trimming done and finished up late in Nebraska with a Miller Lite. pic.twitter.com/mfK75QGBIG

First time post for the TNML.  It is hot and dry here in Indianola IA but the lawn still needed a cut today.  Thank you for the upbeat and fun articles daily!!  It’s nice to see everyone’s yard and landscape projects around the country!  It feels like we are all neighbors working hard for the small things in life and celebrating with a cold garage beer once the work is done.  Keep up the great work!! 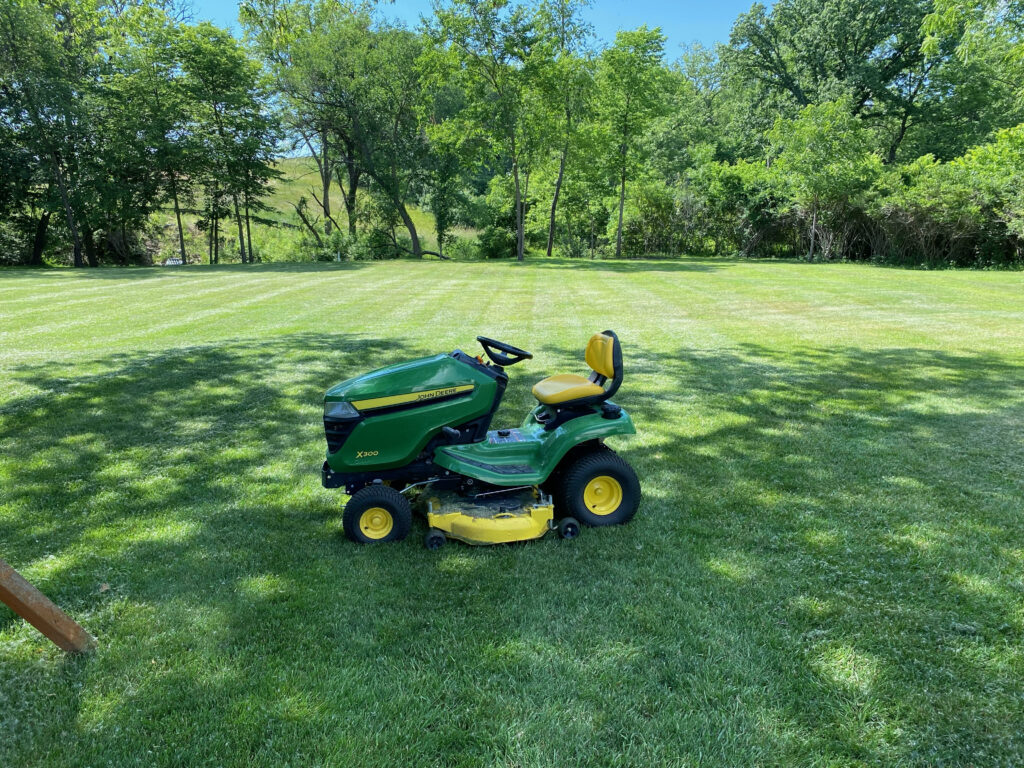 @JoeKinseyexp @blakesapp31 got me a new Echo 225 about two weeks ago to replace the old faithful pic.twitter.com/uqeHaw9yNV

During TNM spun the tires on a wet hill bringing out a caution flag.

“Hell it’s just one of them mowing deals I reckon.  I want to thank Carlisle for giving me a good tire every week.  Been raining off and on all week but the yard was still plenty mow-able. I’d seen more rain in the forecast so I was trying to get through before mowing was called and I’d end up mowing with the losers on the weekend. I had lost some time already going around the yard spotlights so I was trying to stay on the lead lap before the caution. Hell it was just driver error I reckon. I come In to the hilltop too hot, spun the tires and got stuck.  I hate it for the sponsors and boys at the shop. I was able to finish before the weather moved in though. Thanks to Husqvarna and Stihl for the weed eater and blower I used to make up time and finish today.

I hate not mowing as well as we could but we’ll have the RGC Mowing-JackDaniel-Addidas-RC Cola—Goodwrench-John Deere X380 gassed up with no- ethanol fuel and look for a quicker finish next week!”

I have “ summer grass” now so full yard picture now, I have better cool season grass. 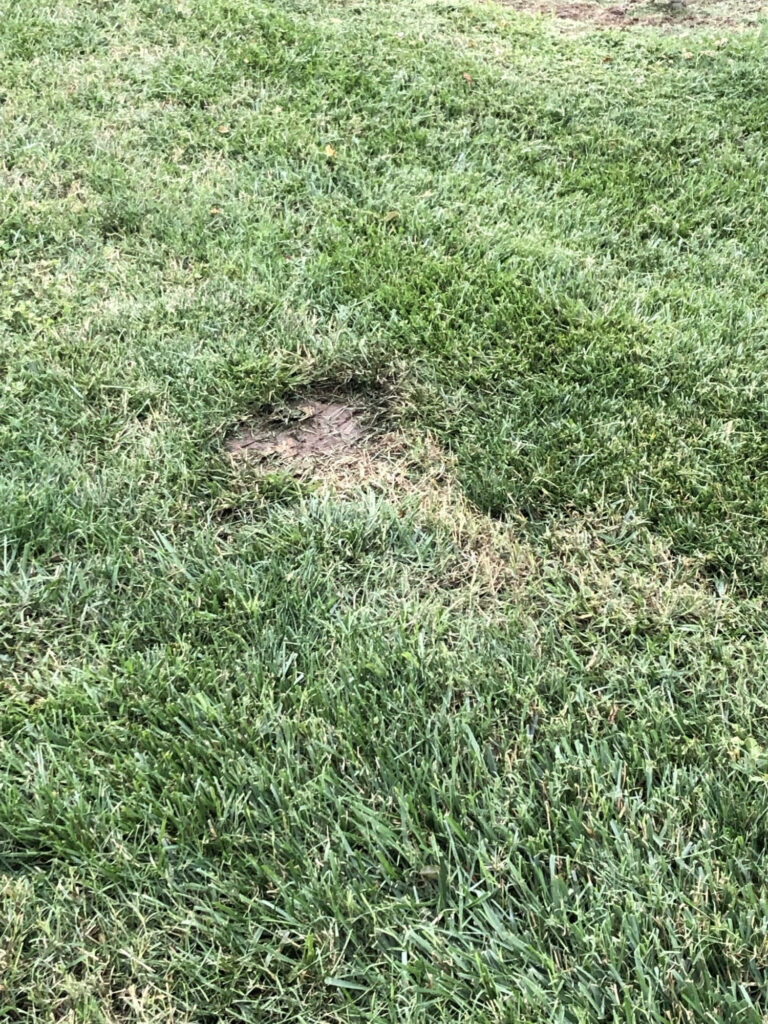 Wet conditions in South MS have continued into this week forcing me to cut my yard on Monday. Did some trimming yesterday and took it to the weeds with some Round Up. At this point, I’m just admiring everyone else’s work and enjoying a light beer brewed locally by @soprobrewco pic.twitter.com/5aLRQuAe3L

Dave in RI (looking at Dave’s setup, I have to believe we’d get along real well) writes: 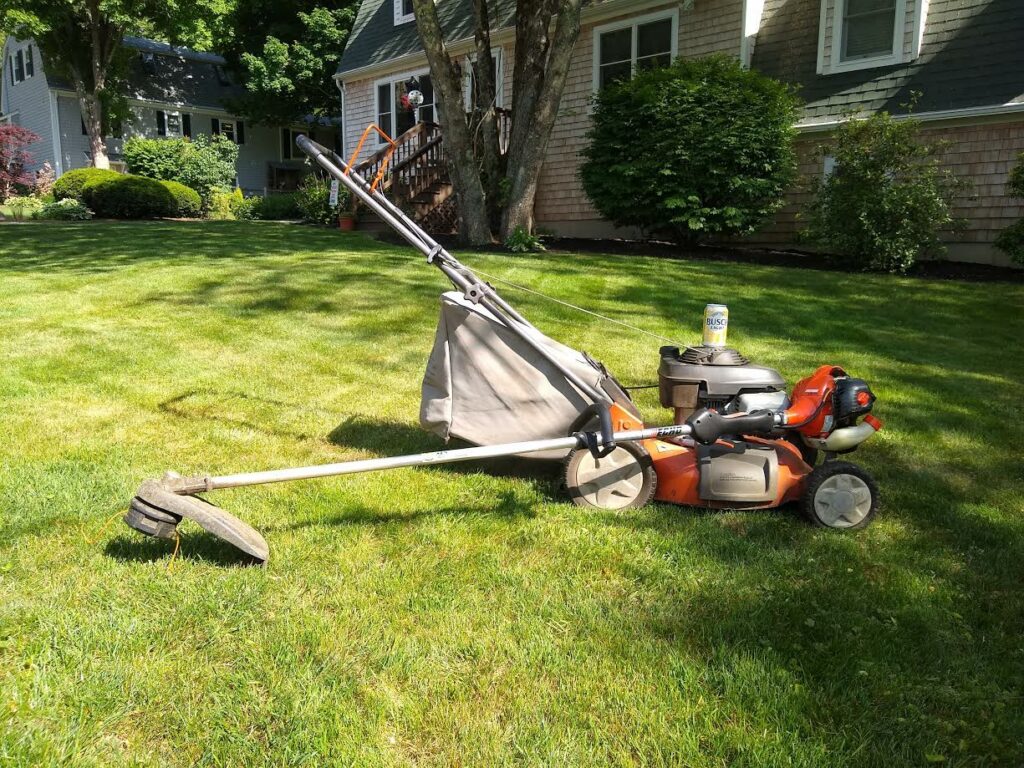 Can I be in the TNML if I make my teenage sons mow on Thursdays?  At least I’m not paying someone else to do it while they play COD, right? 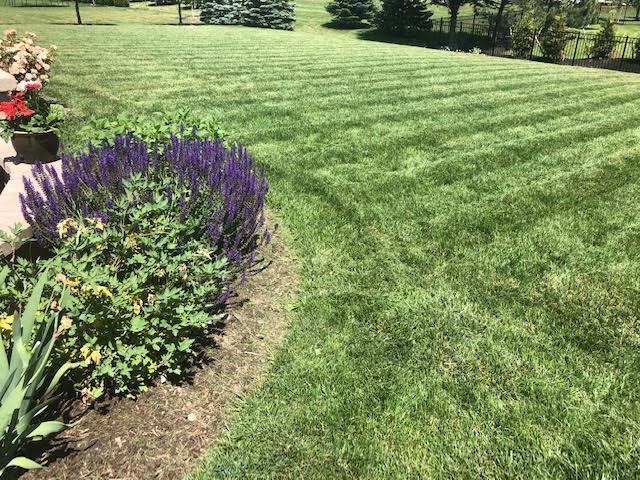 Tulsa finally got some sunlight but I absolutely paid the price for it tonight. Fought through the heat advisory despite the air being too thick for breathing. Sealed the W with the @budlight tall boy. #TNML pic.twitter.com/VTjUz9M2mQ

Just snuck in a #TNML session before dusk in Plano, TX. Shiner Sea Salt & Lime while cleaning up. The Texas heat has finally arrived. pic.twitter.com/yunAy0ZKLJ

@JoeKinseyexp realized I would be mowing first Time on a Thursday and chance to post to #TNML Chicken on the Traeger, Pup, Budweiser and Crocs. Is there anything else to life? pic.twitter.com/FiUcBzd0Vr

Survived the hottest day of the season! Started in the sun finish in the shade. Pro move #TNML pic.twitter.com/kDPOittt7Z

Paul B. in Bethlehem, PA has battled the elements, but things appear to have settled down and the turf is looking lush:

Back in the game IN PA! 2 shirts will be ordered by the weekend! 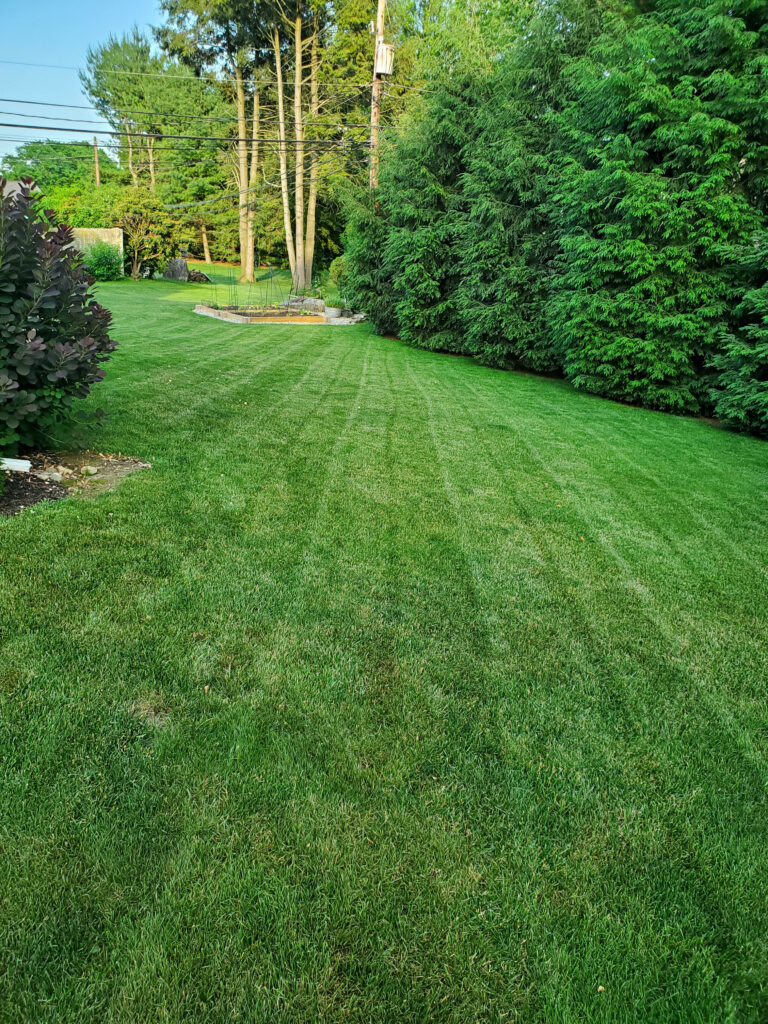 It’s a good day to admire the lines… 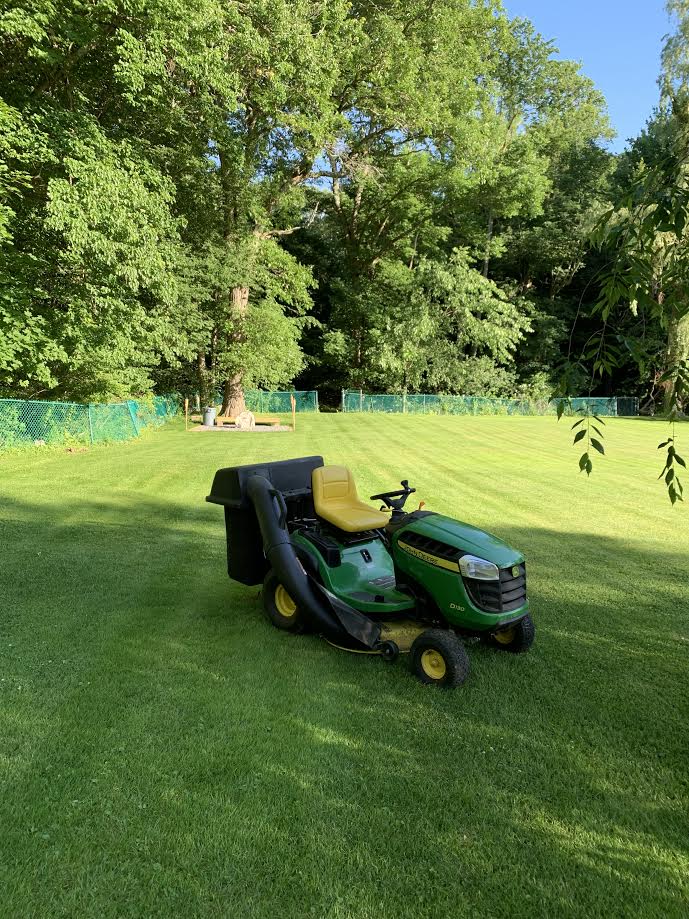 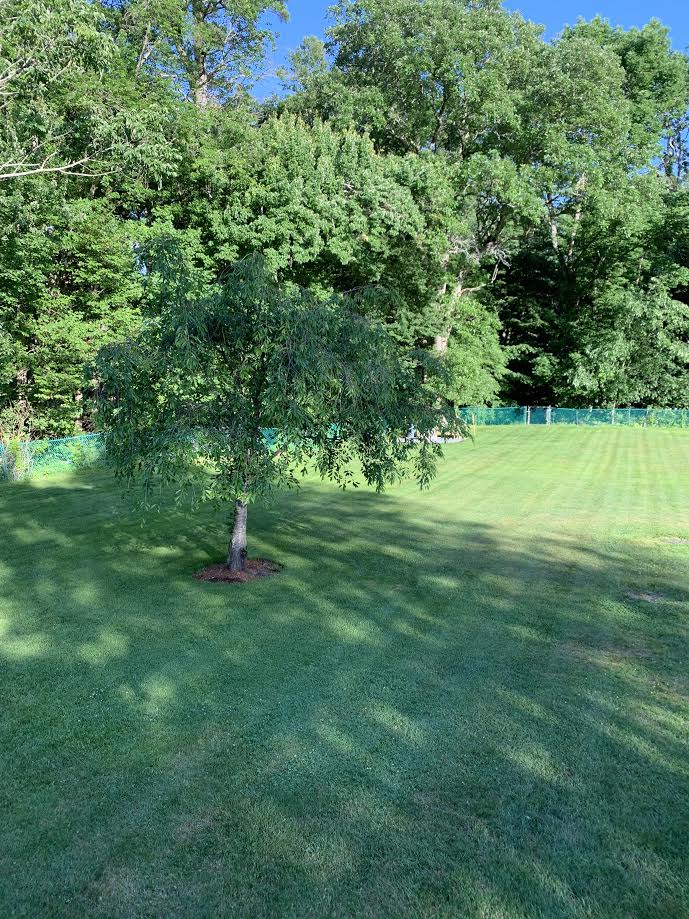 Keith H. in Rocky Face, GA gets into the league: 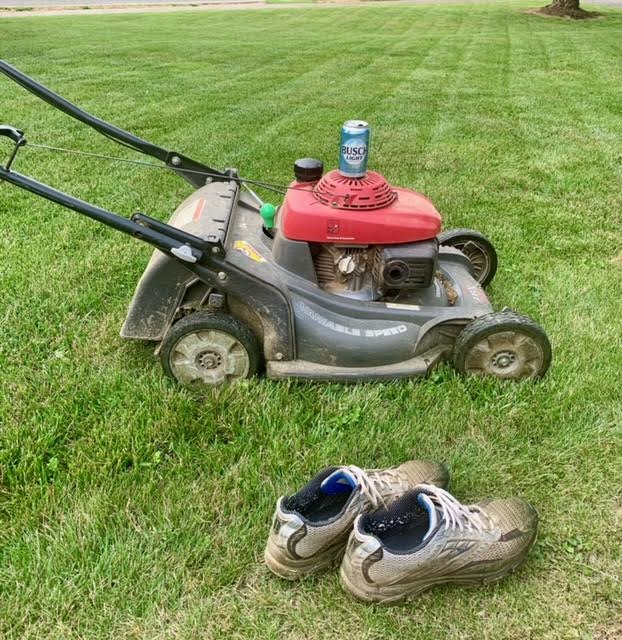 Checking in from Munford, TN just north of Memphis. I’m glad to see there are other practitioners of the weeknight cut. Bring on the t-shirts and yard signs. 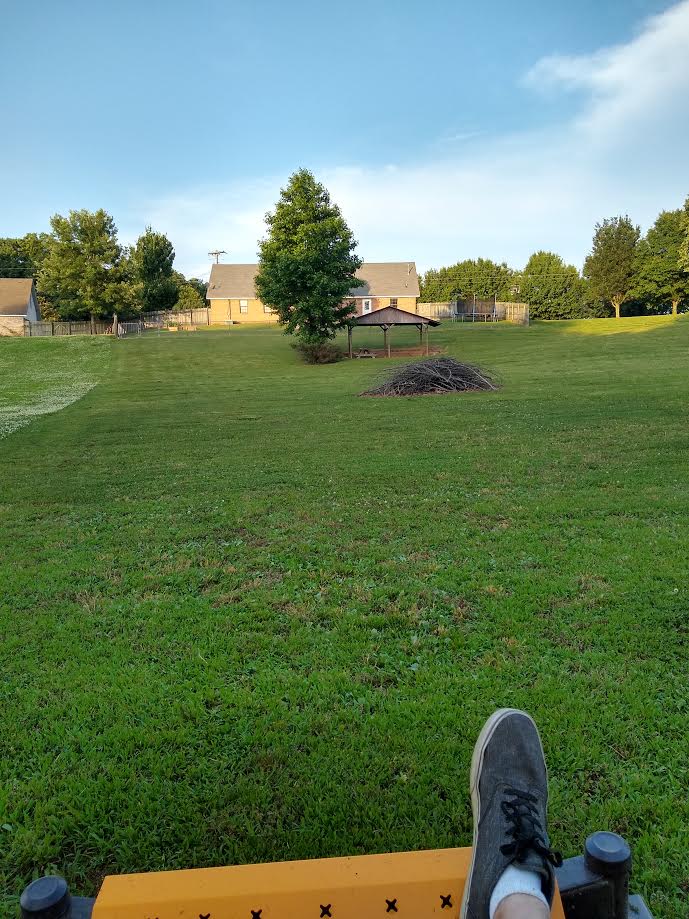 @JoeKinseyexp We’ve got a break in the 4th day of rain in southern Indiana. It wet and it’s hot, the Natural Lights are wet and cold. #TNML pic.twitter.com/PJSH7Bhemy

@JoeKinseyexp Yes I finished mowing at 10:04pm. Yes I had to mow a setting higher and a day early. Rain drenched the lawn at 6pm during football practice but I had to stick to the plan.
Loved reading that you were also going to mow a day early. Weather/Humidity is nasty!#TNML pic.twitter.com/8KYjh5yrnj

.@JoeKinseyexp had to get a jump on #TNML skipped last week b/c of dry conditions, hoping for rain tonight, plus nephew is pitching in hopefully a close out game for @SRbaseball16 tomorrow to go to state! Wind down beer choice is @MooseLakeBrew best small town brewery anywhere! pic.twitter.com/VwdE0bquc9

I told my younger brother about TNML and showed him this pic. Here is his response:

You may soon have the nickname from your neighbors as “Jehovah Thickness”, because with grass that thick and green you can’t help but witness to everyone in the neighborhood.

Have a great weekend away! 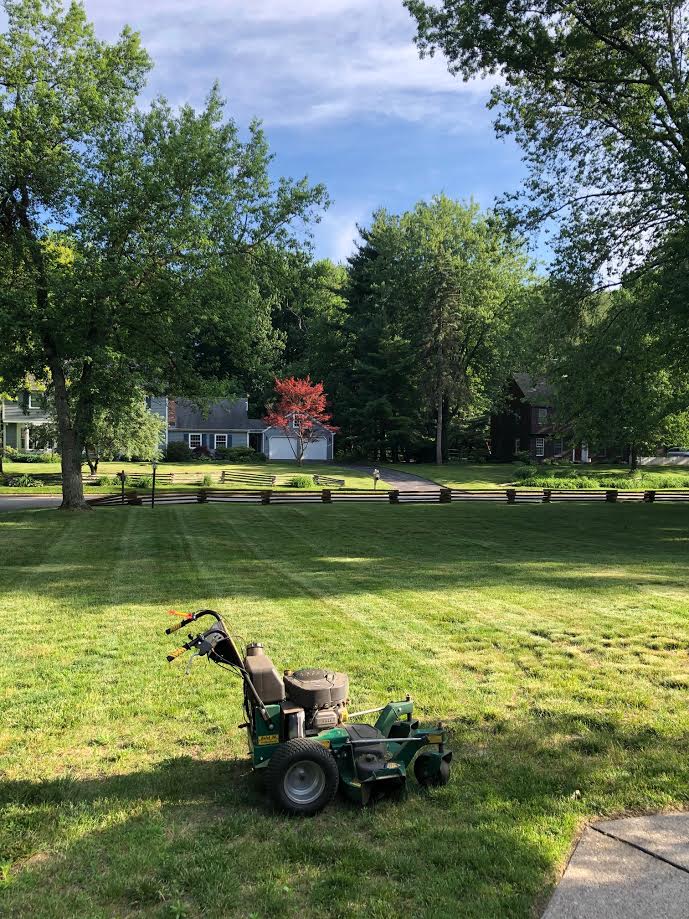 Here's the final product (along with the newly-planted snap dragons from this weekend's landscaping project): pic.twitter.com/uDUXC4BaDO

@JoeKinseyexp day/night doubleheader for me today. Finished my place up early, heading to take care of Pops place this evening. Rain has been an issue for sure. #TNML pic.twitter.com/qhr1eW2Iq8

Beau in Toledo has a new baby:

Picked up a new rig from #SylvaniaMowerCenter — 2nd one I bought this year! And I got it just in enough time for #TNML!! 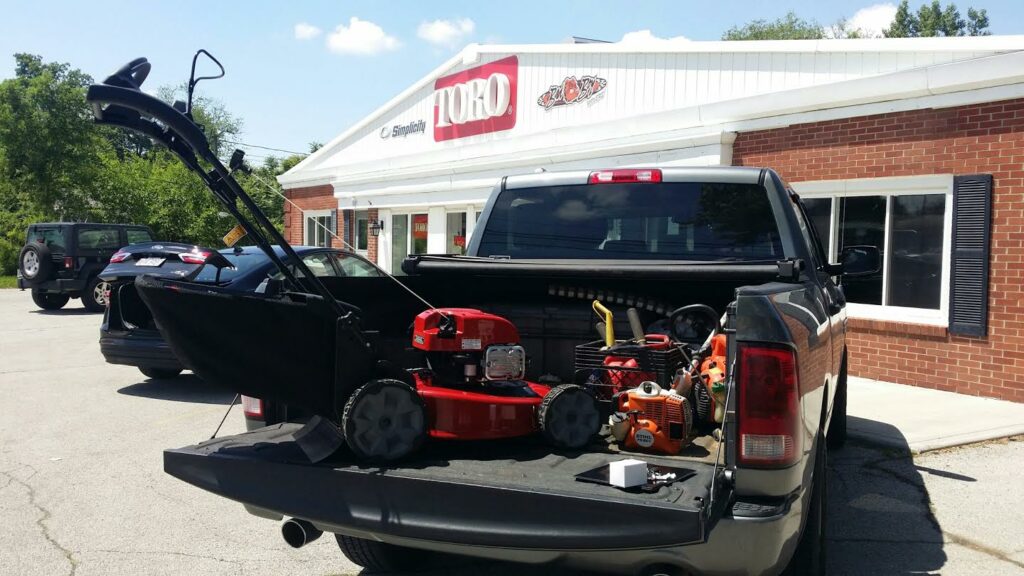 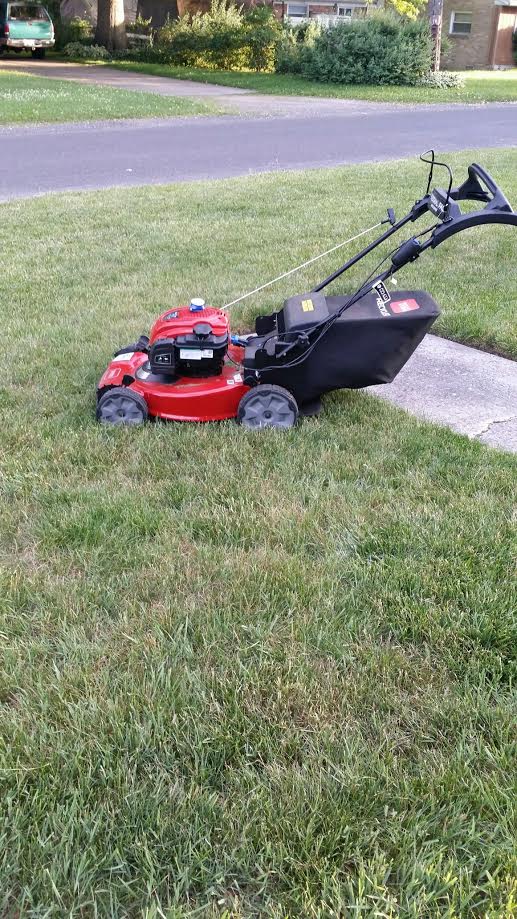 Beau sent another text to say:

This may be too graphic for the page, but the ‘Murica FunLoving #TNML might like it; these little buggers are GreenGrass Terrorists, so i thought I’d share… 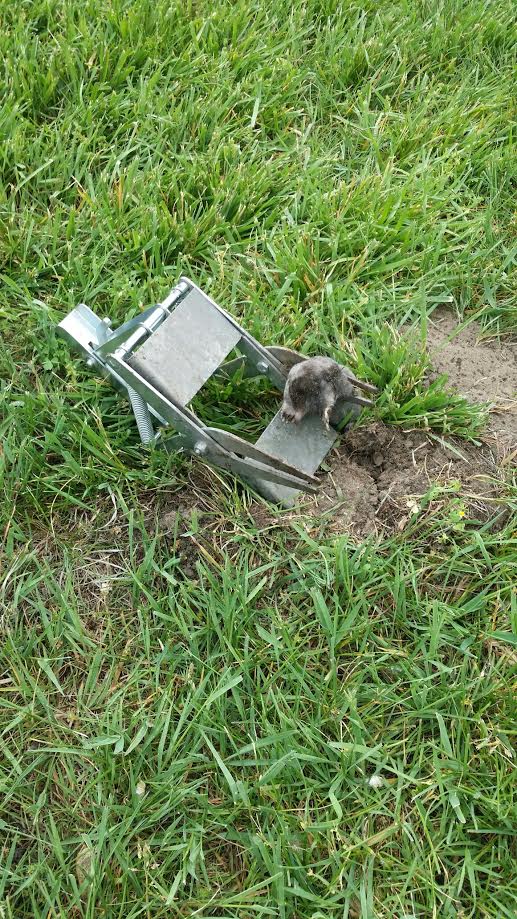