Full disclosure: I didn’t mow Thursday night. I mowed Tuesday night. It’s one of those weeks. I was stuck in a situation where my mother flew into town yesterday which meant I was at the mercy of Allegiant Airlines for schedule delays and it also rained. I made the executive decision early in the week to go ahead and get an emergency mow in on Tuesday just in case the schedule went haywire.

Then it went haywire.

Allegiant wasn’t terribly late, but they were late. Then there was a torrential downpour over my neighborhood. I’m talking a quick deluge. Then came dinner with mom. Before you know it, the sun is going down and it’s time to get the trash out.

Look, am I proud to miss a league night? Not at all.

Does this mean I’ll have to get an emergency mow in at some point today because we have people coming over for a birthday party tomorrow? Yes, it does. Is it hot as balls outside? Yes, but there are guys roofing houses this afternoon. I’ll be just fine.

You guys might have noticed that the TNML reports have tailed off a little bit over the last few weeks. There are a few things in play here: drought conditions (I’m beginning to wonder the last time our friends in Utah mowed), heavy rains and fatigue have set in.

But this is where I need you guys to dig deep. We’ll be naming TNML MVPs at the end of the season and I’d hate for some of you guys to fall off down the stretch and miss out on what I have planned in that department.

Here's the latest drought monitor released today across the United States as of this afternoon. Yellow areas are "dry" whereas the orange and red get into more serious drought conditions. pic.twitter.com/iLZq4COSzR

And finally, this week, take the time to read this email from Don B. in Big Canoe, GA. The next time someone asks you about this whole TNML thing, remember this email. It’s not really about the grass. It’s about everything that goes with it. It’s the responsibility. It’s the care. It’s the pride. It’s the family bonds. It’s the memories. This one got me good.

Wanted to share something quickly – I am 64 years old and all through Middle School
and High School, as I came home on the bus, my Dad had all our lawn equipment sitting
in the driveway. Riding mower, edge/push mower, rakes, driveway edger, etc…
Every Thursday – every week. No exceptions.

And every time I rolled my eyes and thought can’t we skip this just once?

My Dad passed away 5 years ago this Sunday (August 29th). I would trade the world to
be on that bus just one more Thursday and see our lawn stuff sitting in the driveway.

Your TNML brings back such great memories. Keep up the great work.

Ryan S. in NW Ohio is quickly working his way towards a TNML MVP trophy. This isn’t me being a homer. I wouldn’t know Ryan S. if I passed him at one of the local grocery stores. I’m just a commissioner who knows loyalty and production when I see it.

After an extremely long, but exciting work week, I must admit, I’m exhausted. I looked at the lack of grass and felt the outside temp when I got home and thought, not tonight, I’m sitting this week out.

Nope, NOT A CHANCE, waited a bit for the sun to get low and got busy. I figured the yard needed lined up as much as I need to rest.  Fortunately, no artillery was needed this week. 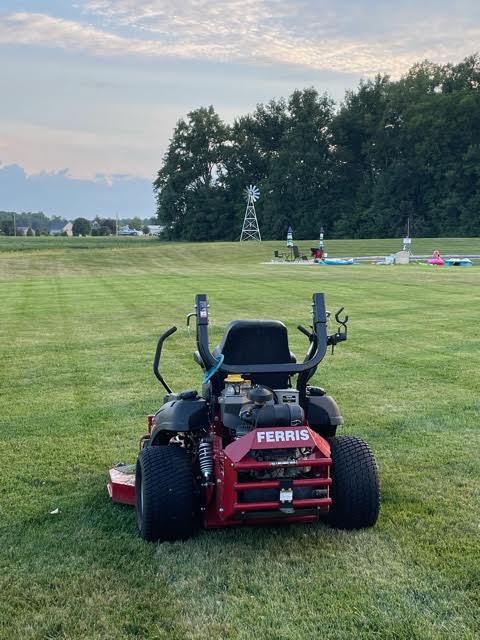 Indy Daryl is back. Last week he sent a very impressionable email where he mentioned a “Do Hard Things” mindset that TNML members live by.

Daryl dialed it back with this email, but I think you’ll love the message:

Good morning! Sun was hot here in Indy (mid 90s before the rain) but I got the job done. Thanks to Yard Machines and Kroger Seltzer for getting me through!

You asked yesterday what brings joy or happiness into your readers’ lives and increasingly, for me it is watching bees. We have these large lavender bushes right below our huge front window, and at all times of the day the bees are fluttering in and out. It’s simple, but having my morning cup of coffee, before the kids wake up, with a good book, and watching the bees on the lavender is an amazing way to start the day. 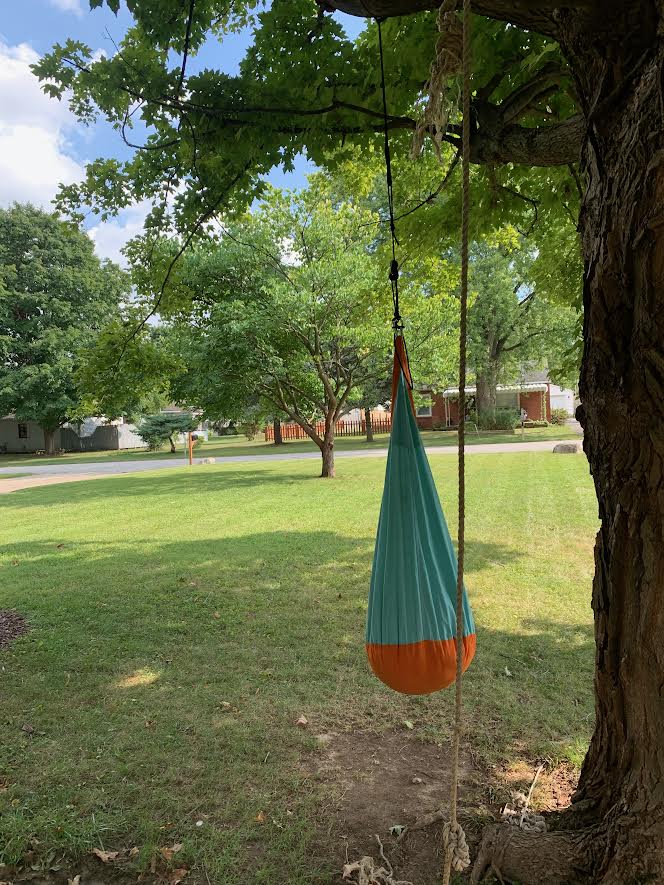 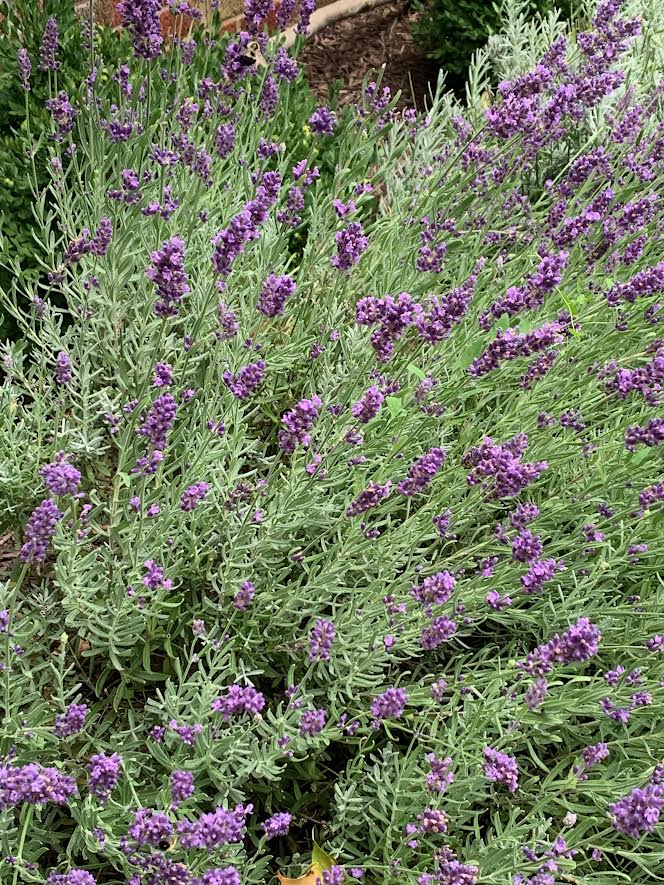 Dave in Rhode Island had an issue this week:

Disaster narrowly averted this past Sunday during TS Henri – wife and I were sitting in the living room when a sudden POP! jolted both of us up – a large trunk of our front yard maple tree bit the dust! Super lucky that it didn’t hit anything, narrowly missing the power lines at the street.

Quite a bit of cleanup later, including some nice firewood for the outdoor pit for next season, and we are back in business. First mow late this afternoon post-cleanup, and the yard is getting back to normal. Cracking a cold #buschlatte and toasting to no more hurricane threats this season! 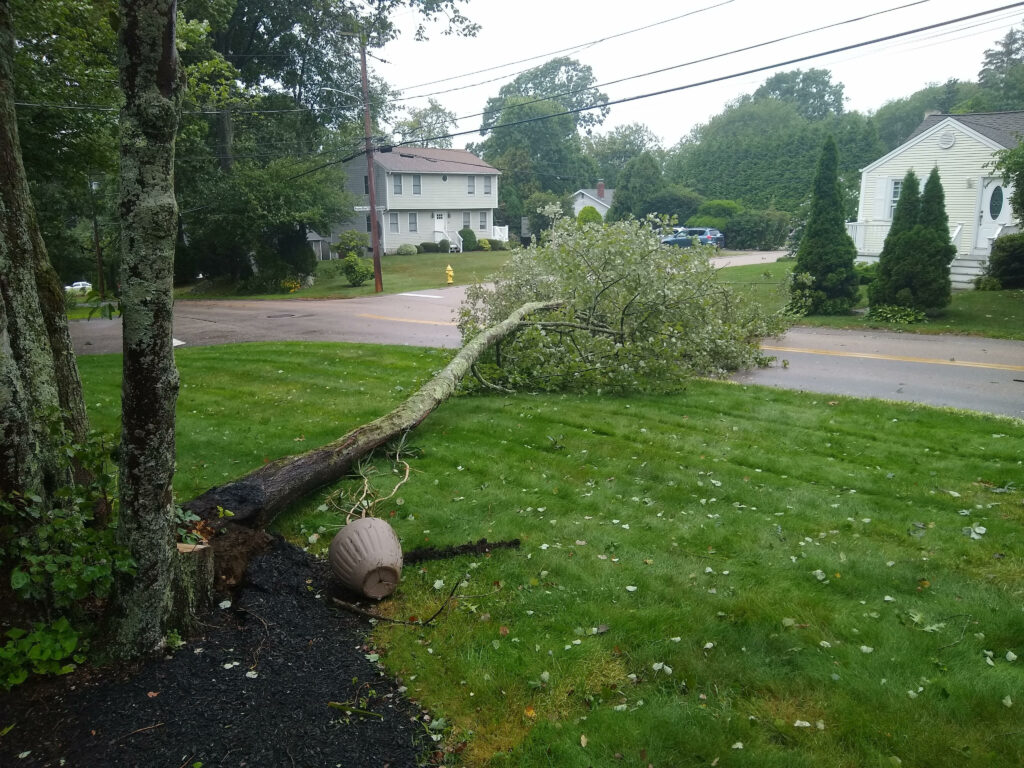 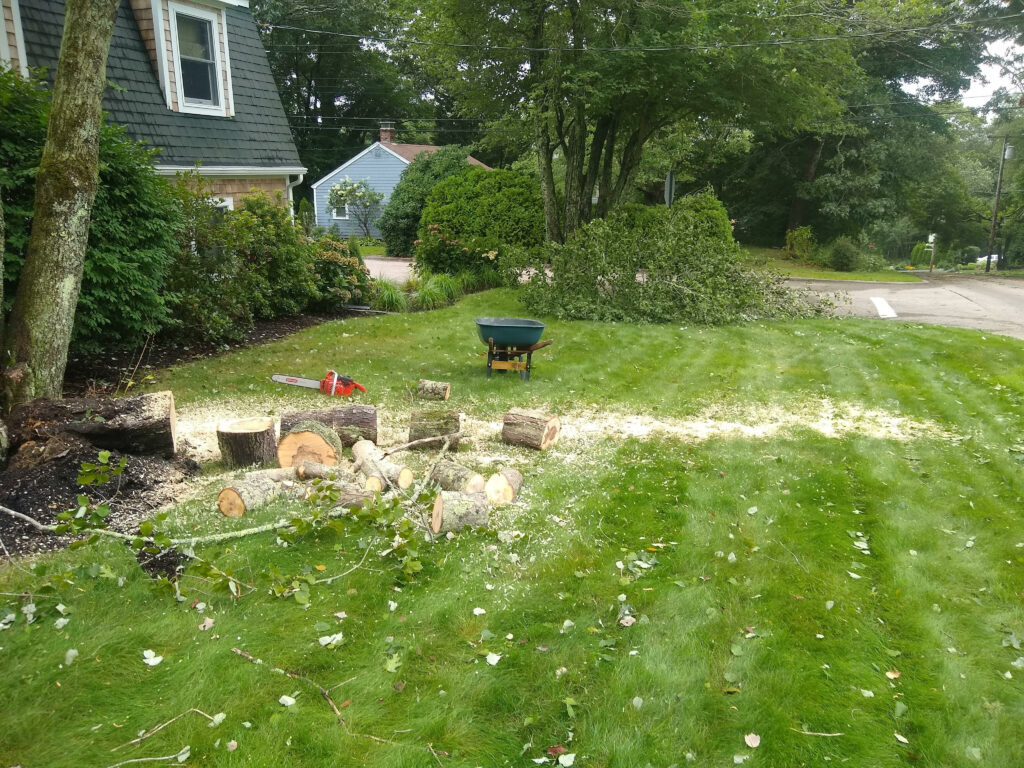 Matt in Nashville says his neighborhood had an issue this week:

It was a scorcher here in central Tennessee today, but after a couple of weeks off due to weather and Covid (no worries it was like having a cold thankfully), I was finally able to get back out there and sweat through the job – and my league shirt. While most of the grass looks great, there were some patches along the back that needed some special attention. Of the pics attached, my yard is the one looking green and ok, but the other yard pic is one a neighbor posted in the neighborhood Facebook page that my wife fortunately saw.

Apparently, Tennessee and surrounding states are seeing armyworms (they look like caterpillars) invade and eat the roots of people’s yards killing them almost overnight. I went out and purchased the product they were told to use (link below) and hopefully hit it in time – the couple of patches I saw looked very similar to her yard. PSA to all league members – be aware of threats to your hard work, and if you live in the Southeast or Midwest that apparently includes these little jerk worms. Any yard lost is one too many. 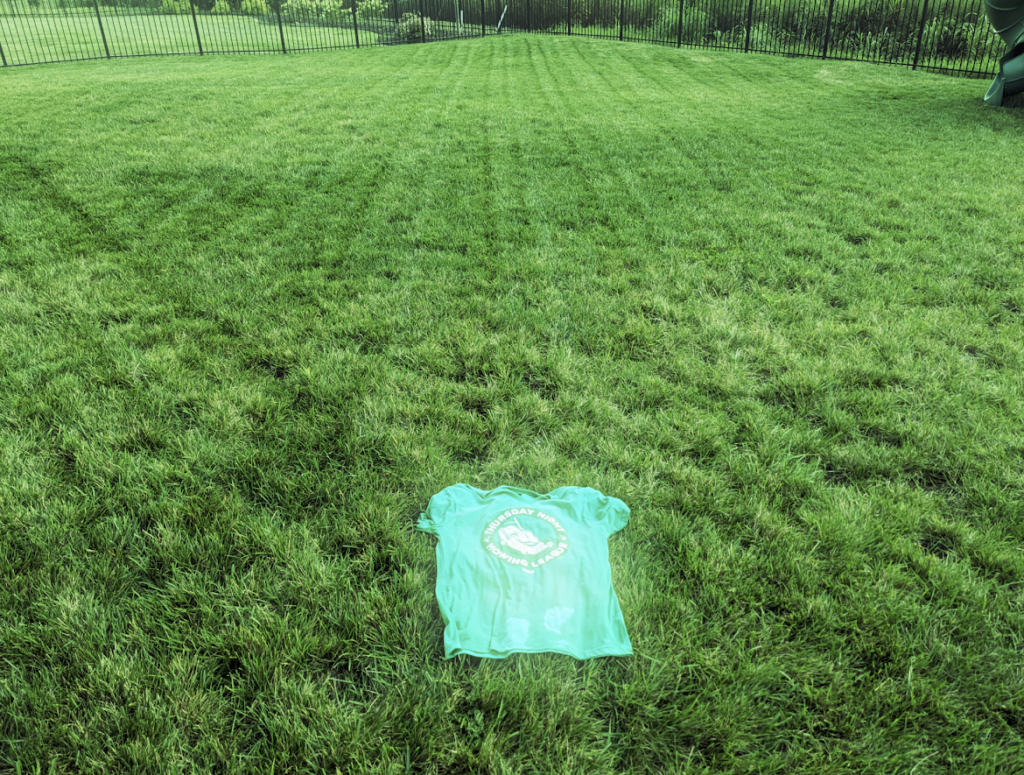 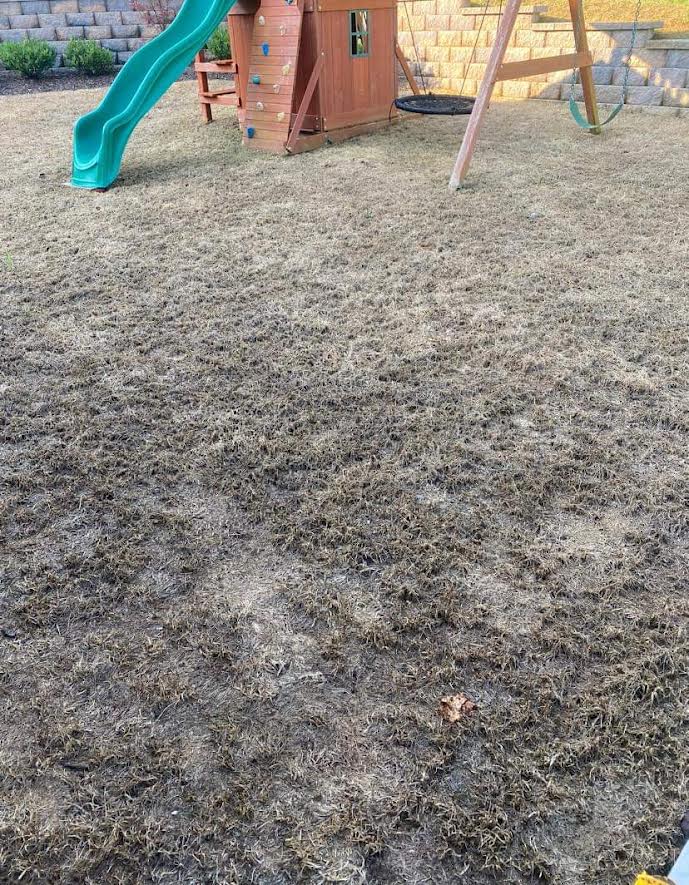 It’s DONE, Son! Thanks as always to @johndeere and @MillerLite pic.twitter.com/wubPW9Ubka

@OutKickTNML #TNML
Wore a green tie to work today in honor of this back to school cut. pic.twitter.com/X31yM2Gx5N

@OutKickTNML hasn’t rained a drop in almost two months but you’d never know it. In unrelated news, currently looking for side gig ideas to help with rising utility bills… pic.twitter.com/LKlczn6exK