Once again, you guys knocked it out of the park with your reports

There I was, sitting on the patio last night thinking we were headed for a quiet week for TNML. The messages weren’t rolling in like they had been the first two weeks. Had the buzz worn off? Were league members on vacation? Are members tired of taking pics of their mowers? All of those thoughts ran through my head until all of a sudden the floodgates opened up. The mowers were shut off. The blowers were done cleaning the driveways. Watering was finished up. The spikes came off, and the reports started flowing in from all across this great country…where it wasn’t a rainout.

I really enjoyed the quick report from Lyle Davis in South Carolina. He positioned his Kubota under a pecan tree to end the night and enjoyed a perfect June evening. The elitists out there just don’t understand what Lyle cooked up with that pic. They don’t understand the sense of pride he has for that yard and that pecan tree and the pride that runs through the rest of the TNML community.

OutKick thanks all of you for your participation and what we’re developing. As I like to say, who knows where this all goes. For now, we’re all off to enjoy that first weekend in June. Cheers.

No pic, but another successful Thursday night waxing. I changed up the cut lines and it needs a couple more go-overs for line definition.

More importantly, I know the TNML has gotten the support of my household. I came home and saw my wife working in the flower beds, which she has taken proud ownership of, and I advised her I was going inside to change so I could fire the mower up. She responded casually, but almost affectionately, “Oh, the mowing league”. That’s all I needed to hear to know that she even knows this is a thing. Great job starting the movement Joe!

I wanted to add that I would be in attendance for the Northwest Ohio TNML group get together if that came to fruition. My brother and I started a lawn mowing business when I was in 8th grade at the behest of our father. Some strict rules and regulations were instilled that I can’t break away from even to this day in my mid 40’s.

Paul K. says his marriage is better even if he’s not a full TNML member:

I’ve modified it slightly to Friday morning/lunch time, which works better with my work-from-home schedule, but this movement has helped my marriage. My wife would get mad when I mowed during weekend and she was stuck inside with kids threatening to hire a lawn service. LOL. What was I doing before? Rhetorical question. I laugh when I see neighbors out mowing mid-day on the weekends now.

Daryl K. sent the following email and needs a ruling:

Really wanted to mow the lawn today, but given the amount of rain we had experienced here in Indy over the last two days (including downpours today) I don’t think it is a good idea. What is the consensus of the TNML on rain? Specifically when is best to mow? I generally try to beat the rain, but am not an expert by any means!

Keep up the good work!!

Commissioner ruling: When in doubt, let it dry out a day and then raise the deck if necessary. Indy is blazing hot today so I wouldn’t waste time getting a mower on that yard or you’re about to spend the weekend playing catchup. The best time to mow is clearly Thursday nights, but this league was built on the theory that it’s your yard, you do you. I have guys sending pics on Sunday telling me they mowed. Some of these guys have big balls sending me mowing pics Monday morning and claiming they’re from the previous Thursday. It’s the Wild West out here.

Walked outside around 7:45 and it felt awesome down on the coastal plain of SC…Remembered the TNML….Got it done in under 45 and managed to take a pic under my favorite pecan tree with the cotton coming up in the field by the house. @JoeKinseyexp pic.twitter.com/r4zlv3OwY7

Rob in NC says he was "laying down nasties" tonight for #TNML pic.twitter.com/dcDGEToIKl

Game Day! Was worried about rain, but got the mowing in. Having a Mich Ultra out of our tap to celebrate. My wife and I had a discussion of what was more important – the yard or the beer afterwards. Might take more than one beer to solve that one 🙂 Thoughts?

– BTW, the TNML is a great idea! I really appreciate you doing this. I’m working on a few neighbors for upcoming weeks. My sister is coming up from Atlanta for the weekend or I would b joining you at Put-In-Bay June 19. 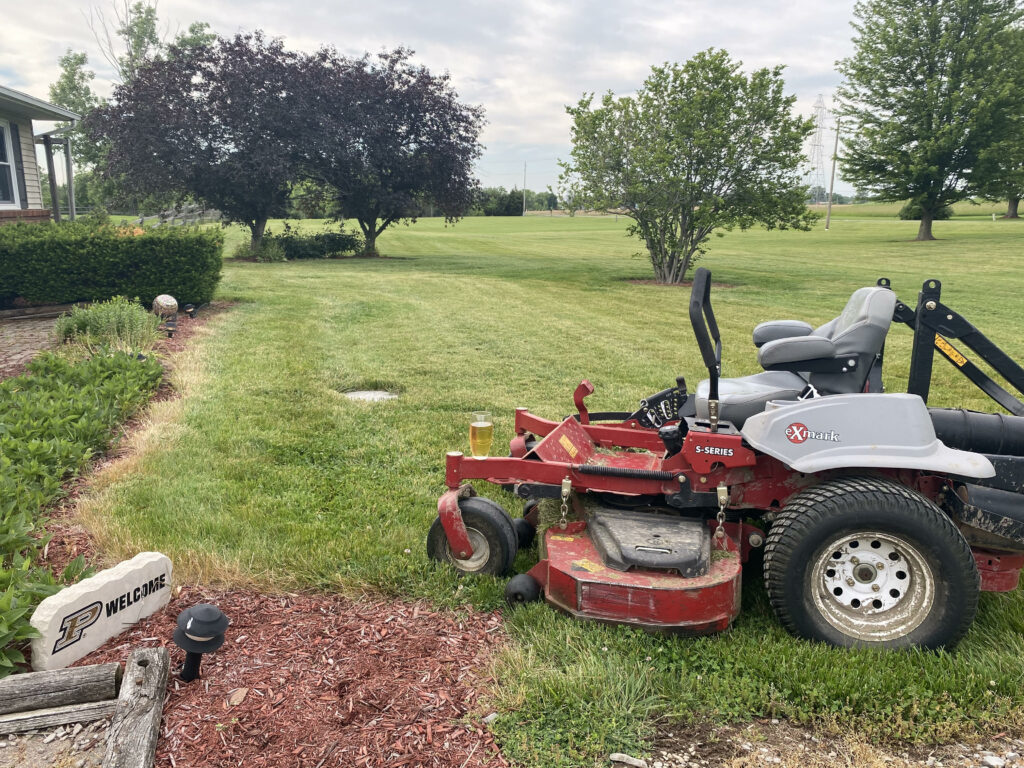 First night in the league. It feels great to be part of something bigger than you. 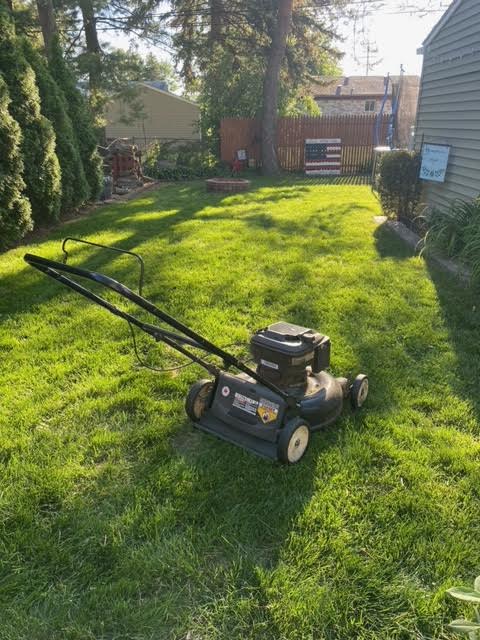 This is the view from center field deck (for kids Home Run Derby) although the cafe lights are in jeopardy as they get older and better. I have pitching duties but they have to chase the dingers! I still use the push mower which probably saved my life because I contemplated a riding mower and the weight probably would have sent me tumbling right down an old dry well (oh us get tea 10ft!) that wasn’t properly sealed. Whatever they used had before topping off with dirt had rotted out and my foot went right through! So I’m sticking with push mower… 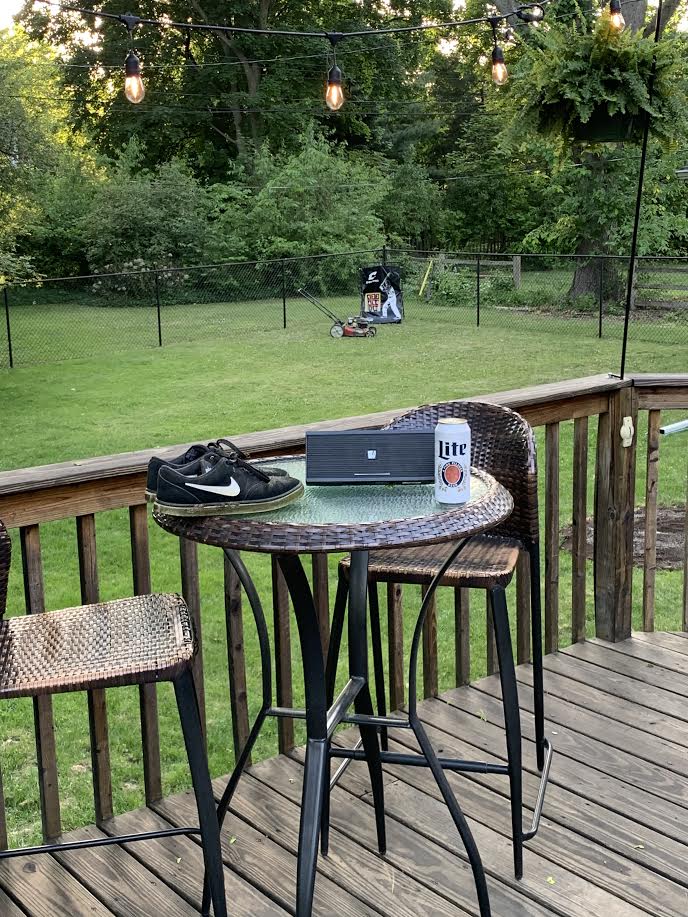 Ryan S. checks in with his old school Scotts manual mower. Look at the depth of that cut! pic.twitter.com/asAWAgPMXA

Marshall in the Texas panhandle: 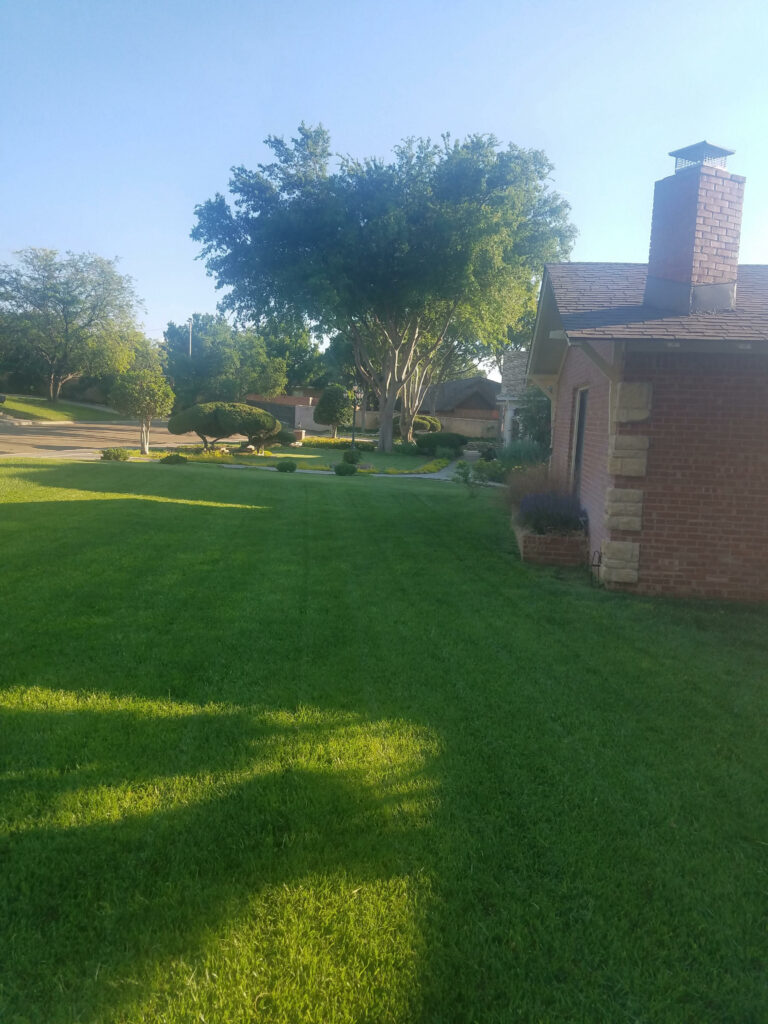 @JoeKinseyexp just got in the TNML prior to the rain. Nearly had a causalty but my girls came to the rescue quickly to stop the bleeding. pic.twitter.com/dGAFg8YNeo

Cleaned up the old John Deere for a potential TNML picture or emergency liquor store run if my wife takes my truck keys! 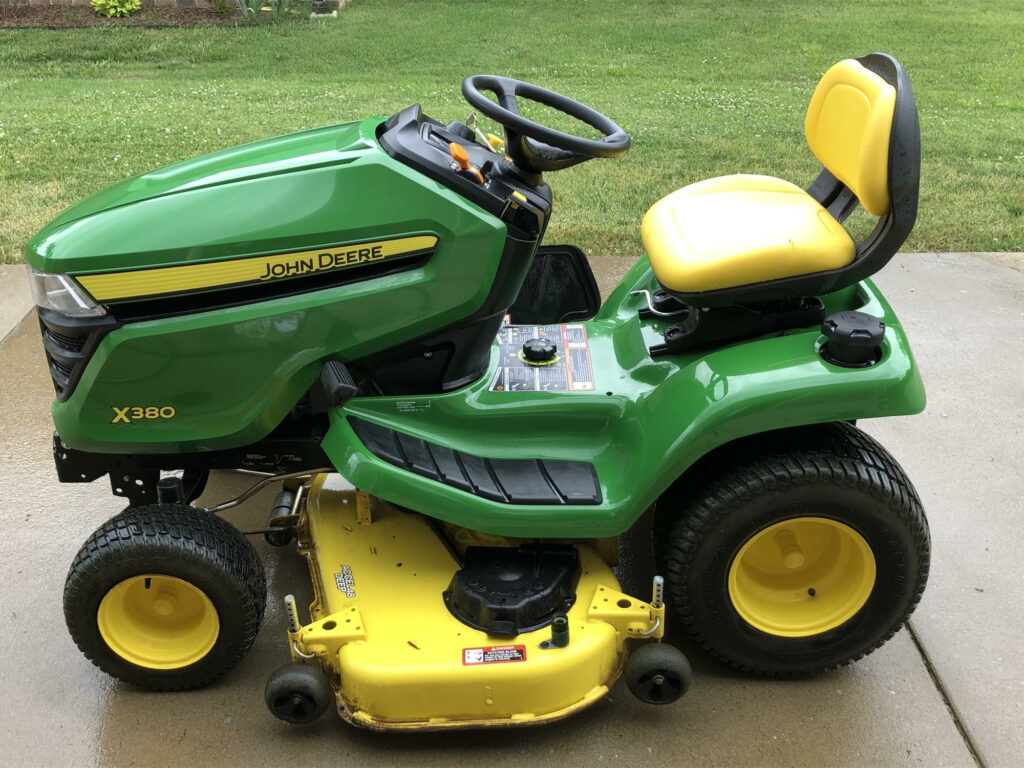 Rained out but took advantage of Mon off work and got a good cross cut. Cut again on Sun and then back on schedule #TNML pic.twitter.com/TqGn3V2Xv8

Just got done front and back at 1430 hrs. Had to go early to beat the heat . And yes the temp is correct. Have a great weekend.

@JoeKinseyexp Had to retire a pair of lawn shoes this week after the air max fell off, sad day. Also after reading today’s screen caps thought I’d share the trophies we play for in “The Cruiser Cup” on our backyard golf greens. My brother @Wolftrout81 does the engraving. #tnml pic.twitter.com/d9Pijnj4wX

Only second mow with the new mower. First night with the new trimmer. I’ll get better. And yes the fire pit could use some work but for $250 at Menards, you get what you pay for. 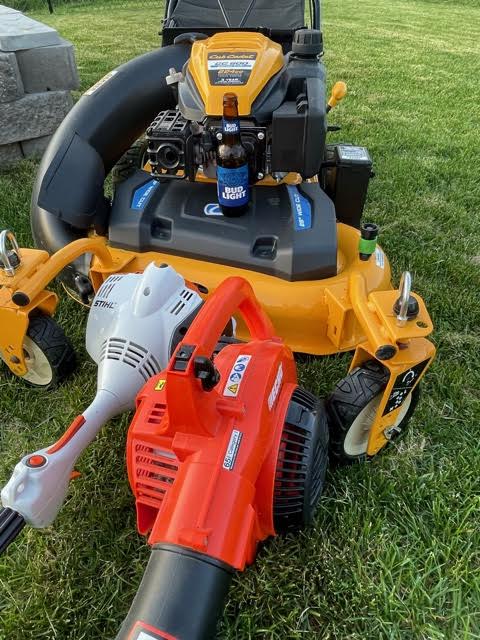 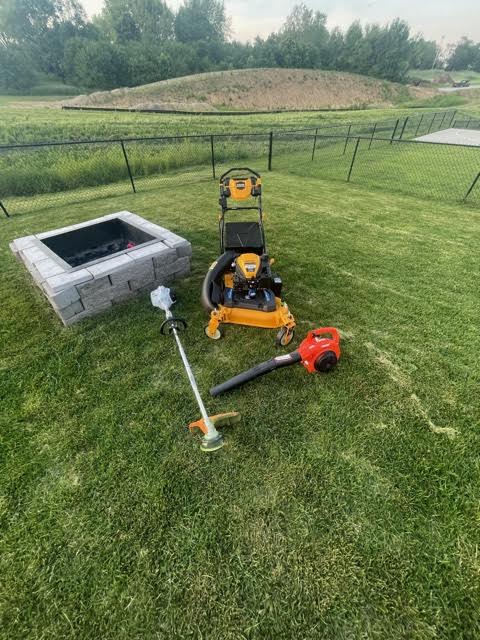 Since I’ve been neglecting MY yard while caring for others, I was left with this mess……but a few DaddyPops and a 26 year old #Briggs&Stratton powered Frankenrider later, all good! 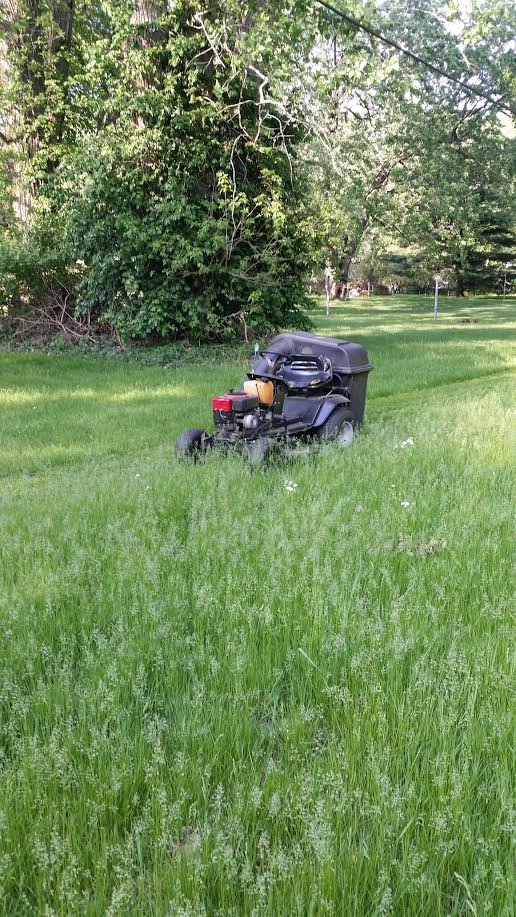 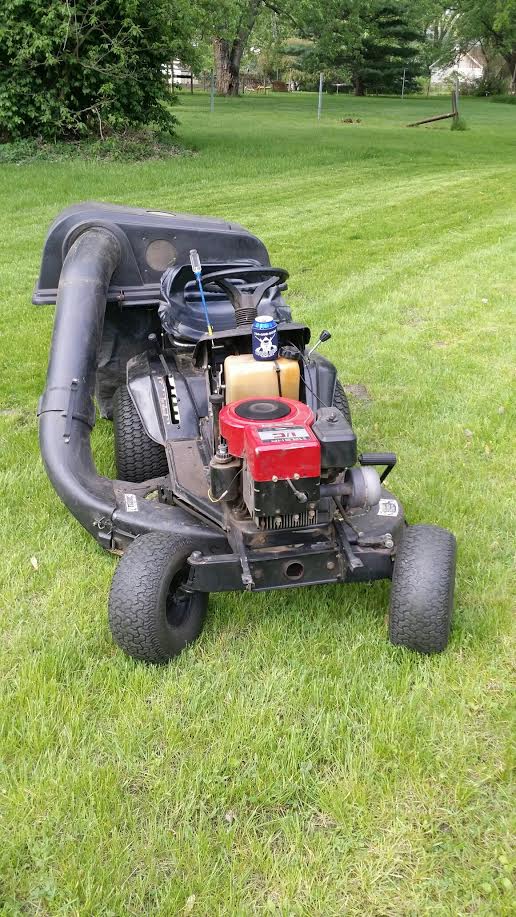 I was seriously concerned about missing the TNML tonight because I had to work late. I arrived home well after sundown to find that my wife is all in on the TNML and knocked the entire yard out for me! What a gal! Now I find myself standing on the padio at midnight in only my underpants and a smile, snapping a picture to send in even though  the sprinklers have already kicked on and hoping I didn’t miss the deadline. Mid 80’s in Cache Valley, Utah this week and I’m loving it! 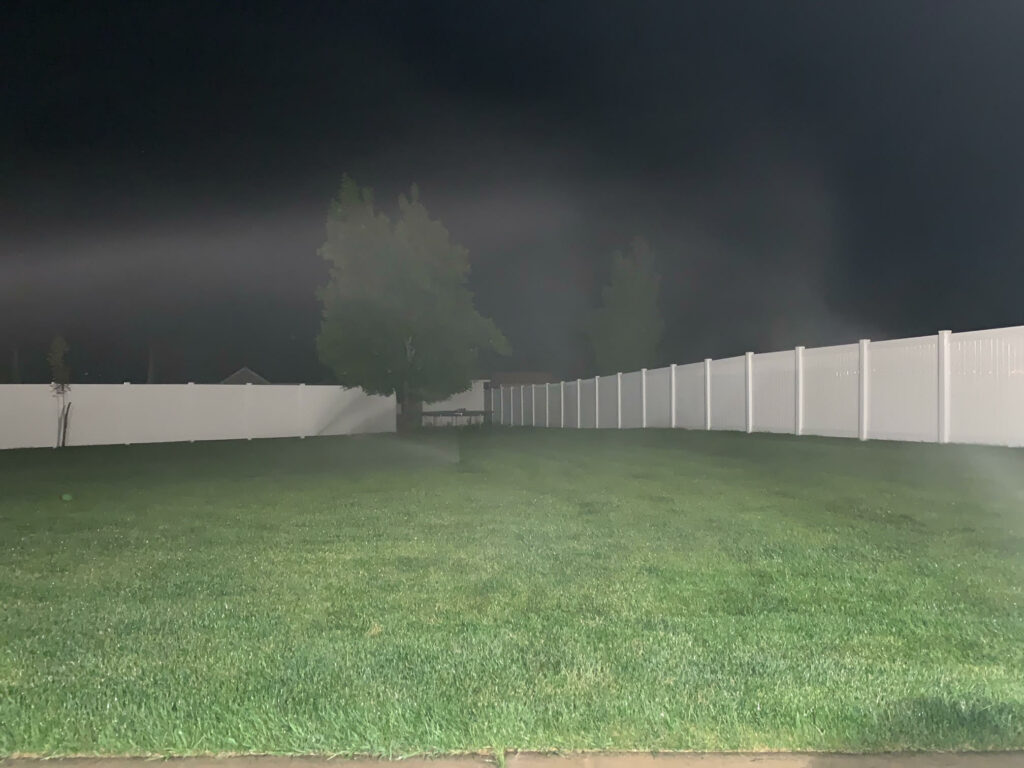 Meant to send early but got sidetracked wayne pic.twitter.com/9OLBU4XMKd

Still waiting for my sprinkler guy to come out, so the yard isn’t as green as it should be. I use old Nike shoes in case I step in dog crap I didn’t catch. I figure that’s what Nike deserves. Grey doesn’t show up as dirty but I wore a nice hole in them over the last few summers. 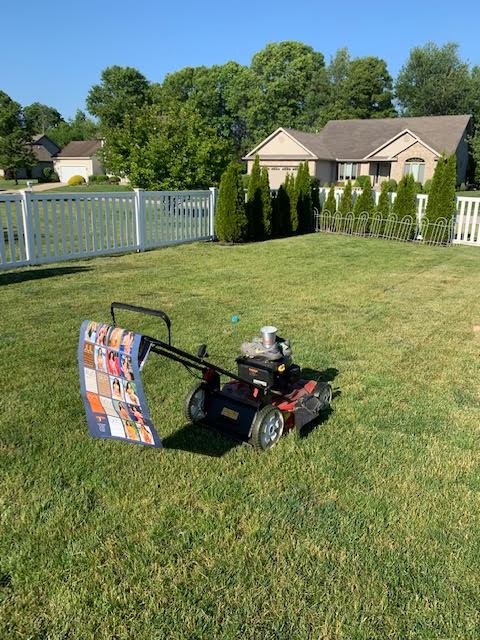 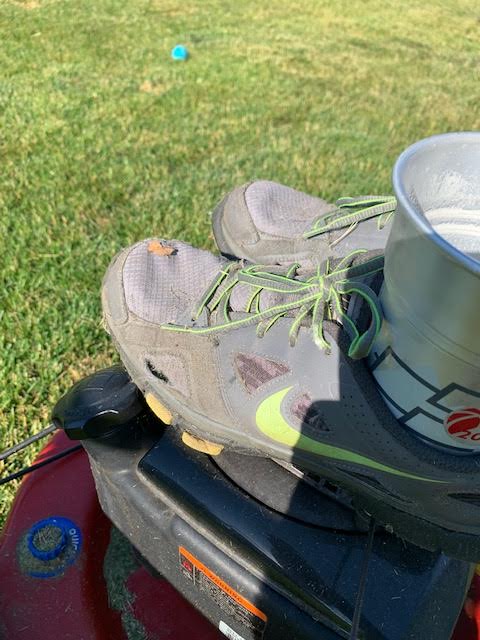 Love what you are doing on a daily basis!  Found you for the first time on Outkick and you are a great escape from all the BS in the world.  Love the Midwest, and every day average American Male content!

Speaking of which, attached is my submission for TNML.  This tractor is what my 91 year old father saved for while serving during the Korean War.  (All his buddies spent their allotment on booze, my Dad saved for this tractor….)  It made him proud that I bought this mower to pull behind it to mow CRP strips.  This will help us hopefully shoot some pheasants this winter.

Hopefully the league commissioner will allow this submission to TNML. 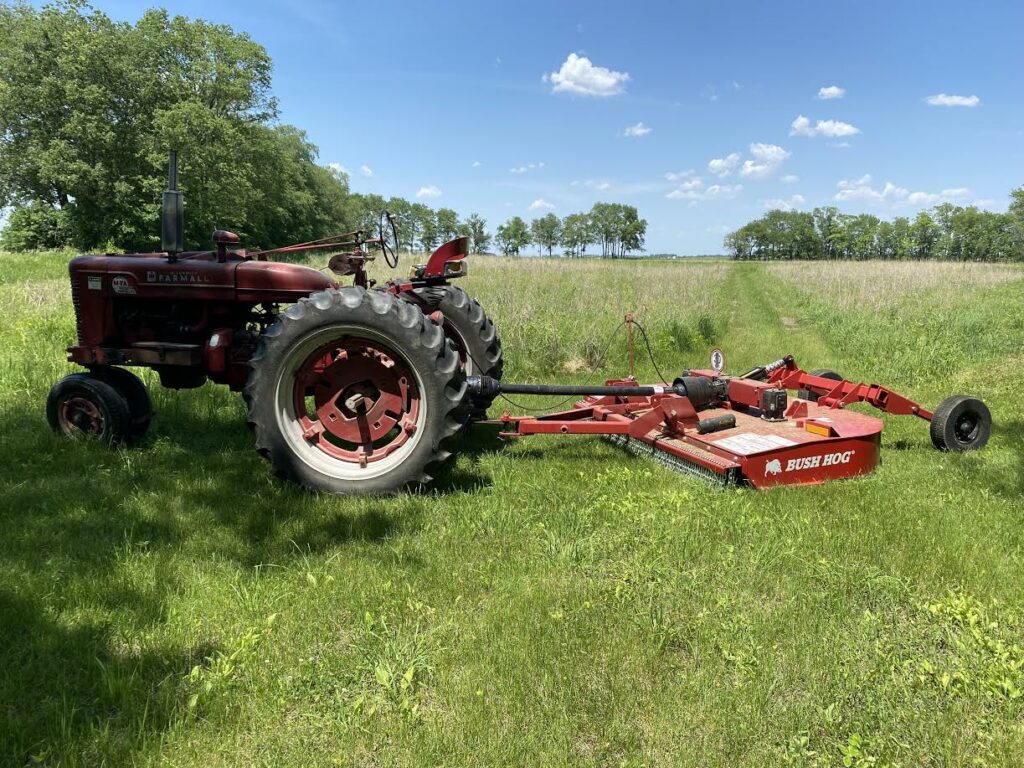 Reporting from Kennesaw GA. Hard to get good pics of my lawn because my lot is shaped like a slice of pizza and is mostly on a 45 degree angle.

And yes, I use a battery powered mower and I love it! pic.twitter.com/hK1CHzq6bc

Toro 30” time-master walk behind with toro roller kit …fert is subbed out to a local guy who doesn’t water down his product ..burn spots from my damn dogs but they look innocent so it’s okay pic.twitter.com/daZTdWQX2X

My dad cut a drone landing spot into the grass at Brookville Rental in Brookville, OH where he delivers heavy equipment to job sites. Attn Amazon and CareFlight: 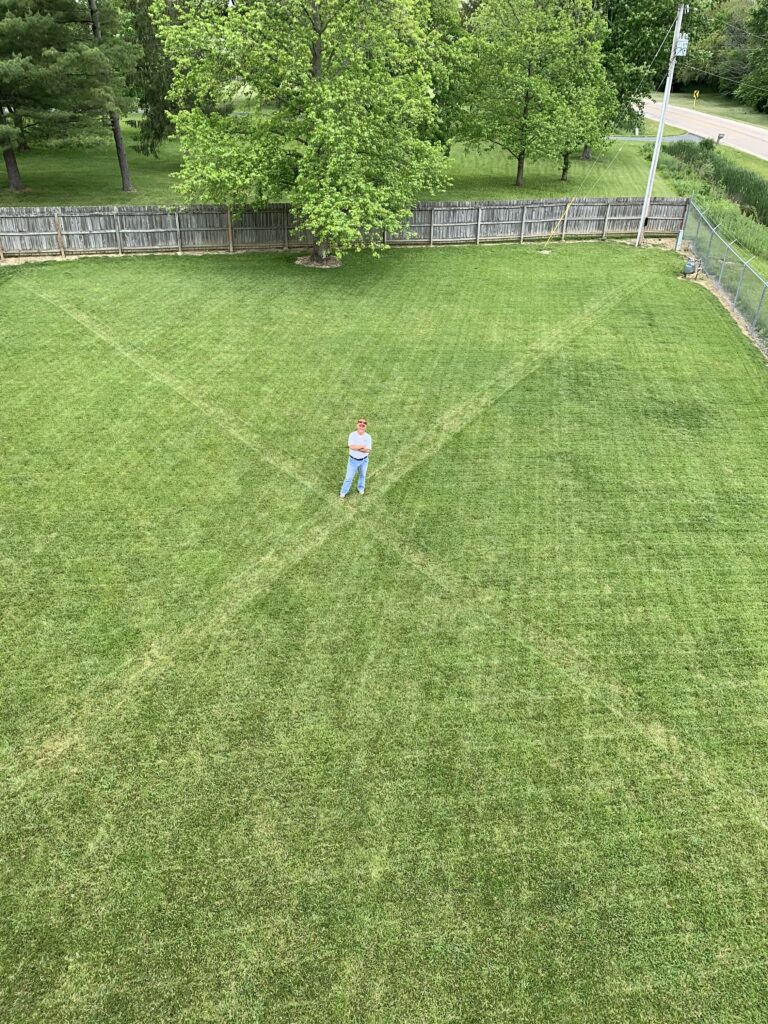 A little late to the party but was wondering if I can be an honorary member of TNML this week? Right to left diagonal after a rainy week!! https://t.co/MmSkm4R9V3 pic.twitter.com/nmPHiHwNko

Just a little input from the deep south.  Mowing is practically a year-round chore in the deep south, so you may not get as much buy-in from Gulf Coast/Florida residents. I think it has to be about more than mowing.

Yearly mulching is something of a Spring/beginning of summer event in my parts. Gotta get the kids involved too. 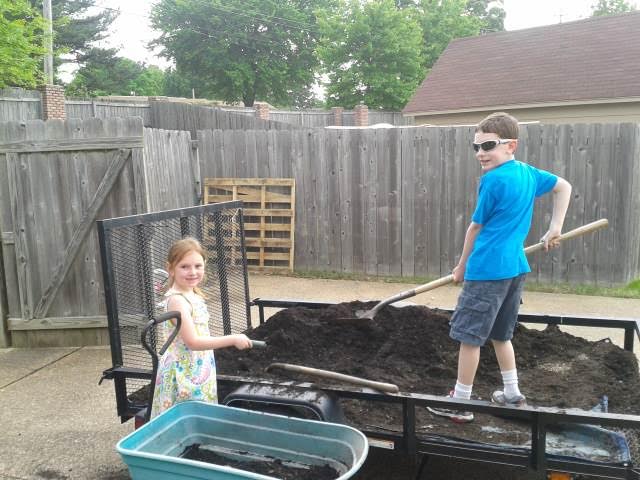 Please accept my inaugural entry into the league. It took place on Friday (last week), but please excuse that slight discrepancy, the new schedule manager (our 3 month old baby girl) dictated that Thursday was out. I managed to fight through a 15 minute rain delay on an otherwise nice evening (hasn’t rained in two weeks and was 90+ degrees every day this week) to get it done. The commercial Toro performed well in the adverse conditions. I hope I’ll also receive bonus points for the Spotted Cow while being in Georgia.

My wife says I have gotten far too excited about the league, but I think you’ve got on a gold mine. Keep up the great work! 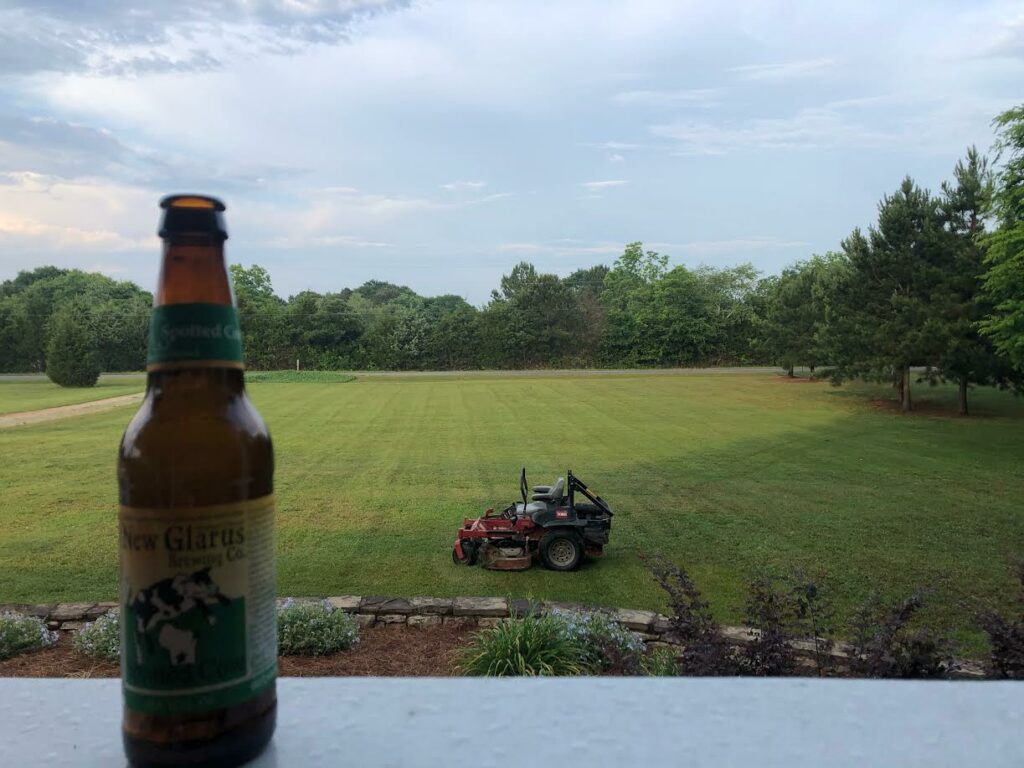 I missed this one last week from Chris F., but I wanted to make sure it made it this week:

Checking in from Woodbine, Maryland.  Fantastic weather this week and the longer days allowed this 5 tool player to get in 18 holes this afternoon and then hit for the cycle this evening.  Photo attached for reference.  Now we’re all ready for the holiday weekend! 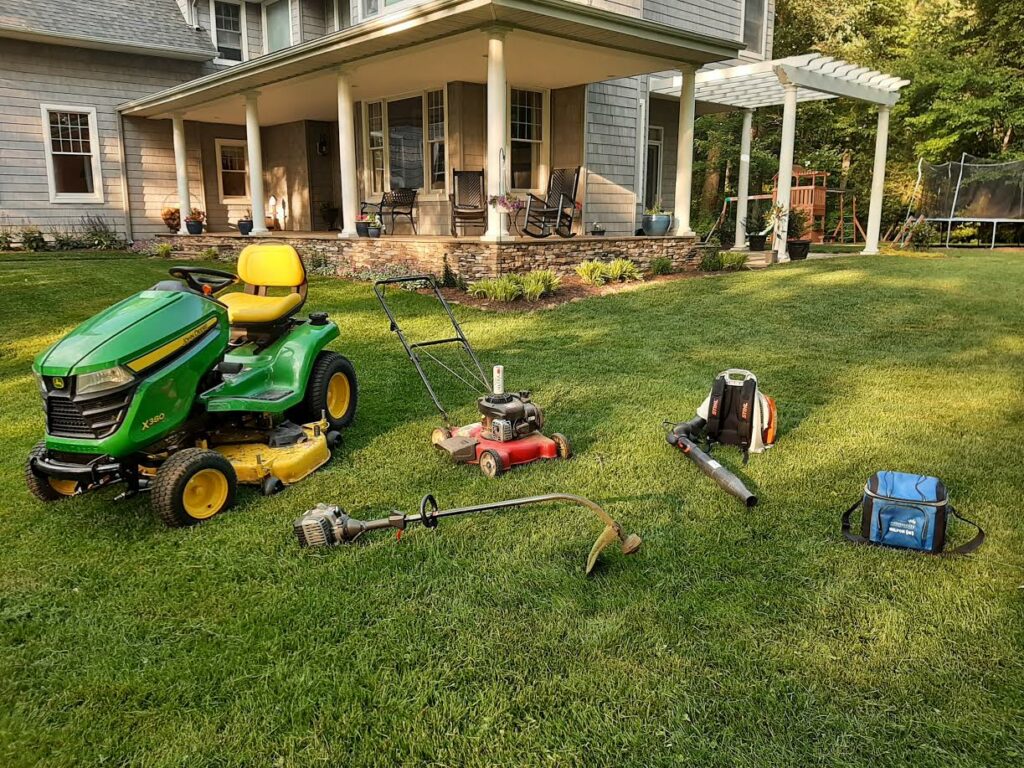