You guys are absolutely KILLING IT with the Thursday Night Mowing League reports, unless you’re Bears fan Allen Olds who is dealing with his wife killing most of the front yard with weed killer clearly on PEDs. I’m getting reports of neighbors joining in on the fun and coordinating cuts for TNML MVP points. I heard from guys in Texas who are battling their way back from heavy rains in the Houston area and Philly Kev up there in Minnesota where a cold front came through and had windchills in the 30s.

I’m hearing from those of you getting ready for The Memorial golf tournament (starts next week, but Dublin homeowners mean business), the Indy 500, graduation parties, and those who just want to make sure there are fresh lines for that long holiday weekend filled with patio beers, floating in the pool beers and all that comes with the official start of summer.

The passion you guys have for this project isn’t going unnoticed. I’ve said it now for two weeks: I have no idea where this all goes, but it sure is nice to have some innocent fun with TNML. No joke, the pics being sent in are lowering blood pressures across this country. I haven’t noticed a single tweet war via TNML content. There’s probably some doctor out there who can tell me what pics of freshly cut grass do to the brain and pop off some scientific terms. I’ll just say it’s peaceful. That’s how my non-scientific, Ohio brain will define all of this.

Hopefully it’s doing the same for you.

• I knew there were a bunch of Ohio followers out there, but I didn’t realize the level of interest here in area code 419. If this keeps up, I’m going to be forced into holding a TNML meeting at a brewery to talk mowers. Life. Sports. I do have a longtime supporter/friend who is the 419 Stihl rep. The only issue with Mark is that he’s been pimping Stihls iRobot mower thing. I don’t want him converting any TNML members.

• Indiana and Utah continue to come on strong. Most of my time in Utah has been spent in Moab where you don’t exactly need a mower, so it was a little bit of shock at first when the Utah mowing reports came in. As for Indiana, it might as well be Ohio with a self-indulgent Catholic school up on the northern border. The Hoosiers know the value of a beautiful cut, and I appreciate that about them.

• My buddy Diesel in Temperance, MI is always bragging about his edges. He talks about his lines more than golf. He’ll get all excited if you hit this post with likes.

@JoeKinseyexp Thursday Night Edge pics for you! So clean and straight! pic.twitter.com/EKsRqkqWqJ

• Paul B. in Bethlehem, PA emails: “My neighbor and myself love Thursday night mowing league….will send pics after this dry spell ends..we are baking in Eastern PA and need rain.  Our lawns are not worthy of pics at moment. We live by one rule on cutting: When in doubt, cut!….this results in 2-day cuts during peak cutting season. Great columns …great work …took the fam out to eat post cut …and stumbled upon a live duo locked in on yacht rock!   That with pending rain kicks off a great Memorial Day Weekend.”

• Once again, enjoy that long weekend and whatever you get into. I appreciate all the support for what we’re doing here.

@JoeKinseyexp Finished during a break in the weather. 80+yo neighbor asked if I could help him out. No pattern due to miserable weather & double headers are a grind. #TNML pic.twitter.com/fS5TLdZ1af

MVP Candidates for Thursday, May 27:

Jonathan Mayo for doing it up for his son and all the dads who are about to see his fresh lines. And Steve Mrak for coordinating with his neighbor for one helluva 1-2 punch heading into MDW. Congrats, fellas!

Tonight’s lawn work is special @JoeKinseyexp
My son graduates HS on Friday night and his Open House is Sunday. Beat the storms and cold front. 80 degrees in Avon, IN (minutes from THE Indianapolis Motor Speedway).#TNML #SunKing #Indy500#Classof2021 pic.twitter.com/P8y4ZxL9hg

Is there a neighbor doubles league? pic.twitter.com/YKTTlFqWkS

Took one for the team today! Wind chill factor of 36 in NE #Minnesota Happy to get the 2nd diagonal cut done today; horizontal cut next week to complete the 1st cycle of the season. Enjoying 17-7 Pale Ale from @cdangerbrewer while listening to the new #EricChurch album! Cheers! pic.twitter.com/oaRkldd5T9

Son and I worked to prep the yard for Memorial Day tonight. #tnml pic.twitter.com/bYSs8p4kFm

Perfect weather here in Cincy for TNML. Shaved it a little closer today in Honor of our Brothers and Sisters that paid the ultimate sacrifice to allow us to have the freedoms we enjoy this weekend and 365 days a year. 🇺🇸💪 pic.twitter.com/rb796csKiZ 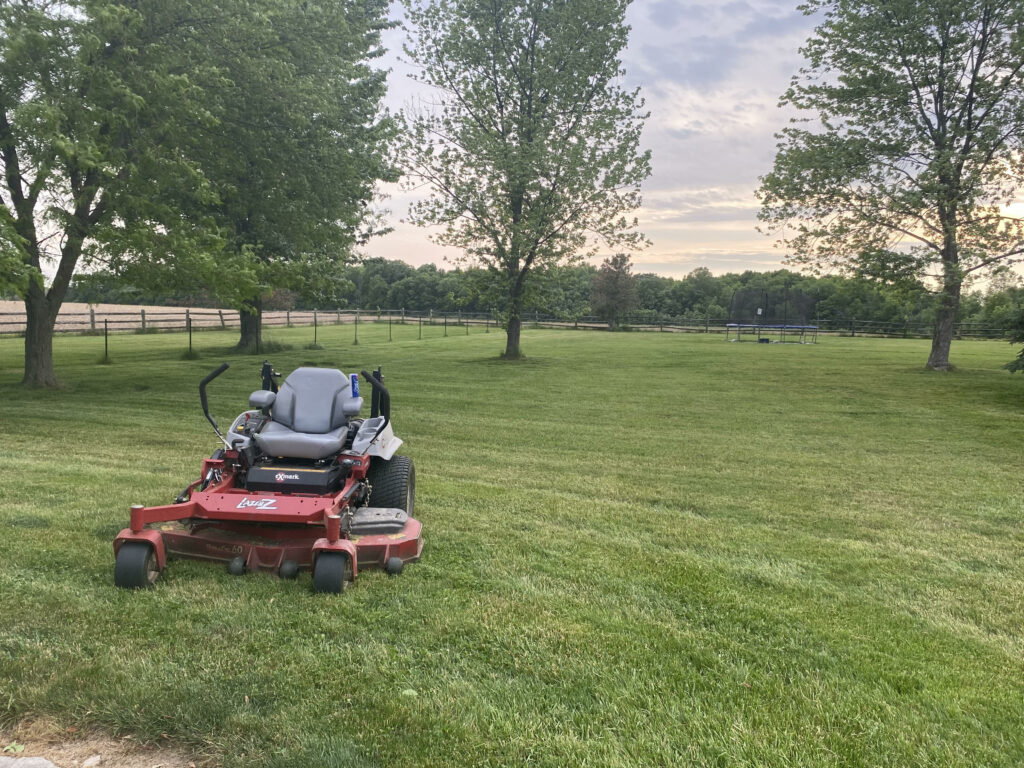 Kurtis J. in Toledo writes: “Those lines don’t make themselves! It is like I took the front lawn to get a Brazilian wax and asked to keep some landing strips.” 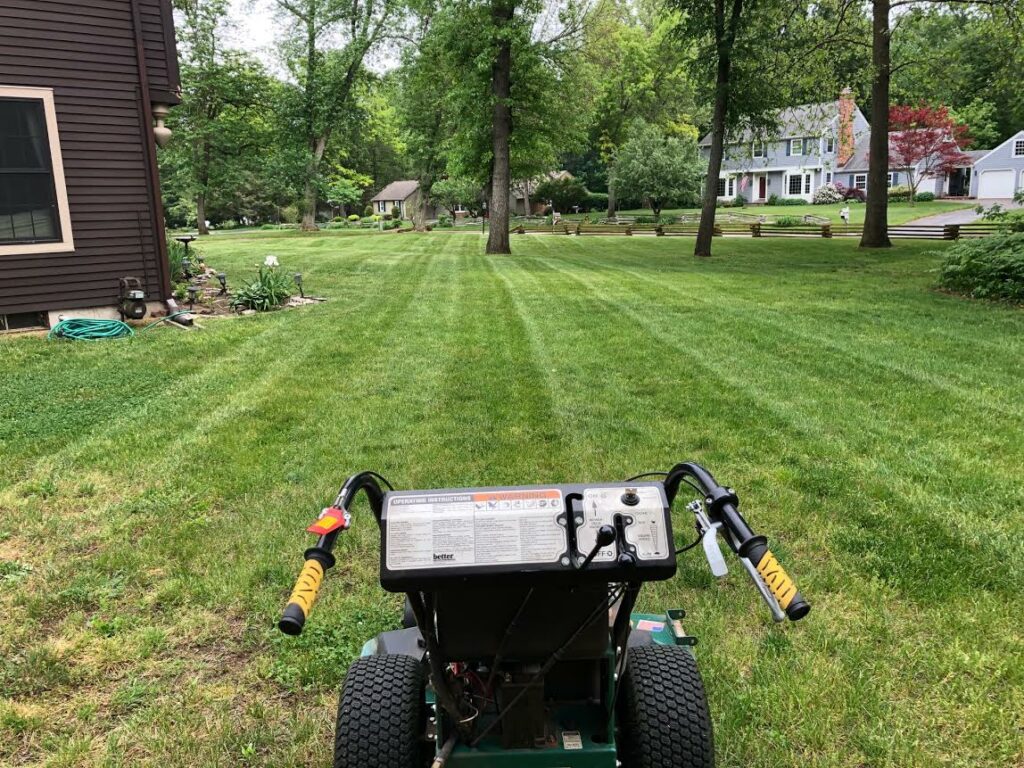 Dave S. reports: “How about this for a two for one? The neighbor kid doesn’t even know he’s in the TNML. Welcome young man. Welcome.” 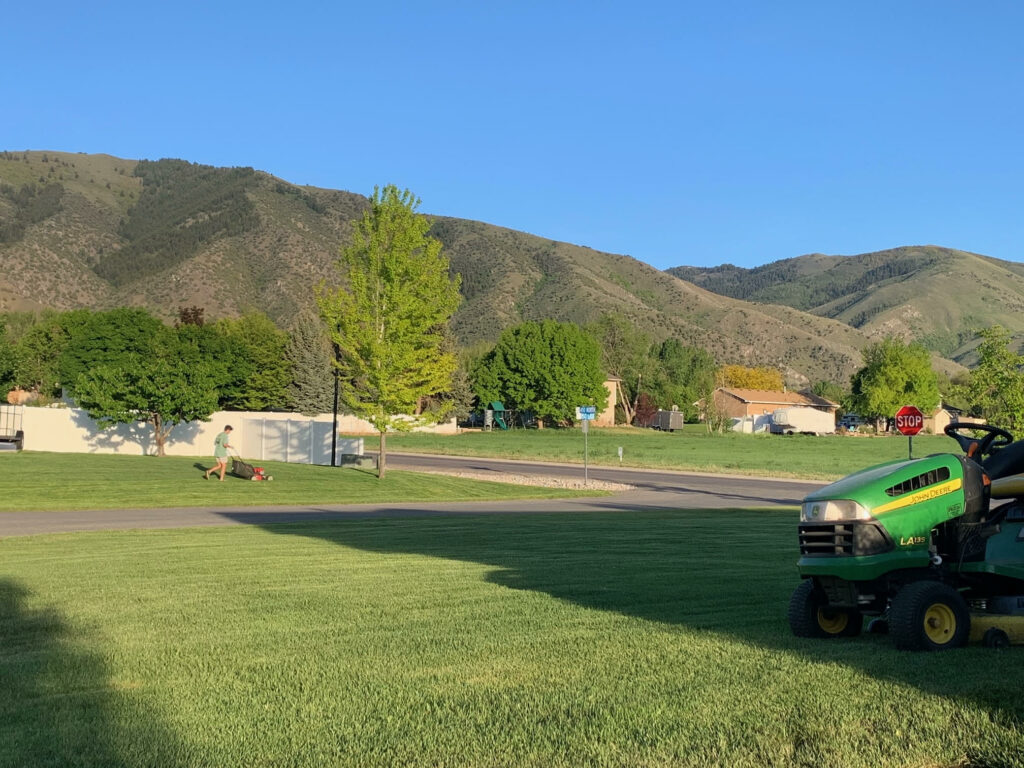 So got my #ThursdayNightMowingLeague cut in this evening

Hoping this pushes me up the standings @JoeKinseyexp @Outkick pic.twitter.com/EtcM8scA81

League was moved up to Wednesday in our hood because of weather. pic.twitter.com/AupG6vdMKi

Matthew R. in Whitestown, Indiana writes: “Need a ruling, are grey shoes allowed for mowing or do I need to upgrade a nice pair of white New Balance?”

Commish reponds: There appears to be plenty of green mixing in with the original shoe color for outsiders to understand that you’re all about that lawn life. Grey shoes are fine, Matthew. 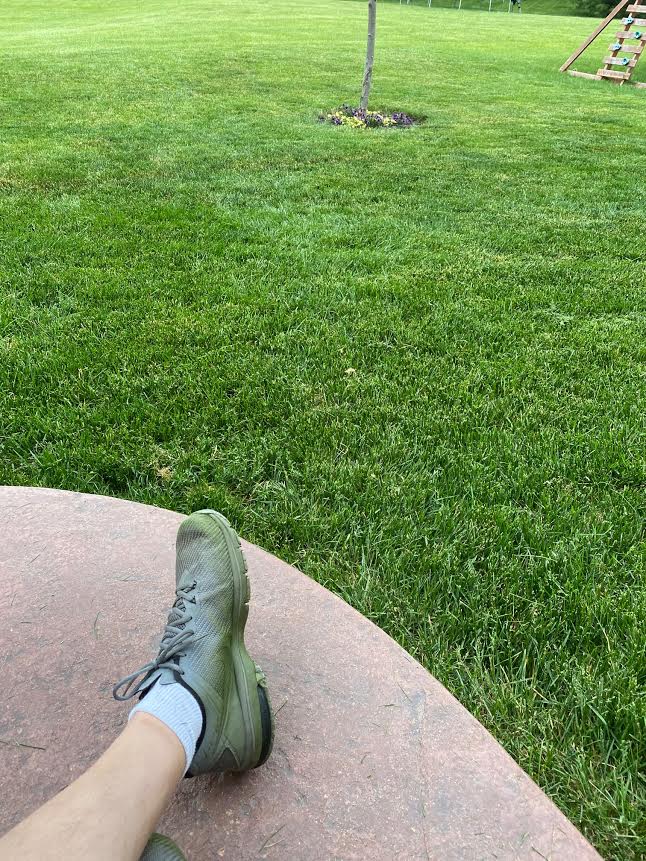 @JoeKinseyexp during back and enjoying the view. A good Thursday evening. pic.twitter.com/q5yxFEwGxQ

Barely beat the rain in St. Louis. The washers pits should be dried out by Saturday and ready for the tournament. Big weekend on the circuit! pic.twitter.com/CcXu0SuLoP

Daryl K. checks in: “Really enjoy all that you are doing! Am a Midwestern plant (born and raised in Denver, Co) making it work in Indianapolis, In. If you do make that trip to Carmel, IN you mentioned last week, let me know! Wife does all of the flowers and I handle the mowing and mulch duties. We love our little slice of life! 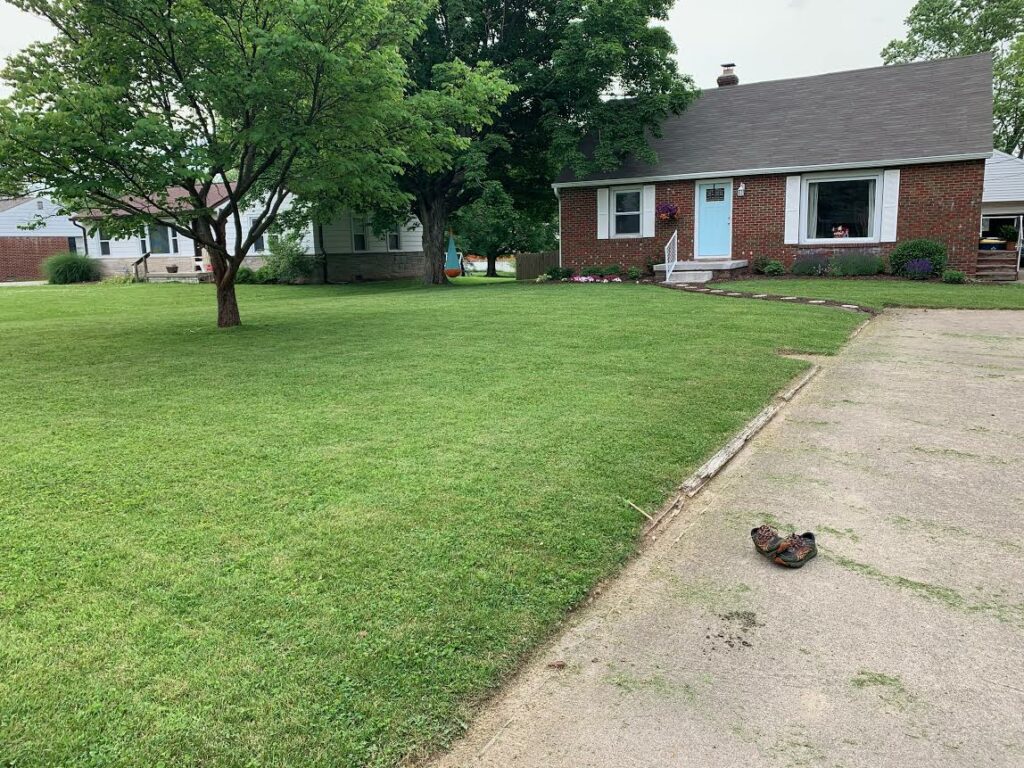 @JoeKinseyexp Got a proper Thursday evening cut in as the sunset bathed the Wasatch Range in Kaysville, Utah. #TNML @Outkick pic.twitter.com/dHci9pyAUx

Let the wife spray the yard. Apparently she mixed the weed killer a little strong. Yard is on the mend though. Hopefully I won't be the laughing stock of the neighborhood in a couple months! pic.twitter.com/O2y5JBOQRK

Scag 1 – copperhead 0. Evidently it thought my mower deck was a safe place to escape to. Didn’t work out so well for him pic.twitter.com/OOyJiWrDDG

Sunshine but humid in the upper 80s after 2 weeks of rain in Texas. Yard was so thick I had to make 2 runs, missed a few landmines from the dogs, and chased out a snake. Enjoying it now with a Captain Dynamite IPA from VooDoo Ranger. Toro still strong after 20 yrs. pic.twitter.com/UKx6XHnJWQ

Beau in Toledo texted: “Another Thursday, another yard; one of 4 I do a week. This one is my girlfriend’s house. Bought this mower a few weeks ago… gonna buy another for my house!” 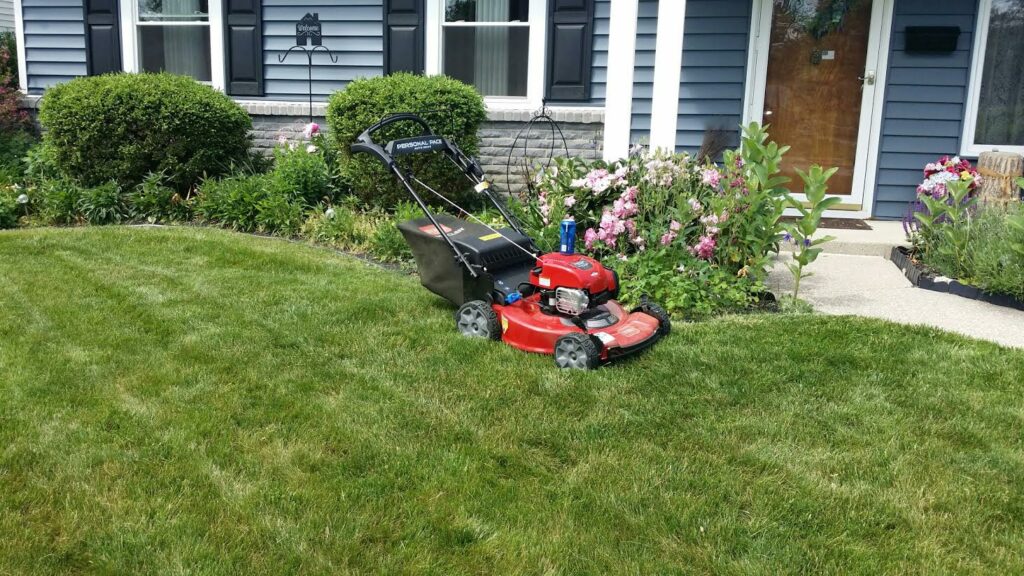 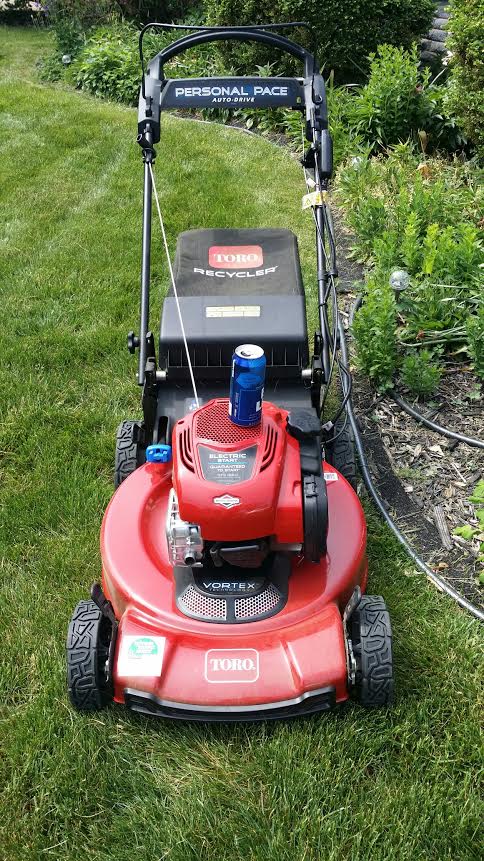 Thanks to help from @SylvaniaMower for this new bad boy I was able to go diagonal even dropped deck a level to cross hatch with no issues! #thursdaymows pic.twitter.com/zWBEBLi7w4