That feeling of “This is work” is creeping into your brain. You start to think that mowing Saturday makes more sense. DON’T LET THOSE THOUGHTS CREEP INTO YOUR HEAD. YOU MUST REMAIN STRONG WITH SEPTEMBER ON THE HORIZON.

I’ll admit that mowing didn’t feel as great last night. I’m still super sore from my canoe trip because I prefer to float down the river for miles and collide with rocks. I know the bruises are coming, but I keep doing it year after year. By Tuesday, the bruises started showing up. My body was battered. The 45-holes of golf over 24 hours, the booze and refusing to get into the canoe caught up to me this week. I spent more time on the couch than usual, but I GOT MY ASS OFF THE COUCH, SUCKED IT UP AND TRUDGED ON.

The turf is looking amazing. Raising the deck to 3 1/2″ has been a game-changer, especially for areas of my yard that were constantly dried out. I’m talking take off your shoes and bury the feet into the grass turf right now. I told my wife this morning that the yard makes me want to get a 7-iron out of my golf bag and practice shots that I hit at least 30 times per round. The U.S. Open groundskeepers will be sliding into my DMs for secrets, it’s that lush and perfect.

…moving along…I brought in my friend Diesel to be the first-ever honorary TNML starter. This is a program I’d like to expand, so if you’d like to become an honorary starter, send me a message and I can explain the process. It’s simple, you say what Diesel says here, but I think instead of “engines” we’re going to go with “mowers.”

Thank you to league member @DieselRenius for waving the green flag this week 👍🇺🇸 pic.twitter.com/s7TW389C2R

• I received word from Maxx (yes, with two Xs) this week that there were supposed to be conversations with a possible beer sponsor. Fingers crossed on that front. I’d love nothing more than to lock in this sponsor for weekly MVP prizes.

• And finally this week, I’m supposed to run into Dana B.’s husband tonight at the Wiffleball tournament I’m headed to. It’ll be nice to see the TNML colors flying in tiny Wren, OH. As you guys know, I’m all about small-town America and everything it represents to a country that has forgotten those who are the backbone of the USA.

I’m pumped to get out amongst the cornfields to see those classic Ohio yards mowed to perfection. I might have to stop the car and get some photos.

I feeling like the summer is definitely winding down, especially with the way the yard is looking. But, at least I can look forward to September and October for cooler temps and greener grass. I took TNML literal this week and finished at dark, it was cooler. Chose the old-school weapon which was my first, since tonight I got my first TNML follower.

But enough about me, I’ve been hounding my neighbor for months to get involved in the movement. He had a dilemma, mow his grass on Thursday and be so sore that he’d be worthless for Thursday night golf league or mow a different day.

Well today, I’d like to welcome my neighbor Eric W as a first-timer to the TNML. Today he sacrificed life and limb and mowed before golf, finished up in time to again risk his life for the rooftop pic. 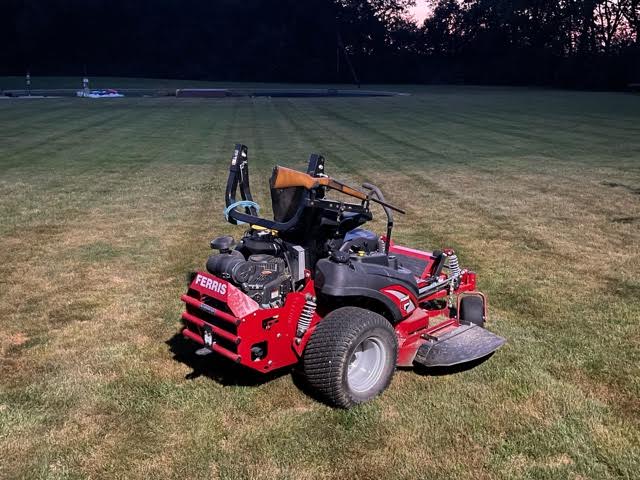 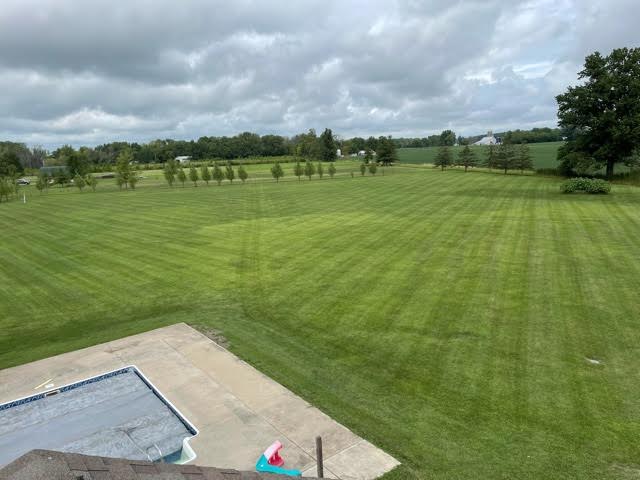 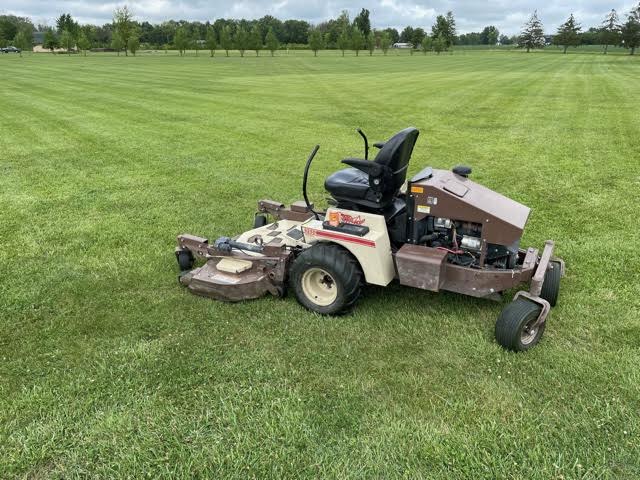 Beau in Toledo has a special report this week:

Layin’ down Sunset Stripes for the #TNML on 19 Aug 2021. Had to get it in, and not just for League Night. Why the Date addition?

This week’s League Night fell on the Anniversary of my Last Single Saturday Night, the night of my First Date with My Lady of 15 Years now. Yes, League Ladies, she got the flowers and the giggle/weepy card before i fired up the Briggs&Stratton. Priorities and all.

She prefers a myriad of colors over just roses, so to all the haters, She got what she likes! 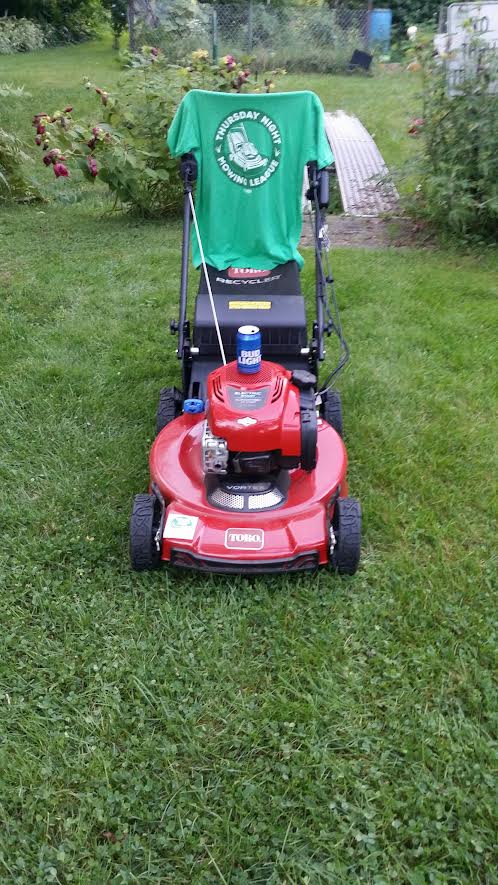 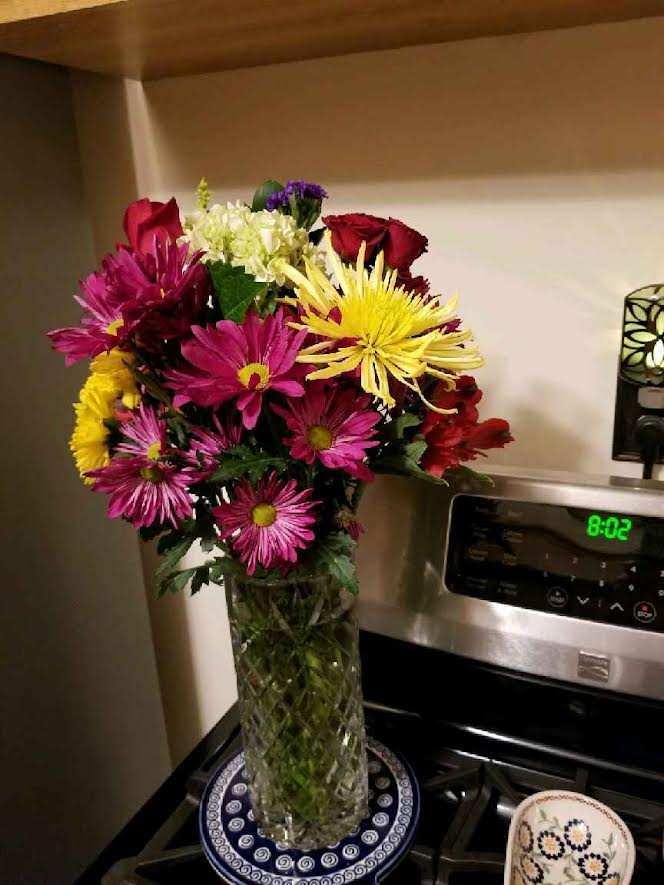 Roger C. is out this week. Get well, sir.

Not going to be able to mow this week, I’m on the IR due to the damn China virus. I was vaccinated too. Having to bring in a mower for hire to get the job done.  Good Lord willing I’ll have the Jack Daniel’s-RC cola-Raid-Sunoco no ethanol racing fuel John Deere XL 380 back out in action next Thursday. Crew chief Landry is beside himself having to sit this week out. He didn’t even bother to clean up after getting her ready to mow this week. 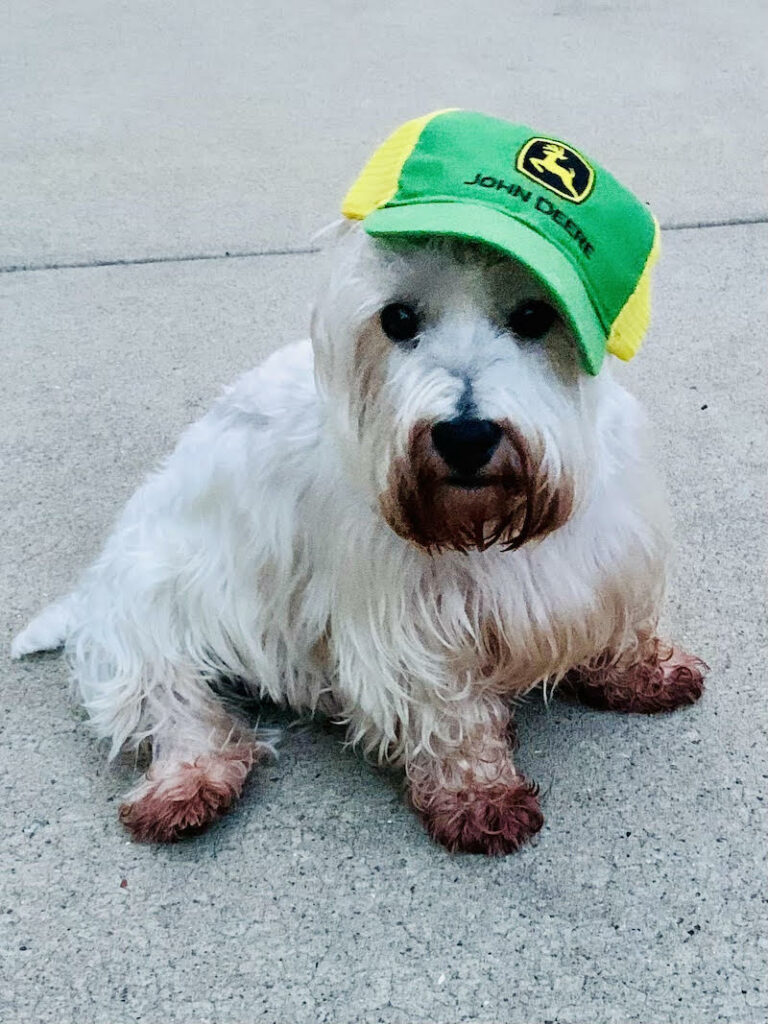 Another late night finish after a perfect day at Cedar Point with the family.  But this entry is an ode to my older brother. After locking in the true American hero, Big Pops, into the TNML family, my older brother has been desperate to join. But work obligations have prevented him from officially joining. That pleasantly changed this morning when I received the following text and photo. What does this newly honored member do after being on the road all night and getting home early on his birthday?

He remembers it’s Thursday and that is the day mowing should be done. Welcome Brian J. from Fairfield, PA and in classic older brother fashion taking tutelage credit whether deserved or not. Happy Birthday and your TNML shirt is in the mail.

“It’s Thursday. It’s my Birthday. ‘Merica! Fresh cut lawn and a mower! Oh and the guy that taught Kurtis J. from Toledo his outstanding mowing craft and dedication to the art. All of which that was passed down from the OG Mr. J 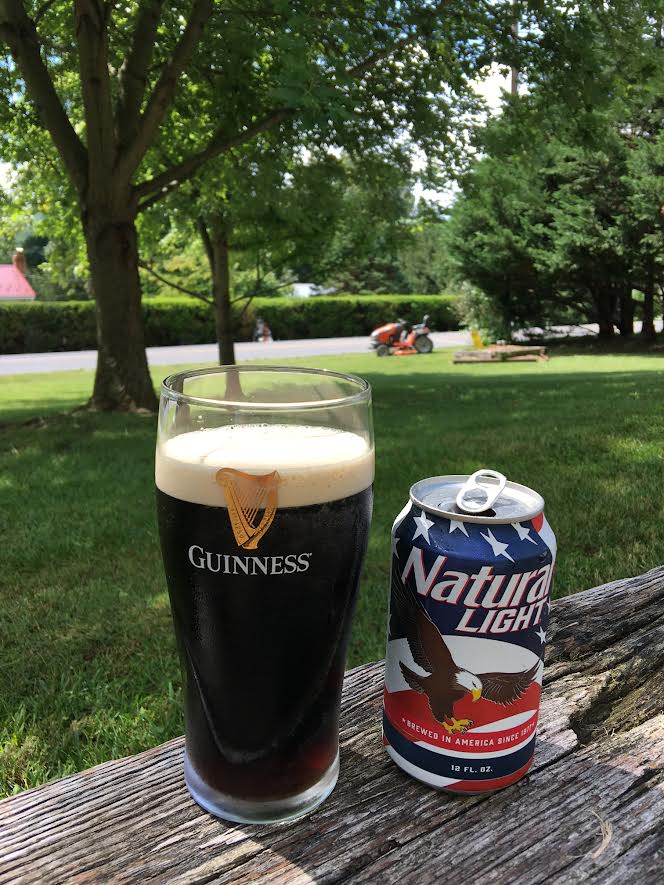 Late start with a sleepy daughter. Didn’t make it through the front, as she finally gave up and crashed. @OutKickTNML @JoeKinseyexp #TNML #SomeBeachSomewhere pic.twitter.com/iVA4mQiaTV

@OutKickTNML @JoeKinseyexp Did this one for my daughter as she heads back to Villanova tomorrow. For the family and the League! pic.twitter.com/6OuVSjrX43

Don L. in Arizona has grass to cut while people across the midwest are sitting idle:

We’ve been having a great monsoon season this year with plenty of thunderstorms rolling in the afternoons. I’ve had to start mowing twice a week to keep up with it…  thought I’d post a pic of my gear representing with my T-shirt.

Also went over to my kid’s house to help run a wire in the attic,  and within 20 seconds had blown a giant hole through the driveway ceiling. I may have to start a Friday morning drywall league

Have a good weekend

@OutKickTNML Walking out to Football practice and this is what I see. The School Grounds crew is all in on #TNML. Shout out to all the HS Grounds crews who make Friday Night Lights possible.
(No rain for 2 weeks in Avon, IN…thankful our Varsity field is turf.) pic.twitter.com/7cM7FZniBK

Zach S. dropped this message into the TNML DMs:

Got some ants I need to deal with this week. 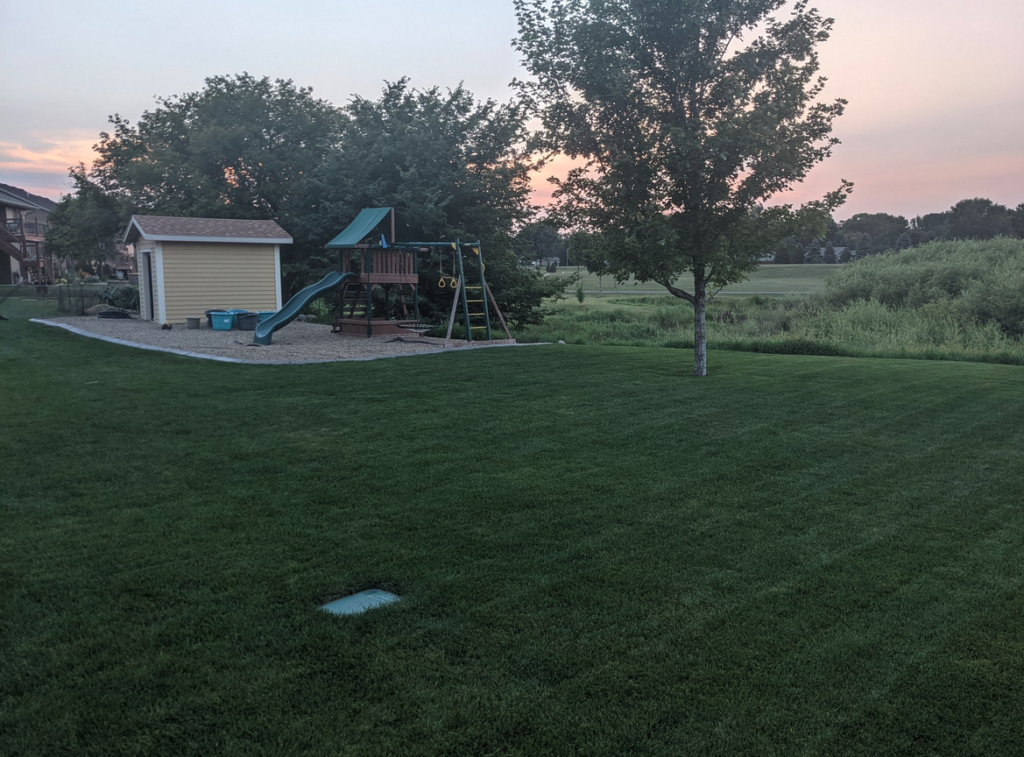 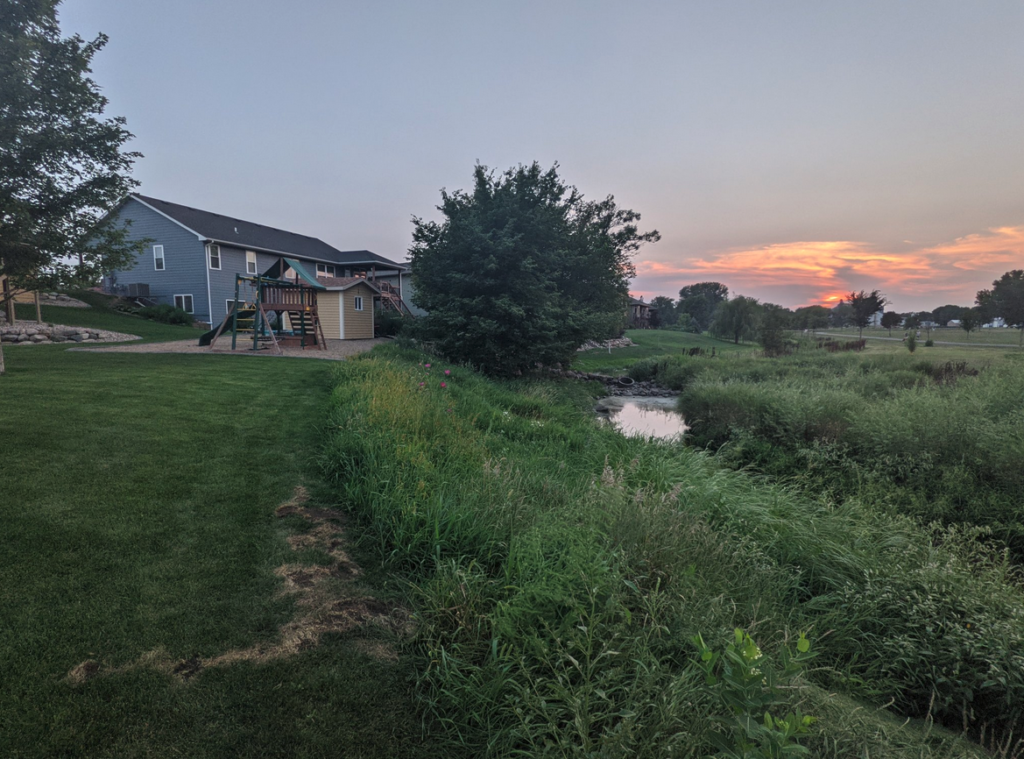 @OutKickTNML 90° days taking us through the weekend! Added a single sprinkler zone powered by a garden hose a few parts and a @HunterSprinkler to hit a couple dry spots! Works great! As always thanks to @BeaverIslandSTC for the refreshments! pic.twitter.com/bpclaNKG4w

.@OutKickTNML 86, humid & partly cloudy in WV, had to take a brief timeout to battle a weed wacker incident, but got back on the field; post game will feature cold @SamuelAdamsBeer Oktoberfests … I remembered the flag this time! 🇺🇸🍻 #TNML pic.twitter.com/KUUqzrMxrj

@OutKickTNML when you mow on Thursday it leaves time on Saturday for digging and building your new fire pit. Had to make a podium for the nectar of the gods… pic.twitter.com/639JHlX3GN