The Seattle Seahawks have initiated a full rebuild after dealing franchise quarterback Russell Wilson to the Denver Broncos. Most of Seattle is having a tough day, and that’s when Seattle Seahawks Twitter went to work with one of the best tweets we’ve ever seen: 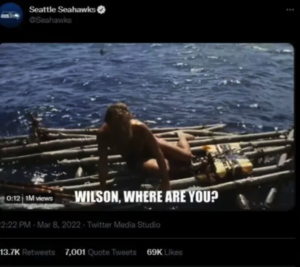 The replies are overwhelmingly positive for obvious reasons, but Seahawks fans aren’t going to like this one. Nothing makes a trade look more surprising to everyone within an organization like the team’s Twitter account refusing to hide their shock on social media for millions to see.

Gary Sheffield Jr is the son of should-be MLB Hall of Famer, Gary Sheffield. He covers basketball and baseball for OutKick.com, chats with the Purple and Gold faithful on LakersNation, and shitposts on Twitter. You can follow him at GarySheffieldJr