Did The Bears Deliver The Final Blow To Cowboys Head Coach Jason Garrett? (SI) The under-achieving Cowboys have now lost their fourth-straight game, but they remain first in the NFC East. Jason Garrett’s seat is getting warmer.

U.S. Jobs Report Is Expected To Show Employment Growth (Wall Street Journal) The U.S. unemployment rate has logged in at or below 4% for 20 straight months, the longest such stretch since the 1960s.

Mike Leach’s Contract Extended Through 2024 (247 Sports) Leach interviewed with Arkansas this week for the Razorbacks’ opening. He has also been linked to other openings by the media, including Ole Miss, Florida State and others.

Here’s What Uber Is Doing To Solve Its Sexual Assault Problem After Reporting More Than 3,000 Incidents Last Year (CNBC) The ride-hailing company and peers including Lyft have been criticized over sexual assault problems for years. The report also details new features and practices Uber is trying to prevent assaults.

Trevor Lawrence Is Playing Like A Star Again (538) After Clemson coasted past Louisville, Lawrence flipped a switch and became the quarterback everyone thought he could be.

Biden: Media, Rivals Wrong That AOC Represents Direction Of Party (Axios) Former Vice President Joe Biden told “Axios on HBO” in Iowa that he has shaped the 2020 race, faulting the media and his rivals for thinking Democratic voters are more liberal than the reality.

Meet The Magician Of NFL Broadcasts (The Ringer) You may not know Don Cornelli’s name, but you know his handiwork. He’s Fox’s wizard of the gridiron. And he’s always in the right place at the right time.

Vultures Pick Over Remains Of Harris Campaign (Politico) By the time she abandoned her run, Harris was polling at less than 4 percent nationally — with multiple polls suggesting her meager support would not go to any one candidate, but to multiple competitors.

What Would The College Football Playoff Look Like If It Went By Teams’ 2019 Viewership? (Awful Announcing) We decided to look at the current CFP rankings, run a list of how many viewers each of the current top 15 teams has drawn this year, and see how it compares to the rankings.

ESPN Radio’s Decision To Replace Stephen A. Smith Show With First Take Segments Is A Horrible Move (The Big Lead) Radio thrives on up-to-the-minute, live content. Creating a show around segments that aired earlier is the exact opposite of that. It’s not even clear who the target audience is here. 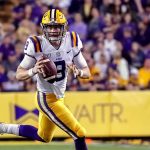