One of the big problems I have with “Must-See…Viral…Don’t Miss This One…OMG, I Can’t Believe That Just Happned” videos is when 1. The video is at least two years old and 2. The video cuts off right when I’m supposed to see a Chinese bride cheating on the groom by having sex with her pregnant sister’s husband.

This video of a Chinese wedding is all the rage this week as multiple sites have posted it and go into great detail on what viewers are supposed to see.

There, I saved you one minute of your life. Don’t believe me? Hit play and see for yourself.

According to the Chinese tongue experts on TikTok, the wedding announcer says something about cheering for the bride and groom as they come down the aisle and to watch a video about how they grew up and came together as a couple.

The premise, as I mentioned above, is that the bride cheated on the guy with her pregnant sister’s boyfriend. Supposedly the groom added in footage of the affair into the wedding video and the crowd saw the salaciousness and all hell breaks loose.

Look content maggots, that’s guaranteed to get on my last nerve. You serve up this red meat as if I’m going to see Jing and her brother-in-law Chen Netflixing and chilling with some embarrassing sex toys. I’m buckled in all ready to see Jing (name I came up with after doing a Google search for Chinese women names) in a compromising situation as her future grandpa-in-law sits there in the crowd having to watch such a scene.

As for the act of outing Jing at a wedding, it’s funny and all, but at least have someone positioned to get the actual fight as it breaks out. This is a huge mistake on Chung’s part. Now the Internet is left with this infuriating video that makes me hate Tiktok and Reddit more than I already hated those scumbag social media sites. 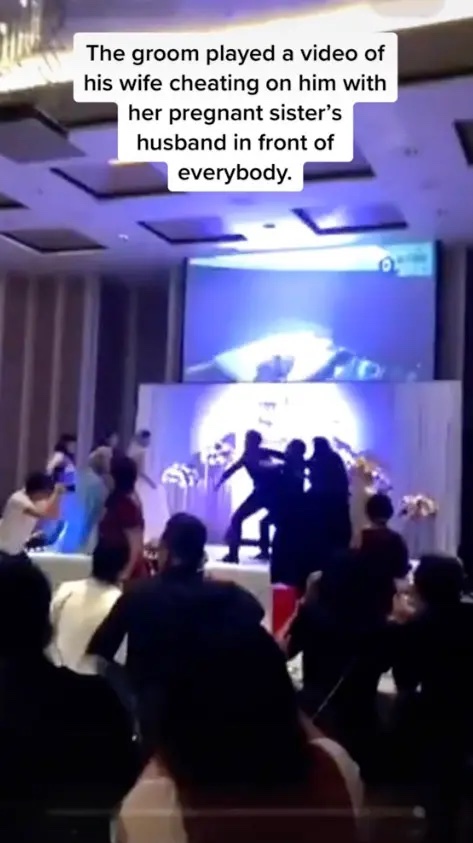