The Jemele Hill-Cari Champion ‘LOLOLOLOL we were trolling Jake Paul by asking him if it was racist to knockout Nate Robinson & you MAGAs are so stupid for not getting the joke’ story has taken a major twist. Cari came out Wednesday and claimed that Jake Paul was in on their stupid troll job.

“Y’all, [Jemele Hill] and I were trolling a troll with permission,” Champion wrote on Twitter. “This wasn’t an interview with weight. It was sarcastic- y’all need context? Bc if y’all can’t hear the laughing, the bad WiFi connection- smh.”

That’s interesting. Go back and watch the video again. She didn’t seem to be joking when she badgered Paul after Hill was finished with her schtick. Let’s go to the video. Refresh your memory here:

Question of the week: was @jakepaul KO to Nate Robinson racist? 😭 pic.twitter.com/ogSqHj764s

Here’s where things get really interesting. One of Paul’s boys, Dejaun Butler who played college football for Hawaii and ended up in the Saints and Cowboys camps for a cup of coffee (piccsix/IG), has a different interpretation of what went down during the interview. “FIRE THIS DUMB GOOFY B—-!!,” DCUT wrote on Instagram Story. “SHE F–KED UP OUR VACATION (ANGRY EMOJI) LOL. HER DOBERMAN PINCSHER FACE HAVING ASS. THIS WHY I DON’T BE SUPPORTING ALL OF THAT BLM S–T!!” 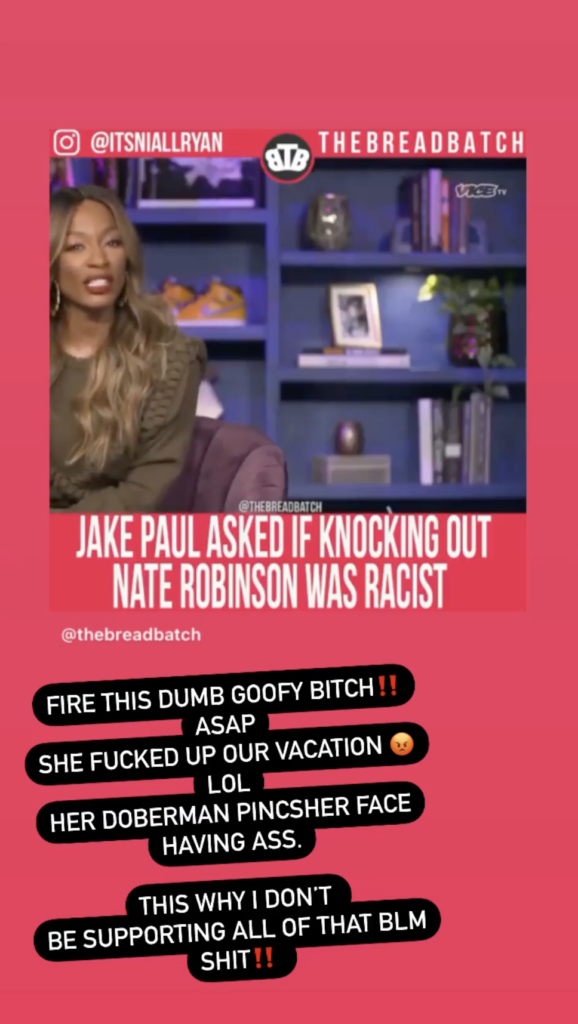 I’m just a blogger and not some professional interpretation expert, but it sure sounds like Team Paul isn’t on the same page here with Cari & Jemele. Dejaun isn’t some random guy pretending to be Jake’s long lost friend here. Butler’s on the inside of Team Paul. He’s on the private jets. He’s in the videos. He’s at the clubs.

If Dejaun Butler says Cari & Jemele f–ked up their vacation, I’ll take him at his word.

The verdict stands: Jake Paul was being baited into going off the rails and that piece of content was going to be used against him. The big mystery here is who talked him into taking time out of his vacation to bother with a Vice show nobody watches. That rep needs to be fired.