The Big 12 Conference is requiring social justice messages on all uniforms as part of their “anti-racism” campaign. This plan will go into effect as early as this week that even says “players might be on the field for the National Anthem.”

“We want to start a conversation” quickly transformed into forced action didn’t it? A movement that seems less about a dialogue and more about control.

The Big 12 will begin an anti-racism, anti-hate campaign this week, which will include a social justice message on the front left side of football jerseys and a unity patch on the back of helmets. https://t.co/S9lO8CXlFQ

Big difference between allowing anti-racism messages rather than insisting on them. A literal stripping of the rights for any player to disengage with the movement. Remember the first amendment? The Big 12 isn’t interested in giving grown men the choice, so the conference made it for them.

“Each of our schools will be doing a unity message as part of its pregame show”, Commissioner of the Big 12 Bob Bowlsby said to ESPN.com.

“We want to make sure that student-athletes can find their voice and use their voice. Yet we also have to manage it so that there are no significant disruptions of the contest as well.”

Players are suddenly encouraged to use their voice, but they have no say in playing in a uniform with slogans draped across their chest. Black Lives Matter stickers can make their way onto helmets and players that disagree with the movement are expected to shut up and play football.

Feels like the conference is telling players to step into the relaxation zone like Derek Zoolander to be hypnotized. Control is being disguised as a social justice movement and it won’t play well with their audience.

What the Big 12 Should be doing

Freedom of choice for all players to demonstrate as they see fit should be the move. That includes any attempt to demonstrate for the children killed in the streets of our inner cities that have been forgotten about by BLM leaders. Ratings will plummet regardless of the angle you take on social justice in sports, but let’s keep it consistent.

Majority of sports fans use their three hours of football Saturday as a sanctuary away from real-life issues. Focusing on football during football season isn’t for a lack of caring, but to keep their sanity.

If people want to solve social issues in their communities, turn on FOX or CNN. Figure out which issues need our support on political platform these discussions were designed for. Forcing stickers and banners down every player and audience member’s face shuts down discussion.

How are we going to feel that we’ve made any progress when we can use anecdotal evidence as proof America sucks? Hardly any college football fans turn on a game to hear about how bad this country is. To be lectured on the history of this country. People flip the T.V. on to be entertained and in this case, to watch football.

United is a funny way for the commissioner to describe demonstrating against the beliefs of more than half his audience. He was pressured by the movement (which was the point) and now seeks to ruin the last thing politics hadn’t completely destroyed. Sports.

Seems that safe haven has completely gone away as we draw closer to a country where you can’t escape Thanksgiving chat. A real shame. 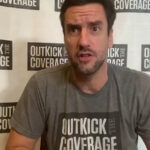