I’ve long been in favor of early down efficiency as a key driver for success in the NFL offensively.  As my analysis showed, converting first downs before reaching 3rd down is twice as correlated with wins as converting well on 3rd down.  But a recent NFL transaction this offseason had me looking at 3rd down conversions moreso than early down conversions.  When the Seattle Seahawks acquired TE Jimmy Graham from the New Orleans Saints, I initially thought it was a big move.  So did much of the NFL, particularly the fantasy world. But I was wrong. It wasn’t a big move. It was a HUGE move. That said, right now, separate fantasy from reality. Jimmy Graham’s fantasy value won’t be as strong as it was in New Orleans.  But his contribution to the Seahawks will make them significantly more potent than they were the last couple of years, for reasons we’ll dig into.

Since Russell Wilson came to the Seahawks and became the starting quarterback, the team has recorded the best record in the NFL when NOT converting well on 3rd down.  The NFL average for 3rd down conversion rates since 2010 is approximately 38%.  In other words, 38 out of 100 times on 3rd down (and any distance) teams gain first downs and 62 times they are forced into 4th down.  The Wilson-led Seahawks have won 65% of their games when converting below that 38% average.  Its the best win rate in the NFL.  The next closest team is the Patriots, who won 59% of their games when converting sub-38% on 3rd downs in a given game.  Collectively, the NFL has won just 36% of their games since 2012 when converting sub-38% on 3rd downs.  So the Seahawks winning 65% of these is extremely unlikely.  It’s insane.

In 2013, Wilson had solid 3rd down stats when passing to his TEs, predominantly Zach Miller.  When passing to TEs in 2013, Wilson went 20/26 for 220 yds, 2 TDs and 0 Ints.  That’s a 127 rating.  But in 2014, with no Zach Miller, Wilson struggled tremendously and did not target his TEs nearly as often or with as much success.  The ability to find that reliable TE target is essential to Russell Wilson on 3rd down, and thus, the success of the Seattle offense on 3rd down.

Graham really was a godsend for Brees.  A 109 rating when passing to Graham and 0 sacks on 3rd down, as opposed to a 76 rating when passing elsewhere and 9 sacks.  Graham’s ability to win quickly at the line of scrimmage to allow his quarterback to complete passes while avoiding sacks is tremendous.  Not only do these numbers demonstrate how helpful Graham will be for Russell Wilson, they also show how badly Brees might struggle unless they find a tight end who can somewhat occupy the role that Graham fulfilled as a Saint.

I’ve written before about how good the Seahawks have been on 3rd and short.  They have been one of the best short yardage teams when running the football in the NFL.  Last year, on 2nd thru 4th down, needing 1-2 yards for a 1st down, they converted 76% of rushes into 1st down, the 2nd best rate in the NFL.  And they ran the football in these situations 75% of the time.

But their real struggle on 3rd down was 3rd and medium.  When running on 3rd and 3-6 yds to go, they converted 67% first downs, 4th best in NFL.  But when passing in these situations, they converted just 44%, good for just 24th in the NFL.  And Wilson’s passer rating was only 81.6. 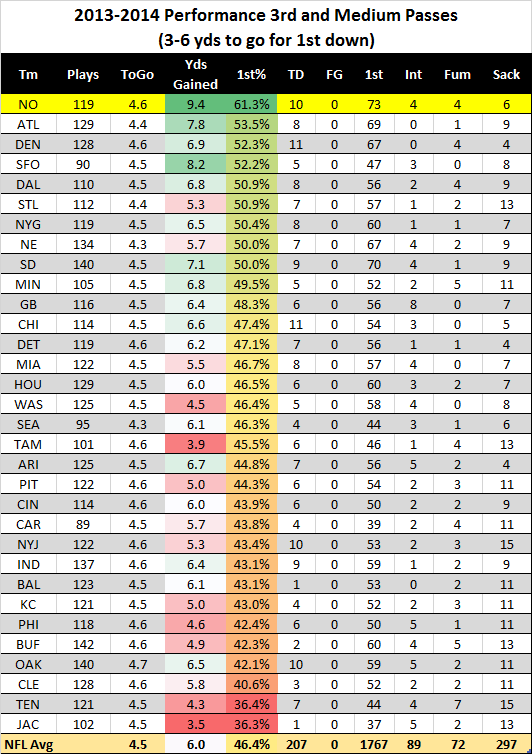 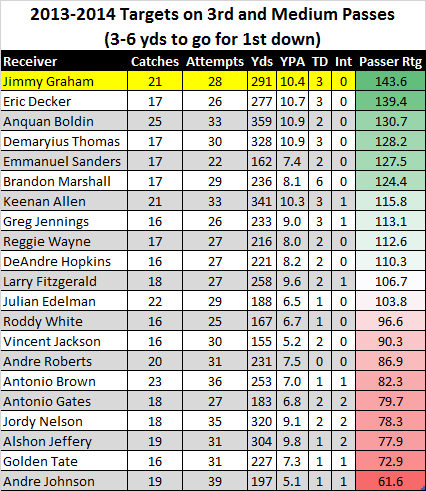 The last 2 years, Jimmy Graham has been the NFL’s best receiving weapon on 3rd and medium, and he’s helped set the Saints offense far above average as the NFL’s best in converting these plays into 1st downs.  Now he gets to do the same in Seattle.

The Importance of 3rd Down in Seattle

Thus, because of the strength of their defense, considering game theory, it’s vital to convert on 3rd downs. Sometimes, it simply means that a drive in the 4th quarter with a lead can bleed more time off the clock as opposed to punting. That alone will be more likely to secure a win for the Seahawks than it would for many teams.

By landing Jimmy Graham, the Seahawks theoretically should be able to solve their biggest 3rd down weakness of 2014:  passing on 3rd and medium.  His ability in that situation was insane for the Saints when Drew Brees had the ability to throw to Graham: a 143 passer rating to Graham, an 86 rating to other receivers.

And considering how tremendous Seattle is on 3rd and short situations, I really expect Graham’s presence to be far more meaningful than most casual fans believed it would when they made the move.  I don’t believe Russell Wilson will post Drew Brees-like fantasy stats, nor do I believe Jimmy Graham will post fantasy stats like he did in New Orleans.

But for the Seahawks, his presence is far less about fantasy stats and far more about reality difference-making.  And he will be a vital difference maker on 3rd down for the Seattle Seahawks in 2015.  The Seahawks were the NFL’s best team when posting a below-average 3rd down conversion rate (17-9, 65% when converting sub-38% of 3rd downs).  Far more games in 2015 and beyond should see an above average 3rd down rate.  That means 83% wins for Seattle (when converting over 38% of 3rd downs, the 2nd best rate in the NFL).  And that means another trip to the playoffs, the NFC Championship game, and possibly another Lombardi trophy.